Tickling people with his feathers.
Fighting with Wander.

To force people (and eventually the universe) to "laugh" by using his tickle machine.

To obtain the "Ring of Invincibility (both failed).

Dr. Screwball Jones is a character from Disney's Wander Over Yonder, first appearing in Season 2 as the main antagonist of the episode "The Boy Wander".

He was voiced by "Weird Al" Yankovic, who also voiced The Learnerer in WordGirl and Darkseid in Teen Titans Go!.

Dr. Screwball resembles a floating yellow banana with a clown wig, a pink nose, a red bow tie with white polka dots, a black top hat, black glasses, and a doctor's head mirror. He also has a large black mustache which also take the place of arms.

Screwball Jones is similar to Wander, in that he wants to make everyone in the universe happy. However, he is maniacal and certifiable, so he plots to force everyone in the universe to be happy by taking over it, which clashes against Wander's more care giving nature. He is fond of puns and is able to create them with ease. He is very insistent and vociferous of his doctoral status and is able to realize when a situation is ironic. He admires polka music and is quite fond of the accordion. He is unable to resist a good gag and will not pass up a chance to use it to make as many puns as possible, even if he is on the verge of victory.

Wander mentions Dr. Screwball as being a villain of his past. Like Wander, his goal is to spread joy across the universe, but does so by forcing people to laugh, which Wander is against since he believes happiness is meant to be found freely. Screwball is known to constantly tell jokes and his schemes involve practical joke materials.

Telling by a missing feather and a whoopie cushion, Wander realizes his old foe has returned. Going undercover, he goes on a quest to take down Screwball. The villain, meanwhile, steals feathers from a museum and an alien race. He later introduces himself, revealing to have created a tickle machine, which he inflicts on an entire planet, as well as Lord Hater and Commander Peepers. When Sylvia falls victim to Screwball, he and Wander engage in a musical duel/confrontation. Just as all hope seems lost, Sylvia manages to break Screwball's machine, causing it to backfire on him as his blimp is sent away.

In this double-length episode, Screwball appears as one of the many villains who have come to battle over a supposedly powerful ring. He tries to attack Wander but is defeated once again.

Dr. Screwball is one of the villains to be imprisoned by Lord Dominator.

Dr. Screwball managed to escape from Dominator's ship along with the rest of the villains and is shown talking with Mandrake the Malfeasant, & Little Bits. 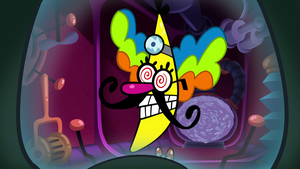