Kill the Kamen Riders and rule the world.

Dr. Shinigami is a leading scientist of Shocker serving as one of their high commanders and a major antagonist in the Japanese TV series Kamen Rider. He has extensive knowledge of both science and mysticism, which he uses to aid Shocker in their campaign for world domination. Through his cybernetic modifications, Shinigami has the power to transform into the squid kaijin Ikadevil.

He later returns in Kamen Rider Decade, appearing as a major antagonist in the movies All Riders Vs. Dai-Shocker and Movie War 2010. Here he is revealed to be the true identity of Eijiro Hikari, the father of Natsumi Hikari and owner of Hikari Studio. He later returns again as a supporting antagonist in Kamen Rider x Super Sentai x Space Sheriff: Super Hero Taisen Z in his new form Space Ikadevil as a member of Space Shocker.

Summoned from Switzerland, Dr. Shinigami took command of Shocker's Japanese branch after Kamen Rider 2 destroyed Colonel Zol. He is mostly seen in his cape, holding a wand. He is able to transform into Ikadevil, a squid monster. In episode 68, he kidnapped Tobei Tachibana and forced him to train him so he can destroy Kamen Rider 1. As a result, Tobei discovers his weak spot: Ikadevil's head! When Kamen Rider 1 came to challenge him, Dr. Shinigami discards his cape and becomes Ikadevil to deal with Ichigo once and for all. Kamen Rider 1 overpowers Ikadevil by giving a Rider Chop on his head, and finishing him off with Tailspin Shoot. He is briefly brought back to life for a Destron operation, thinking he was to replace Doktor G, along with the other Shocker and Gel-Shocker officers. He along with the other resurrected officers is killed when the Destron base they are in self-destructs.

Dr. Shinigami was later revived alongside Colonel Zol, Ambassador Hell and General Black by Doktor G to assist him in a Destron plot to wipe out the population of Japan with toxic gas. He was later killed again in the explosion of the Destron base.

In the Decade continuity, Dr. Shinigami was an agent of the Dai-Shocker organization founded by Tsukasa Kadoya, Kamen Rider Decade. When Tsukasa lost his memory, Shinigami posed as Eijiro Hikari whose photo studio is the means of accessing the many other Kamen Riders' worlds. Though he assist Tsukasa in his mission, Eijiro revealed his true form as Dr. Shinigami when Tsukasa regained his memories. Though defeated by Decade, Diend, and Momotaros, Eijiro survived with no memories of being Dr. Shinigami. As Decade began his attack, Eijiro meets Narutaki who restores his memory as Ryubee Sonozaki gives him a Gaia Memory with full knowledge on Dr. Shinigami to transform Eijiro into Super Dr. Shinigami to lead the reformed Super Shocker. However, Super Doctor Shinigami reverts back to Eijiro as the Memory ejects out of him as the Super Crisis Fortress crashes with Natsumi saving him.

Due to a change in history caused by Ankh leaving a O Medal behind in 1971, Shocker achieved its goal of world dominion with the Shocker Greeed which defeated the Double Riders, and new members from the various groups that would had manifested in the normal timeline after Shocker's destruction. Ikadevil was among the many villains who were part of the this alliance. When the riders united against Shocker, he along with Ganikomol and Garagaranda was destroyed by Kamen Riders Den-O and New Den-O.

Ikadevil later returned as one of the sub-leaders of Space Shocker in Kamen Rider × Super Sentai × Space Sheriff: Super Hero Taisen Z, with a new form called Space Ikadevil. Alongside Space Spider Man, Space Ikadevil spearheads a hunt for the mysterious robot Psycholon. He later executes Groundain and Skydain for getting in the way of him finishing off Geki Jumonji, mocking their sibling bond, only to be destroyed by Gavan Type-G and GokaiSilver right after.

Space Ikadevil was later revived by Shocker. He appeared to attack the Kyurangers' world but was destroyed by Shishi Red and Kamen Rider Ex-Aid.

Space Ikadevil appeared as part of the Shocker forces that emerged from the Game World to cause havoc after the "Chou Shocker Taisen" bonus stage was triggered. Space Ikadevil was later destroyed by the Zyuohgers.

Space Ikadevil appeared as one of the members in the revived Shocker army in the Game World secretly summoned by Kuroto Dan as part of a scheme to revive himself. After the Game World was destroyed by Kazuma Kenzaki's Joker status, Ikadevil was part of the army summoned by Genm Totema to do battle against Ex-Aid and the second Gorider team one last time. 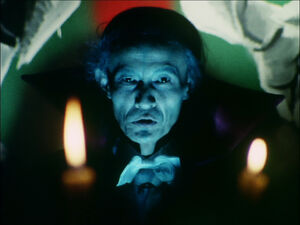 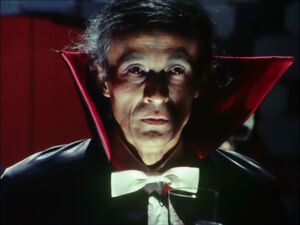 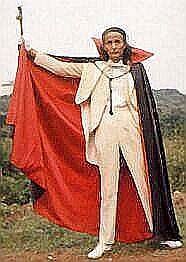 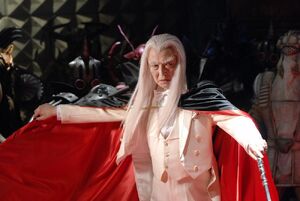 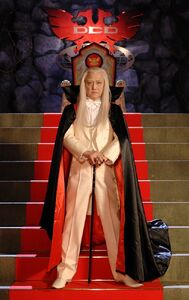 Dr. Shinigami in All Riders vs. Dai-Shocker. 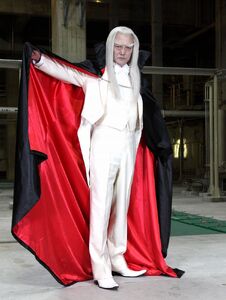 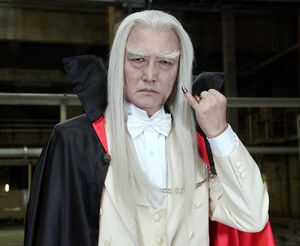 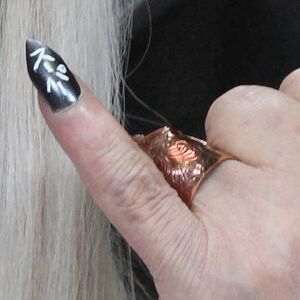 Close up of Super Dr. Shinigami's finger.
Add a photo to this gallery 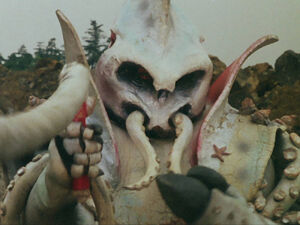 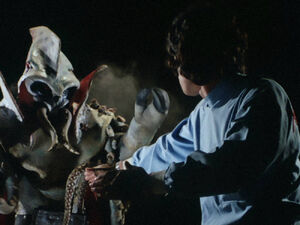 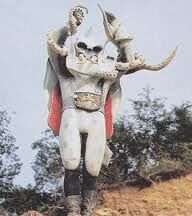 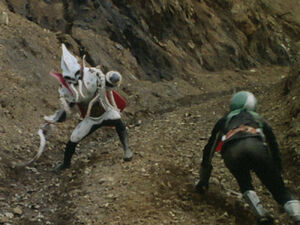 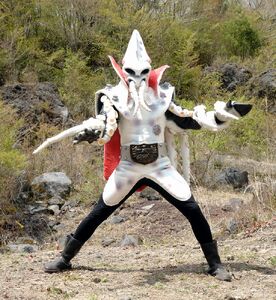 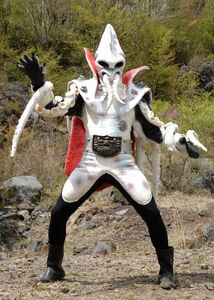 Retrieved from "https://villains.fandom.com/wiki/Dr._Shinigami?oldid=4213035"
Community content is available under CC-BY-SA unless otherwise noted.