Dr. Simon Fessenden
Doctor (by his henchmen)
Creator of a New World (by himself)
Mad Doctor

Kill the player (both failed).

Dr. Simon Fessenden is the main antagonist and final boss of the arcade game Cadillacs and Dinosaurs, based on the comic series Xenozoic Tales. He is a mad scientist who wants to destroy the world and create a new one inhabited by dinosaur-human hybrids which he created.

Fessenden is the leader of the Black Merchants, a group of mercenaries who capture and kill dinosaurs for him. It is eventually revealed that Fessenden is creating reptile-human hybrids and is about to spread them over the world so he can create what he believes will be a more improved and better planet. Jack Tenrec and his friends realize that he is insane and must be stopped. They head to the doctor's laboratory which is underground. Eventually, they find Fessenden and prepare to fight him. In the first part of the final battle he transforms himself into a mutant dinosaur hybrid similar to Morgan/Morgue (being green instead of blue), but is defeated easily. However, he then mutates again, this time into a hideous reptilian creature with two dinosaur heads that breathe fire and his own original head and arms in its chest. After a long and difficult battle, Fessenden is defeated again, this time once for all. Just before dying, he says his last words, and then falls lifeless and explodes into pieces (probably because his body couldn't handle the effects of his serum), but not without triggering his self-destruction device which causes the lab to explode. However, Jack and his friends manage to escape before it's too late.

Fessenden in his normal human form.

Fessenden's first dinosaur transformation, which is a recolor of Morgan/Morgue. 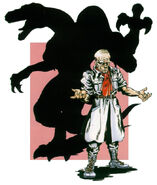