Take over and destroy Monstro City.

Tragic Monger
Dr. Strangeglove (also known as Lavender Troggs) is the main antagonist in the MMO Moshi Monsters. He turns player's pets, Moshlings, into his minions known as Glumps. He has appeared in Super Moshi Missions 2 and 3 and has not been seen since his zeppelin malfunctioned and fell, exploding to the ground. He stole the celebrity Modog. He also appears as the main antagonist of Moshi Monsters: The Movie.

In Moshi Monsters: The Movie, he is voiced by Ashley Slater.

Dr. Strangeglove has a tragic backstory with Moshlings, the reason he has such a hatred of Moshlings is because a Musky Husky once bit his hand off, which is one of the primary reasons he is evil, his hatred ever since has grown and grown, to the point that the Moshlings won't even come near him because of his hatred, and vice versa.

Furi and Strangeglove were once best friends, they studied together, but after Furi realized that Strangeglove was experimenting on the Moshings, which he happened to be excellent at doing, Strangeglove got hired by the C.L.O.N.C. Leader because of being so good at it, Strangeglove dropped out of university.

Strangeglove became a bit narcissistic, and overestimated his talents, he confronted Furi on the big mountain known as Mount Sillimanjao, and proposed an idea he got for not so long ago about taking over the entire world, Furi was confused and declined, after this, an unseen event happened, Strangeglove fell off the mountain, and was not to be seen for a very long time.

Once Strangeglove finally returned, he started experimenting again, but this time he was more evil, he created the evil creations known as Glumps and continued his abduction of Moshlings, Elder Furi had formed "The Super Moshis" in which he used to defeat Strangeglove, this was a start of a rivalry.

Whenever Furi confronts or talks with him in that regard, Furi always calls Strangeglove Lavender Troggs or simply Troggs, which is a way of mocking Strangeglove considering he dislikes that name, and "Sweet boy does not exist anymore".

Another way of Furi to mock him is to have multiple of Musky Huskies in his cabin, because it reminds him of why he is evil.

Even though creating them, he didn't really create them because he wanted to care about them, he mostly uses them for slaving and using them for his own goal to take over Monstro City, he is very rude over them, and while it is weird that he is so arrogant with them even though he created them, the reason for it is most likely also because he did after all create them, and they should be grateful he even created them. Even though often bullying the Glumps, most Glumps will still follow his rules and be loyal to him, mostly because of fear but also because they have to.

Strangeglove is a pretty stereotypical tyrant-scientist villain, which is what he is a parody on too, his hatred for Moshlings has taken over his life and his primary goal in life is to simply rule over Monstro and defeat the moshlings.

Even though using fear as an advantage, he also has a slightly affable and weak nature, whenever Furi calls him Lavender Troggs he feels ashamed, and feels weakness. 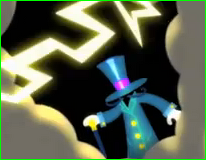 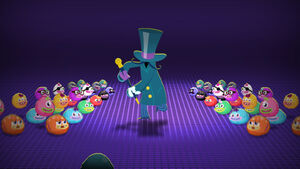 Dr. Strangeglove and his Glumps. 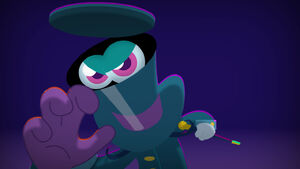 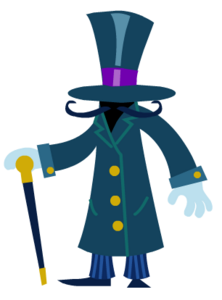 Dr. Strangeglove, as he appears in-game. 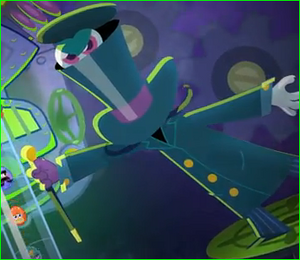 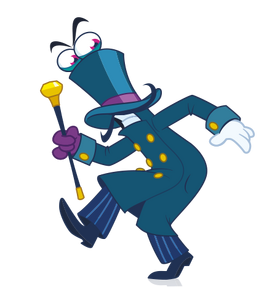 Dr. Strangeglove as he appears in Moshi Monsters: The Movie. 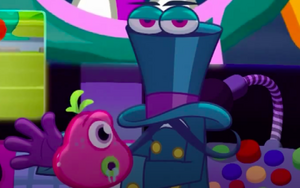 Dr. Strangeglove looking at the audience.