Dr. Strangelove: or How I Learned to Stop Worrying and Love the Bomb

Merkwürdigliebe, or better known by his citizen name Dr. Strangelove, is the titular central antagonist of the late Stanley Kubrick's 1964 black-comedy film Dr. Strangelove (or how I learned to Stop Worrying and Love the Bomb). He is a nuclear scientist and former Nazi who is President Muffley's scientific adviser and a U.S. weapons strategist.

He was portrayed by the late Peter Sellers, who also portrayed Clare Quilty in Kubrick's film adaptation of Lolita.

Merkwürdigliebe was born in Germany and became a Nazi during World War II. He lost his right arm and broke both of his legs during the World War, and had to sit in a wheelchair as a result. The Nazis during some point, had given Merkwürdigliebe a mechanical arm that had a mind of its own and still had some of his Nazi traits from before. Trying to put his Nazi past behind him, he had moved to America hoping to live a normal life, and changed his name to "Strangelove", a loose translation of his German name.

During, one point, he had met with President Muffley and impressed him with his scientific expertise and knowledge of the German missile systems. Muffley hired Strangelove to be his scientific adviser and a U.S. weapons strategist.

When the deranged Brigadier General Jack D. Ripper unleashes bomber planes form reaching Russia, which would set off a Doomsday Machine the Russians built that would destroy all life on Earth, Muffley asks Strangelove to explain the Doomsday machine's functions and purpose for being built. Strangelove states that the machine is easy to trigger but couldn't be untriggered, then he asks why the Russians had kept the machine a secret, to which a Russian envoy answers the Premier loves surprises.

Ripper's subordinate Captain Mandrake manages to obtain the recall code and sends it to the bomber planes, telling them to turn back. While Muffley and his advisors cheer, Strangelove is seen mysteriously in the shadows. However, the team had missed one of the planes that was didn't get the code because its CRM-114 mechanism was destroyed by a missile. The crew in the bomber plane didn't know they were to turn back and managed to reach their target.

Back in the War Room, Strangelove makes an abrupt turn - signaling the major turn of events for the world. He swings around in his wheelchair from the Big Board, explaining that not all was lost. After making calculations with a circular slide rule, he proposes an idea for a 100-year plan for survival. Life can continue underground until the radioactivity diminishes. But he couldn't stop himself when he accidently calls the President "Mein Fuehrer" while dreaming of an underground bunker world populated by "top government and military men" after the impending apocalypse.

His thoughts of personal survival underground after the end of the world energize Strangelove. His left fist slams down and his black-gloved mechanical right arm reflexes into an unintentional Nazi salute right before he pulls his right arm back into his lap, fighting off his own, spring-loaded gloved hand with his good arm. With an absurd grin on his face, his own sexual pleasure is kindled as he excitedly talks about selective sexual breeding at a ratio of 10 females to one male. Society's male elite would be surrounded by a contingent of beautiful women in underground hideouts. Their couplings would eventually repopulate the planet.

Muffley is concerned about the depression of the grief-stricken survivors, but Strangelove is still calm, though he had to beat up his mechanical arm with his left before answering. He proposes that everyone would survive inside the mine and his right arm again reflexes into a Nazi salute, then tries to strangle him after he pulled it back. Strangelove's future vision of "strange love" imagines love-less, assembly-line, mechanical sex, in a world in which everyone could "Stop Worrying and Love the Bomb."

Ecstatic over the total annihilation of the Earth, Strangelove "resurrects" himself as he accidently stands up, and realizes he can walk again. 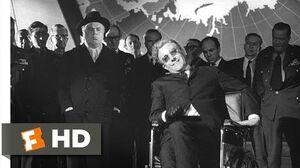