Leader of the Thorn Cult

Use Michael Myers as his own personal killing machine (eventually backfired).

He was portrayed by Mitchell Ryan, who also played General Peter McAllister in Lethal Weapon.

His first appearance was in Halloween, telling Dr. Loomis that Michael Myers could not have gotten far because he cannot drive a car. Loomis says that maybe someone at Smith's Grove gave him lessons. (This is ironic because it is likely that Wynn was the one who taught him how to drive.)

In the 4-6 timeline, it is revealed that Wynn (often seen walking around as the "Man in Black") is the leader of the Thorn Cult, and placed the Curse of Thorn on Michael, which is why he is seemingly invincible and wants to kill his family. Wynn was experimenting with pure evil, but as he was planning something with the other members of the cult, Michael grew tired of being used by the Thorn Cult, so he grabbed a machete and killed them all. Wynn was killed as well, though his death was never shown onscreen.

It is implied in the room containing baby fetuses and rune translations that Dr. Wynn and his doctors were not really the ancient (possibly extinct) Thorn Cult at all, but merely scientists posing as the Thorn Cult, Wynn cursing Michael to experiment with the Curse of Thorn (which apparently he translated) and performing in vitro fertilization (one such instance being Jamie, which was his first success) in an attempt to clone Michael and spread the curse's evil power. Presumably, Michael's reason for killing them all was because he realized that they were not a real Thorn cult and were using him only for their own twisted experiments.

In an alternate ending, Wynn survives long enough for Michael to attack and swap clothes with him. When Loomis arrives to check on the body and confirm Michael's death, he discovers Wynn who transfers his role as Michael's protector to Loomis, causing his old friend to scream as Michael (dressed in Wynn's clothes) looks back before continuing on. This scene casts considerable doubt on the fates of Michael, Loomis, and Wynn.

As the one who placed the Curse on Michael, Wynn is indirectly responsible for the deaths of many victims. However, he has only directly killed a few victims. 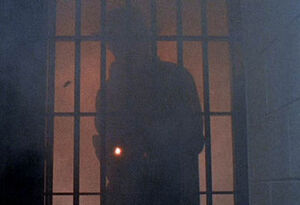 Dr. Wynn (as the Man in Black) breaking Michael out of jail.

Wynn moments before his death.

Wynn's death in the Producer's Cut.
Add a photo to this gallery

Retrieved from "https://villains.fandom.com/wiki/Dr._Terence_Wynn?oldid=4146973"
Community content is available under CC-BY-SA unless otherwise noted.