Knowledge of science and technology

To have cheese and appease his second brain

To be the most feared villain in Fair City (achieved)

Holding the city and mayor hostage

Dr. Two-Brains is the main antagonist of the PBS Kids show WordGirl.

He is an evil scientist that has a penchant for cheese and committing any crime involving said dairy product. He is also the archenemy of Wordgirl.

He is voiced by Tom Kenny, who also voices The Penguin in The Batman, Starscream in Transformers: Animated, Mumbo Jumbo in both Teen Titans and its spin-off Teen Titans Go!, and The Ice King from Adventure Time.

Dr. Two-Brains was once a friend of WordGirl, known as Professor Steven Boxleitner, a kind, but easily distracted scientist. He made a device that was supposed to help people read into the minds of rodents. While doing this experiment, he was hooked up to a lab rat named Squeaky. When Boxleitner wasn't looking, Squeaky pushed a button which said "Holy Cow! Don't Touch This Button!" and the result fused his mind with Squeaky's. This caused Dr. Two-Brains to come into being. Still, on occasion, WordGirl does try to tell him to fight the other brain, but to no avail. Dr. Two-Brains' main motive is to steal cheese in most of his appearances or threatens to turn the entire city into cheese. As a villain in this show, he takes great pride in being evil, and on one occasion tries to improve on his image when a new villain takes his spot for the city's number one villain. He's also one of the few villains who have found out WordGirl's secret identity, and uses this advantage to kidnap her and her family. However, he is later hit by his amnesia ray and thus forgets WordGirl's secret identity, as does her family when they also get hit by said weapon. Also, like WordGirl, Two-Brains seems to know most of the words in the show, and even defines a few as well. Also, because of his other brain, his primary weakness is cats.

Steven Boxleitner was a brilliant scientist with chestnut brown hair and dark eyes. As Dr. Two-Brains, however, he has white hair and red eyes, along with whiskers and a mouse brain fused to the side of his head, thus earning him the name "Dr. Two-Brains". 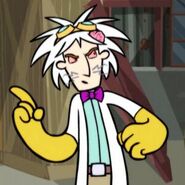 Mr Big and Two Brains had mind control everyone in the city with bunny buttons.

Retrieved from "https://villains.fandom.com/wiki/Dr._Two-Brains?oldid=4135323"
Community content is available under CC-BY-SA unless otherwise noted.