Villains Wiki
Register
Don't have an account?
Sign In
Advertisement
in: Doctors and Scientists, Animal Cruelty, Movie Villains,
and 28 more

He was voiced by Steve Mackall.

He originally used Martin for one of his neurological experiments and brainwashed him to insanity. It was not until Timmy made it to NIMH that Martin brainwashed him and made Dr. Valentine think that he was a dog.

Dr. Valentine is a chief researcher at NIMH, and has come to the Fitzgibbons' farm to search, in and around it, for any of the escaped rats.  He's brought one of his assistants with him, and they're both determined to find and capture as many rats as possible.

It was revealed that he captured the lost six and did his experiments on them and brainwashed them, including the humans themselves which made him act like dogs. He brainwashed Martin and they initially worked together before Martin betrayed him by brainwashing him and made him think that he was a dog. It is unknown what became of him after Martin was defeated, or if he survived the destruction of the building.

Dr. Valentine is a sinister fellow, with sunken eyes and a cold demeanor. 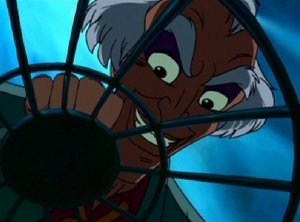