Defeat Vic-Viper and conquer the universe (all failed)

Dr. Venom is a major villain from the Gradius series, acting as the main antagonist in the Nemesis spin-off series for the MSX. He later returns as the main villain in Gradius V and acts as a supporting character in the prequel Gradius Rebirth.

Venom is one of few survivors from a race known as the Wreek, who had special powers. He became director of the Space Science Agency after the first Bacterian War, and was the head creator of the Vic Viper and Metalion spacefighters. However, the Gradian Government only wanted to use him and the others from his race. Little by little, Venom grew a deep hatred towards the Gradius people. He started conducting illegal experiments, and led a coup d’état to overthrow the Gradian Government among his followers. He failed, and was condemned to live the rest of his life in the prison planet Sard.

During his imprisonment, he contacted the Bacterians and made a deal with them. With their help, he escaped Sard and created a massive fleet to attack Gradius and the neighbor planets. The Gradian Space Agency send the same Metalion Venom helped to create to stop him, piloted by the skilled colonel James Burton. After one year of war, Venom is defeated and declared Killed in Action. Some years later he reappeared, this time leading the recreated Salamander Force to attack Gradius once again. He was once again defeated, and wasn’t found.

Venom hides himself and starts to rebuild his forces for a new plan to take over Gradius. Two thousands years later, Venom begins his plans, creating a time portal to kill James Burton in the past, so there would be nobody left to stop him. David Burton, descendant of James, is sent after him using the newly developed Vixen fighter. Venom uses the help of Gofer who went to the past with the Bacterian forces while Venom remained in the present. David defeats Gofer and returns to the present, where Venom, angered by his failure, launches a last attack against the unsuspecting James, who luckily activated a force field in the last second, foiling Venom’s plans for good. Venom’s fate was unknown after this.

Some centuries later, the planet Gradius is once again being attacked by the Bacterians, so the Vic Viper spacefighter is sent into action. During his mission, a large battleship being followed by another Vic Viper appears from a portal. The second Vic Viper asks for the help of the current one to assault the battleship from two different points, or there would be no future for both of them. In the core of the battleship was a large brain with two eyes. As the current ship destroys one eye, he left to continue on his mission while the future one stayed there. As it arrives at the base of the Bacterions, he discovers that the only way to destroy it was to enter by the opposite side and attack from two different points, so he creates a time portal, sending both him and the battleship to the past, where the past ship helps him to take on the large brain controlling the Bacterians. As he destroy the remaining eye, the brain reveals that he is actually one of many parts of Venom that are scattered all over the universe, and that one day one of these parts will exact his revenge on Gradius. 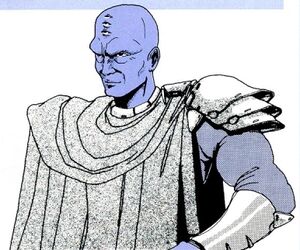 The core of Venom's Warship in Nemesis 2/Nemesis 90 Kai. 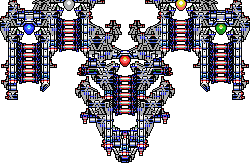 The Metal Slave, which Dr. Venom pilots in Salamander (MSX). 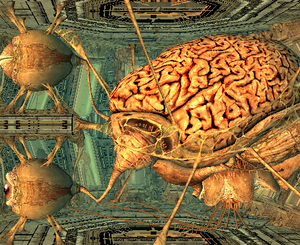