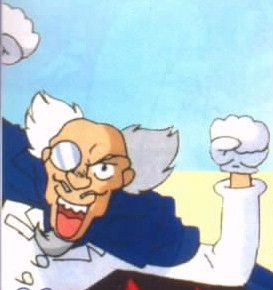 Dr. Warumon (ワルモン博士) is a major villain from the TwinBee series, acting as the main villain in TwinBee: Rainbow Bell Adventures and all subsequent games.

Described as the evilest man in the world, Dr. Warumon is an evil scientist and rival of Dr. Cinnamon, the creator of the TwinBees. He seeks to take over the world with his mechanical creations, having built an entire army of evil robots as well as the EvilBees, evil counterparts to the TwinBees under his control.

Dr. Warumon looks just like your stereotypical mad scientist, with a bald head with white hair on the sides (which make him look similar to Dr. Wily) and wearing a monocle and evil-looking cape. His name literally means "Evil Doctor".

Retrieved from "https://villains.fandom.com/wiki/Dr._Warumon?oldid=3442915"
Community content is available under CC-BY-SA unless otherwise noted.