Researcher
Designer and builder of the Event Horizon

Salvage the Event Horizon and find its crew (formerly).

Take the rescue crew back to where the Event Horizon went (after the evil corrupted him; all failed).

Dr. William Weir is the main human antagonist of the 1997 sci-fi/horror film Event Horizon. He is a scientist and the builder of the titular ship. Over the course of the film, Weir begins to succumb to the ships evil temptations before turning completely and wanting to send the rescue crew with him to Hell.

He was portrayed by Sam Neill, who also played Damien Thorn in The Omen, Charles Bromley in Daybreakers and Mr McGregor in the Peter Rabbit film.

Sometime in the mid-21st century, a ship called the Event Horizon was designed and built by Dr. William Weir. It was a ship that was capable of faster-than-light travel using an artificial black hole to open a portal from one part of the universe to another. On its maiden voyage, the ship was thought to be lost. But in reality, it used its faster than light engine to travel beyond the boundaries of our dimension to another dimension; one of pure chaos and evil. Some refers to it as Hell itself. The crew was killed on the ship, in very horrifying ways.

In the year 2047, it returned to our galaxy, now a self-aware, living, and malevolent ship. A crew was ordered to go to Event Horizon with Dr. Weir and find out what happened, find the crew, and bring the ship back to Earth. What happened instead was the ship used its telepathic abilities to use the crew's fears against them, killing them in the process. It used the form of Dr. Weir's dead wife to seduce him into assisting it.

He blew up the Lewis and Clark, killing Smith then gruesomely vivisects DJ much to Miller's horror. Miller became more horrified when Weir's eyes were gouged out. He activates the gravity drive, determined to send the new crew to hell. He was blown out of the window when he fired at Cooper.

After a fight with the rescue crew Captain, the Event Horizon was partially destroyed, sending the drive section of the ship back to the Hell dimension with Dr. Weir and the Captain, leaving only three survivors in the lifeboat part of the ship.

It’s unknown if Weir and Miller were killed when the explosives were detonated or if they survived and were instead sucked through the black hole into the hell dimension.

Prior to the event of the movie, Dr. William Weir was an intelligent and brilliant physician even if he was a bit too technical toward those who are non familiar with physic. He had a lovely wife but she committed suicide under mysterious circumstances and it is shown in his dreams he feels guilty of it, giving him a tragic side. Unfortunately, the Event Horizon took advantage of it and tormented by the hallucinations, Weir crossed the Event Horizon by blocking the way to the soldiers who wanted to exit the ship.

After his revival, Dr. Weir acts completely under Event Horizon's psychic control, becoming a sadistic monster willing to send all of his crew into hell.

Weir onboard the Lewis and Clark rescue vessel

Weir with Captain Miller and his crew

Weir about to be sucked out of the spacecraft into space

A disfigured Weir returns, claiming the Event Horizon will not let him leave

Weir is missing when Miller's explosives detonate onboard the Event Horizon 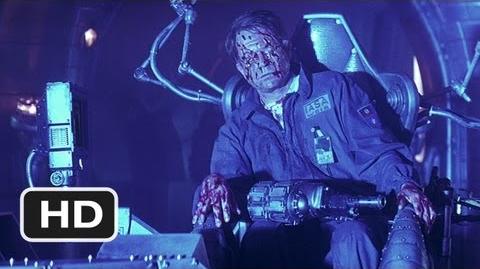 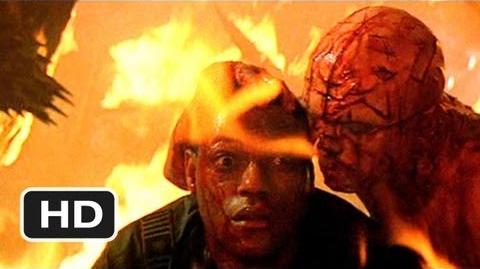 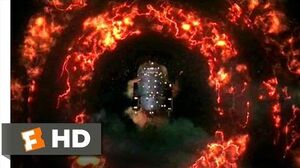