Doctor Zaius
Minister of Science
Chief Defender of the Faith

Planet of the Apes

He is an intelligent, evolved orangutan who serves as one of the political leaders of the ape-dominated world, both in religion and science. Zaius serves a dual role in Ape society, as Minister of Science in charge of advancing ape knowledge, and also as the designated Chief Defender of the Faith ape religion. He believes all humans are an abomination and kept the truth about the origins of their society a secret.

He was portrayed by the late Maurice Evans in the films and currently by Dana Gould in real-life.

In the original films, Dr. Zaius is a powerful politician and one of the three apes in charge of society. Dr. Zaius is fanatically devoted to his religion and its prophet, the Lawgiver. Ape society is a caste system that is divided into four classes. Orangutans are the politicians and priests, chimpanzees are the doctors and scientists, gorillas are the laborers and soldiers and the humans are slaves used only for experiments. Specifically, Dr. Zaius is the Chief Defender of the Faith and the Minister of Science and believes that science and religion can coexist. This angers the chimpanzee Dr. Zira, who knows that the sacred scrolls are incorrect and contradict new scientific discoveries. Zaius is aware of this and even covers up evidence that could prove him wrong, but he believes that society is fine the way it is, and any further discoveries could risk upsetting things and resulting in the apes suffering the same fate as the humans, or ultimately resulting in the humans becoming dominant once again.

Zaius was one of the few apes (if not the only ape) who knew the true origins of simian culture, as well as that of humans. While the Sacred Scrolls established the edict that apes evolved from man, Zaius knew that apes were once in fact subservient to man. Despite knowing that his religion was flawed at best or false at worst, Zaius still believed it and made sure to keep his knowledge of the past a secret. However, the potential arrival of an intelligent human frightened him deeply, with Zaius stating that he knew one would ultimately arrive, and dreaded it. This ultimately happened, with the arrival of a human astronaut named George Taylor. Taylor cannot speak due to a throat injury, but when he ultimately reveals his intelligence to Dr. Zira, Zaius is concerned. A hearing to determine Taylor's origins is convened. Taylor mentions his two comrades, learning that Dodge was taxidermied and Landon was lobotomized and rendered catatonic. Believing Taylor is from a human tribe beyond their borders, Zaius privately threatens to castrate and lobotomize Taylor for refusing to reveal his origins.

With help from Zira's nephew Lucius and her husband Cornelius, Zira frees Taylor and takes him to the Forbidden Zone, a taboo region outside Ape City where Taylor's ship crashed. While Cornelius and Zira are intent to gather proof of an earlier non-simian civilization so they can be cleared of heresy, Taylor is focused on proving he comes from a different planet. Arriving at the cave, Cornelius is intercepted by Zaius and his soldiers. Taylor holds them off by threatening to shoot Zaius, who agrees to enter the cave to disprove their theories. Inside, Cornelius displays remnants of a technologically advanced human society pre-dating simian history. Taylor identifies artifacts such as dentures, eyeglasses, a heart valve, and to the apes' astonishment, a child's talking doll. After Zaius is ambushed and held hostage by Taylor, Zaius agreed to let him go if he never returned to Ape City. Zaius claimed that the planet was a "paradise" until humanity "made a desert of it eons ago". Taylor explained that he was going to find the truth about the history of humans on the planet, and Zaius warned him that he may not like what he finds. This proves to be true, as Taylor finds the ruins of the statue of liberty and realizes that this foreign planet was Earth all along. Dr. Zaius then had Cornelius's archaeological findings destroyed, and ordered Cornelius to stand trial for heresy charges.

Beneath the Planet of the Apes

As ape society is on the verge of famine, the supreme commander of the ape military, a gorilla named General Ursus, resolves to invade the forbidden zone and exterminate the remaining humans so they can have more farmland. Zaius does not agree with the plan, as the Sacred Scrolls say the Forbidden Zone is dangerous. However, faced with starvation, Zaius relents and accompanies Ursus and his army into the Forbidden Zone. In the forbidden zone, they see illusions created by mutant humans to try and scare away the apes. However, Dr. Zaius's faith is so great, he is the only ape to go headfirst into the illusion, proving it to be blasphemous.

The apes invade the subterranean mutant city, making their way to the cathedral. Taylor is in the mutant civilization at this point, and sees that the bomb the mutants worship has the Greek letters Alpha and Omega on its casing. Taylor recognizes it as a "doomsday bomb" capable of destroying the entire planet. Many of the mutants are either captured, killed, or found to have committed suicide. Taylor attempts to stop Ursus from accidentally setting off the weapon, but Taylor is shot as his pleas to Zaius fall on deaf ears. The mortally wounded Taylor curses Zaius as he collapses bringing his hand down on the activation switch, triggering the bomb, which kills everyone and destroys planet Earth. Zaius's hatred towards the human race ultimately led to his demise and planet Earth's destruction.

Doctor Zaius reappeared yet again in the animated series, with no obvious connection to any other version of Zaius.

He served as an authoritative government official who held influence within the Ape Senate and had authority over both Cornelius and Zira, and their scientific enterprises, as well as General Urko and his military. He wanted Bill Hudson captured but also distrusted Urko's ambitions.

In Tim Burton's 2001 remake, Zaius was the aging father of ape military commander, General Thade. An important leader of Derkein, possibly a senator, he was also a direct descendant of Semos, founder of the ape society and regarded as god of the apes. Of all the apes in the community, he was the only one who knew the truth concerning the Forbidden Area known as Calima. Zaius despised humans and blamed them for the downfall of society. As a reminder of humanity’s destructive nature, he kept one of their weapons – a handgun – inside an ancestral urn held within his household. He knew the trouble that Leo's arrival could bring. On his deathbed, Zaius consulted with Thade and revealed some of the hidden truths in regard to humanity having once been dominant on the planet. And as further proof, he asked his son to break the ancient urn, revealing the human weapon he had kept all those years and claiming it as proof of humanity's potential to overtake the apes with their capacity to innovate. Condemning all human beings "to Hell", Zaius passed away, leaving the handgun to Thade.

Zaius was the highest-ranking member of the High Council of Central City in the year 3085. Obviously based on the character from the movies, he filled the same function as his namesake. In fact, he was quite possibly an ancestor of Dr. Zaius in the movies.

He served as a government official, with authority over all the humans in his district. He knew of the potential of humans and would stop at nothing to maintain the status quo. The young chimpanzee Galen became his new assistant, but became a fugitive with two human astronauts, fleeing from Zaius and his enforcer, General Urko, who wished to question the astronauts in order to prevent more following them.

Professor Zaius' story was told in the Apes Game For PC. His first appearance in the game can be viewed here. Upon escaping from his cell in the Ape laboratories, Ulysses crawled through the air ducts to where he saw Zaius talking to Doctor Zira. He was against the special treatment favored by Zira towards Ulysses, who she saw as a very unusual human. Reminding her of his authority, Zaius told her that Ulysses will be transferred to the mandrill militia. Ulysses encountered Zaius again when he entered the Ape High Council chamber, where Zaius was chairing the Council. On reading the evidence Ulysses had gathered about Ursus' secret plot, Zaius ordered the arrest of Ursus and, despite the protests of the other Council members, offered Ulysses the chance to go free if he never returned to the Ape City. Ulysses agreed and Zaius then explained that his apparent gratitude was in truth a calculated plan to portray Ulysses as a selfish coward rather than the heroic leader of the human resistance he had become. Just as Ulysses and Nova made their escape however, Mathias was already assembling a huge human army to attack Ape City. 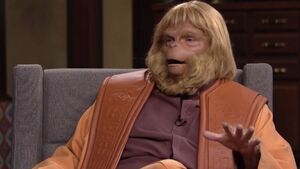 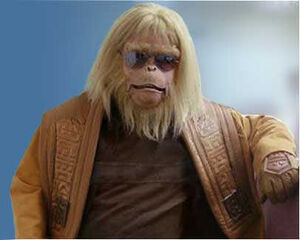 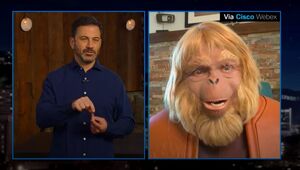 Retrieved from "https://villains.fandom.com/wiki/Dr._Zaius?oldid=4090276"
Community content is available under CC-BY-SA unless otherwise noted.