Shooting balls out of a cannon

Being happy
Eating and wasting ice cream
Getting hugs from Rat

Make everyone around him miserable.

Kill Courage and Muriel (both formerly).

Dr. Zalost is the main antagonist of the episode "The Tower of Dr. Zalost", the Season 2 finale of the Cartoon Network show Courage the Cowardly Dog.

Dr. Zalost is a depressed scientist whose goal in life was to make everyone as miserable as he was. In order for this to happen, he created bombs that, when a person is hit, they would instantly become unhappy. When he demanded $33,333,333,333 (33 and ⅓ billion US dollars) to fund his Unhappy Cannonball project, however, his proposal for his plan was laughed at.

When he started firing his bombs at the citizens of the American town of Nowhere, he was given the money in order for him to stop his attack upon Nowhere. Still not satisfied, he continued his attack on the citizens. This even effected Muriel Bagge. Zalost had an assistant, an anthropomorphic rat named Rat. Their relationship was rather complicated, and it's shown that Zalost was more abusive in their relationship. For example, he was angry with him for not giving him a proper hug.

When Courage discovered that the antidote to the bombs was Muriel's Happy Plums, he snuck into Zalost's tower, with the help from Eustace who disguised himself as a pizza deliveryman. After Courage entered the tower, Rat and Courage fought briefly, when one of the Unhappy Cannonballs hit Rat, mutating him into a monstrous version that bears a striking resemblance to Warooey. At the end, Courage used one of the Happy Plums to turn Rat into a crying baby. Courage managed to get to the top, but not before being hogtied by Dr. Zalost and having a cannon pointing at Courage. Zalost then informs Courage that if he can win a game of Hangman before the cannon goes off, Zalost will cure Muriel. After several wrong guesses, and a fiasco of buying vowels, Courage guesses BOOM correctly, but without guessing the constonants, which upsets Zalost, who accuses Courage of cheating. After Zalost grabs Courage and threatens to end Courage's life, Courage threw a cup of Happy Plums on Zalost's head, which is then added into the bomb mix, and it created new bombs that cured everyone. The result of the new Happy Cannonballs being created destroyed Zalost's Tower, however, with Zalost moaning and escaping.

After Courage took the baby Rat and a Happy Cannonball back home, Dr. Zalost, now charred, withered and angry, calls Courage a stupid dog, which Eustace calls all the time. Courage uses his cannonball to return Muriel to normal while Dr. Zalost uses the last Unhappy Cannonball at Eustace, petrifying him. After some zombie-esque moans and kicking the baby Rat out of his way, Zalost made it to the kitchen and saw some of the Happy Plums on the table. He ate some, coughed, and was converted into a more happier scientist, his eyes are normal white and his skin is normal colored, and he then immediately reconciled with Rat by hugging him. Because Dr. Zalost is Serbian due to his name, coincidentally or not, he refers to plums as his favorite meal - Serbia is the world's second largest producer of plums. 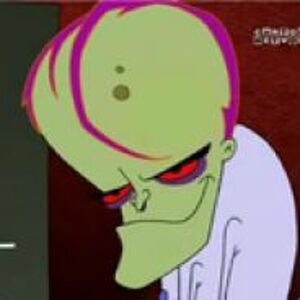 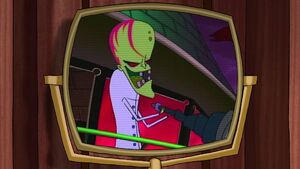 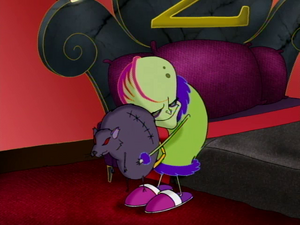 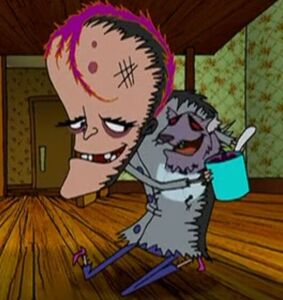 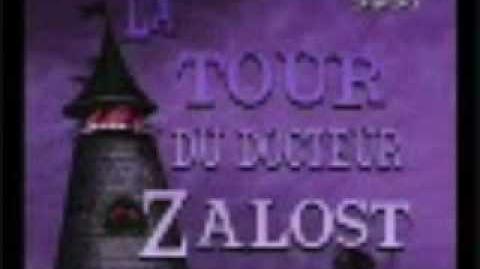