NOTE: This article is about the incarnation of Zander Rice from the X-Men film series. The mainstream version can be found here: Dr. Zander Rice (Marvel).

High-ranking member of Essex Corp.
Employer of The Reavers
Head of Project: Transigen

Enslaving mutants and exploiting their abilities.

Uphold and continue his father's legacy and avenge his father's death by killing Logan via X-24.
Suppress and gain control of the mutant gene and to use it in order to create Laura and X-24 and to control over them and the other children (all succeeded).
Recapture X-23/Laura and the other clones in order to exploit their abilities into financial profits and thus to enslave all mutants (failed).

He is the surgical head of Essex Corp, the leader and employer of The Reavers, as well as the mastermind behind Project: Transigen. He is based on the character from the Marvel Comics.

He was portrayed by Richard E. Grant, who also played Withnail in Withnail & I, Barkis Bittern in Corpse Bride, the Great Intelligence in Doctor Who, Vic Van Wrinkle in Horrid Henry: The Movie, The Man With a Beard But No Hair in A Series of Unfortunate Events and General Pryde in Star Wars: Episode IX - The Rise of Skywalker.

A sophisticated genius would be the best way to describe Dr. Zander Rice. He talks in a smooth, collected way almost all the time in order to make the person he is talking to believe that he is affable.

While he does seem genuinely nice at times, he is also often arrogant, underestimating Wolverine's powers when Donald Pierce was torturing Caliban.

Rice is a cruel monster that tortures and enslaves mutant kids for monetary gain, making their lives absolute nightmares in the process. Not only that, but Rice is also delusional, and sees what he does as less brutal than it truly is.

A younger Dr. Zander Rice is seen with glasses, entering The Alkali Facility and creating X-24.

His father, Dale Rice, originally founded Essex Corp. After he was killed by the Wolverine, his son, Zander continued to work in the company. He signed a project, named "Project: Transigen", whose purpose was to capture and control mutantkind.

He later hired on the ex-military mercenaries, the Reavers, led by Donald Pierce, as a private security force for his company.

Rice bred mutant children by impregnating Mexican women with DNA taken from other mutants. Through this method, various mutants were born into the X-23 program, including the Wolverine's biological daughter, Laura Kinney. However, Laura had betrayed him and tried to massacre the facility. Gabriela, a nurse working for Transigen, also helped many mutant kids, including Laura, escape. A while after that, he decided to recapture Laura and program her to be the new Weapon X.

Dr. Zander Rice sends Pierce and his men to recapture Laura, and kill whoever stands in his way, mostly the Wolverine. After the many failed attempts of capturing them, Rice decides to "bring new tools to bear". Using mutant tracker Caliban, Rice and the Reavers track Logan, Xavier and Laura to Will Munson's house. Dr. Rice sends X-24 to kill Charles Xavier and recover Laura.

Zander's attack has caused the deaths of Will Munson and his family. Rice tried to get Caliban to control the mutants, however, Caliban took control of X-24 and caused him to kill a few of Rice's soldiers. Caliban then threw two grenades, and bombed Rice's van. Rice later returned to his base to plan a strategy while the Reavers took care of X-24 and Donald Pierce. He determines that X-24 has fulfilled the project's purpose and decides to kill all of the remaining mutant children. Rice then receives reports from Pierce about the whereabouts of the mutant kids.

He and the Reavers later go to stop the mutants from crossing the border into Canada. Meanwhile, Dr. Rice and the Reavers chase after the mutant kids, almost managing to capture them all, until Logan enters the scene and starts tearing them down.

Dr. Zander Rice reveals to Logan his plans to gain control of the mutants, and states that he does so in order continue the legacy of his father, and become rich. While monologuing his intentions to use the mutants and exploit their powers, an angered Logan kills RIce with a shot to the throat while the mutant kids kill Pierce with their powers.

Unfortunately, Rice's death proved to be Logan's downfall as it drove an angry X-24 to kill Logan by impaling him on a large tree branch, though X-24 would later be shot to death by Laura in revenge for Logan's death. 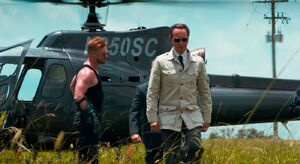 Dr. Rice arrives to check up the situation

Zander in his caravan 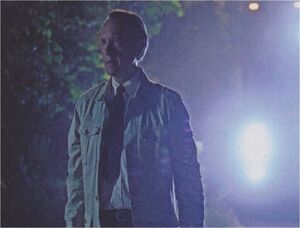 Dr. Rice in the night, ordering X-24 to stop attacking the gang members. 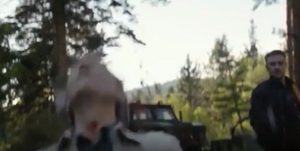 X-24 watching Rice's corpse, moments before having his vicious breakdown.