Leader of the Zombies

Performing in the field of mechanical engineering.

Kill the Player and eat his brains.
Ruling the world (PvZ Garden Warfare 2).

Dr. Edgar George Zomboss is the main antagonist of the Plants vs. Zombies video game series. He is an undead scientist who controls an army of zombies.

He is a zombie that is very short. He has a big brain on his head. He wears his white shirt, and black pants (while white pants in PVZ GW2) that can tell he is a scientist. Unlike other zombies, he (possibly) wear shoes.

Dr. Zomboss is an intelligent and evil being, able to construct several powerful machines and to deploy a mass array of zombies in order to thwart Crazy Dave, the players, and their botanical arsenal. He is destructive and ruthless, as seen in Plants vs. Zombies where he will send a giant fireball or an iceball against anything in his way. This was heightened in Plants vs. Zombies 2, in which his creations destroy his own minions; however, he does not seem to feel any regret for these actions.

Dr. Zomboss also shows no concern or remorse toward his enemies per Plants vs. Zombies 2. He sends down many of his henchmen even on lanes where absences of lawn mowers are imminent. He is also arrogant, mocking Crazy Dave most of the time and using profane or vulgar words whenever conversing with him.

Dr. Zomboss is also a smart strategist. He holds a lot of backup plans to fill in should one of his machines malfunction and should the Gargantuars that he stationed to protect the world keys fall.

He has also shown to be deceitful per Plants vs. Zombies 2, able to plague Penny's thoughts when Dr. Zomboss remarked that Crazy Dave constructed Penny from decommissioned parts of Dr. Zomboss' past creation in Pirate Seas - Day 25. Some time later on Wild West - Day 25, he deceived the player and Crazy Dave, by saying that the zombies are just helping out as normal residences of the west. Furthermore, he also remarked that the zombie apocalypse is just a mere illusion. He also used deception on Far Future - Day 25 to persuade the player that they are being misled by Crazy Dave, only to be followed by a hypnosis. This only ended on Dark Ages - Night 20 when he said that Plant Food is made from zombies. Some time after the battle, he was foiled out by Penny, revealing that there are no zombies or any other evil substances circulating within Plant Food's nutrition facts.

Overall, his main goal is to persuade Crazy Dave to quit his journey in search for taco, to submit to his will, and to let his and the player's brains be consumed.

However, he is also seen to care about the greater good, as seen by the boss battles of Modern Day. In these, he remarked that time was being distorted and begged the team to stop searching for the taco. He used a Taco with a Waffle in it as a bargaining chip for Crazy Dave.

It is worth noting, though, that despite Zomboss's appeared concern for existence, he still uses portals in battles after the aforementioned events, which would logically distort time further. Some believe that Zomboss could not care less and was lying as yet another attempt to thwart Crazy Dave.

He appears on the last level of the roof stage, level 5-10, serving as the game's main final boss along with his Zombot.

Before the fight, the player receives a letter from Zomboss, ordering the player to surrender their brain or they will be taken by force. Crazy Dave begins talking about Zomboss's weakness, continuously tripping up in his own speech. When he ultimately remembers Zomboss's weakness, he is abducted by a Bungee Zombie before he is able to tell the player. After that, the colossal zombie-esque robot climbs up to the roof and the battle begins.

The player must keep planting catapults, Jalapeños and Ice Shrooms to defeat the swarms of zombies, van throws, giant snowballs and magma balls, that the machine drops out.

Once finally won against and the mech starts to deteriorate and dismember, a half-injured Zomboss appears on the damaged head that falls to the roof, to signify the player's victory with a white flag.

Plants vs. Zombies 2: It's About Time

After his surrender in Plants vs. Zombies, he returns, probably reanimated from the dead. He appears as the final boss at the end of each world and briefly appears at the midway point of every world to introduce that world's Gargantuar, the secondary boss. He has a different Zombot for every world.

The first four are similar, being able to leap around the board, trample plants, and fire missiles at key points in the player's defenses, also spawning zombies onto the board. The other Zombots have different effects, such as the Sharkatronic Sub using its vacuum mouth to remove plants on the water. Before he strikes he comes up with a way to try to turn the player against Dave and side with the zombies.

In Ancient Egypt, he tries to convince the player that Dave is a cannibal, later in Pirate Seas, he sends Penny into an existential crisis by telling her that she is made of parts of old zombots, then in Wild West, He tells the player that zombies are normal people and Dave is a delusional murderer, sometime later in Far Future, he brainwashes Dave, and so on.

However, after he is defeated, Dave and Penny counter his verbal attacks, and he warps out to an unknown location, leaving behind a world trophy. It was at first believed that he warped to the Far Future, but after he was defeated there, he still warped out in worlds after. After his defeat in Jurassic Marsh, he snaps and begins his final attack: Project Paradox. He travels to Modern Day, moments before the time travel journey began, to stop Crazy Dave from eating the taco and having a desire to travel back in time, thus meddling with Zomboss's plans. He warps time and summons zombies from all history (and future) to converge on the player.

Dr. Zomboss plays as the leader of the Zombies Vanquish team, his victory depends on the players.

Dr. Zomboss has successfully taken over Suburbia, and just like the first Garden Warfare, his victory depends on the players.

Dr. Zomboss uses his Hero-Tron 3000 to turn zombies into heroes, but the malfunction of the machine can also turn plants into heroes, and he has to unite all the Zombies Heroes to stop them. 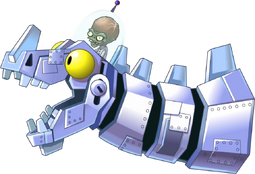 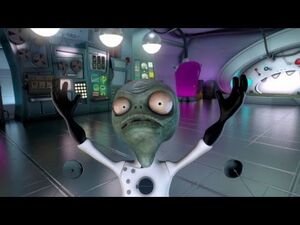 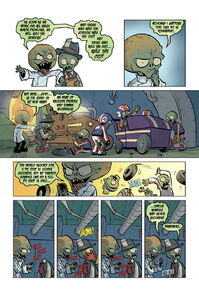 Dr Zomboss in the comics.
Add a photo to this gallery

Retrieved from "https://villains.fandom.com/wiki/Dr._Zomboss?oldid=3045096"
Community content is available under CC-BY-SA unless otherwise noted.