Dracula
King of the Night
Lord of Darkness

Supreme monarch of Evil and Darkness

Enjoying the recreational areas of Castlevania.

Plunge the world into everlasting darkness.

Get revenge against humanity (both ongoing).

Count Vlad Tepes Dracula, formerly Mathias Cronqvist, is the primary villain of the Castlevania video-game franchise. He is a former Holy Knight who renounced God after the Death of his wife and became the King of the Night, the personification of Chaos. He is the father of Alucard. He is based on Bram Stoker's character, in turn based on the infamous Vlad III Dracula of Wallachia. His tragic downfall was inspired by Francis Ford Coppola's 1992 film Bram Stoker's Dracula.

Dracula looks like a typical Vampire Lord, with chalk-white skin and bright red eyes, clad in luxurious medieval attire and a long, high-collared black and red cape. However, depictions vary from game to game.

In the early games, he resembles Bela Lugosi's portrayal in the famous 1931 Dracula film; clad in the "classical" tuxedo, clean-shaven, with short, sleeked black hair in a widow's peak.

However, Symphony of the Night set his aspect as an old aristocrat twice as tall as an adult, with long grey hair, a thin moustache and a goatee, wearing an ornate coat, a sash belt, and an ascot tie. He sometimes appears in ornate robes, or younger-looking.

Dracula almost always becomes a gigantic demon, most often resembling a humanoid monster with horns and red bat-like wings. His most common transformation resembles a dark blue (or greenish) draconic gargoyle, with wings attached to his arms, which was also seen looking like a black, bat-like demon. But he has also appeared as a Mesopotamian-looking idol, an insectoid dragon, or an immense purple devil.

In some cases, he has turned into a giant bat, an immense vampiric face, a gigantic and devilish goat head, or turned his cape into a repellent mash of demonic figures with skull-like heads and gigantic arms and wings.

Dracula is scornful, cruel and ruthless, yet poised and regal, having perfect manners and imposing presence. He is very polite, erudite and refined, greeting foes and discussing their motives, though he often laces it with sarcasm and dark humour at their expense. In some games however, he only displays scathing spite and arrogant taunts.

He is very cordial to his vassals and generous to those who resurrect him, valuing their loyalty and granting their wishes if they pledge obedience. Yet, he is harsh, unforgiving to traitors, manipulative of his followers, and fully willing to kill anyone he dislikes, to sacrifice servants, and to abduct and vampirize women who stroke his fancy at the drop of a hat.

Finally, he is highly intelligent and cunning: acting through unwitting pawns and proxies from the shadows, devising smoke-screens or false tracks to catch the heroes off-guard, or scheming to plague them even if they win.

Losing his first wife made Dracula loathe God, viewing him as a cruel and ungrateful tyrant. He vowed to curse him forever and deprive him of the world. Losing his second wife made him loathe humanity, hypocritically calling them petty, greedy and dishonest, while he himself is much worse.

He states that everyone, heroes included, bears darkness in their hearts and should stop denying their own selfish desires. He states that there is no freedom, people being willing slaves to their religions which he likens to his harvest of souls. Finally, he states that humanity's evil is to blame for his returns, and that spreading darkness is just is granting their wish.

Dracula often taunts his foes, telling them that they struggle in vain and that he will always return despite their best effort. He is quite rightfully confident in his might, but he keeps underestimating the Belmont and Belnades clan when they always prevail. However, his softer side resurfaces when facing his son or remembering his wives. Despite their feud, he bears no ill will towards Alucard, and he has once expressed regret over his evil ways after being reminded of Lisa's last wish. Later games hint that even he is tired of the endless cycle and longs for respite.

Dracula is frighteningly powerful. It has been speculated, but not confirmed, that the longer he is around, the younger and mightier he becomes.

When he unleashes his full might, he becomes a huge demon and his power skyrockets. He wields the power of Dominance (absorbing the souls and powers of his victims), Mimicry (copying peoples' power), and Hellfire (conjuring and controlling fire from Hell itself).

Dracula is unmatched with the vampiric powers. Not only can he turn to a wolf, a bat or a mist cloud, but a gigantic swarm of bats or a poison cloud, and change his cape into bat-like wings or worse. He has incredible strength, drains blood at contact, compel hordes of beasts, and changes the weather.

He masters all of Alchemy and Dark Magic. He can sense people's presence and connections to others; project himself where he is not present; create and transform places, such as his Haunted Castle he totally controls, once creating four magical castles out of nowhere. He can also cause all sorts of plagues and disasters, including rains of blood; cast an everlasting night on his domain; drag his foes into hellish planes; possess things and people; and curse entire countries, to the point of withering the land and corrupting the population even after his death.

Dracula has complete control over Evil and Hell. He draws power from the Chaotic Realm in which human malice gathers. All monsters and malevolent beings pledge loyalty to him; most regarding him as a "saviour" able to cleanse the world anew.

His mere presence is enough to drive normal people mad and to corrupt his surroundings. He is also able to increase the evil in people's hearts, and to surround himself with evil energy or pure Darkness.

Not only Dracula "lives" forever, but he can only be harmed when struck in the head or the chest with specific weapons. Even worse, he always resurrects a hundred years after being destroyed, when enough human malice gathers. Not counting those who resurrect him through Dark Rituals. 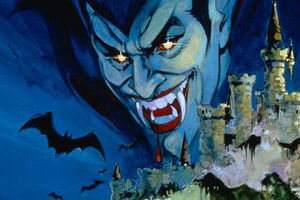 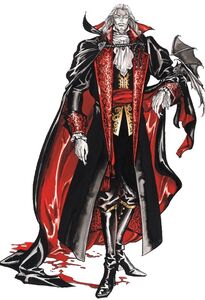 Dracula in Castlevania: Symphony of the Night. 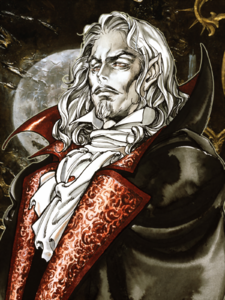 Dracula's portrait as seen in Symphony of the Night. 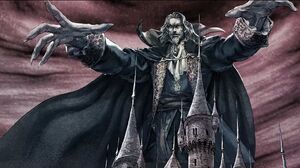 Dracula overlooking the Castlevania in Grimoire of Souls. 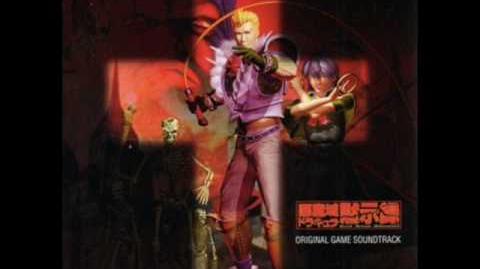