Leader of the gang of Monsters

Keep his Monsters in check.

Use the Amulet to undo the balance between good and evil.
Plunge the world into darkness.
Rule the new world of Monsters.

Dracula is the main antagonist of the 1987 Cult Classic film Monster Squad.

He was portrayed by Duncan Regehr.

The exact origin of this incarnation of Dracula, and whether or not he has any connection with Vlad Teppes is left unrevealed, but he is portrayed as being a powerful figure in Transylvania as far back as 1887. During that year, Abraham Van Helsing attempted to siege Dracula's castle and imprison him with an amulet of concentrated good. As the narration of the movie states "they blew it." However, some apprentices of van Helsing had not fallen victim to Dracula, and they emigrated to the United States, where they hid the amulet outside of Dracula's immediate reach, and began preparations for his return.

100 years later, Dracula seeks the amulet once more, and has tracked it to its current location. To assist him in his quest, he gathers together Frankenstein's Monster, The Gill-man, The Wolfman, and The Mummy to assist him, as well as kidnapping three young women and making them his brides. Dracula lives in a house which is actually atop the lair that contains the amulet. However, van Helsing's followers had booby-trapped the basement with crucifixed, holy relics and other objects which are anathema to evildoers, which prevents Dracula or his underlings from simply walking in and claiming it.

Dracula, however, was opposed by a small group of horror-movie loving children (as well as a few police officers, an elderly holocaust survivor, and a rebellious Frankenstein's monster). And was, after a decent fight, thrown onto a sharp stake by Frankenstein's monster, however he survived this due to his dark powers, and was about to continue the fight when the German Guy and Phoebe summoned a portal to Purgatory. Out came none other than Dracula's arch-nemesis, Van Helsing, who dragged Dracula back into Purgatory to presumably finish Dracula for good.

Like most versions of Dracula, this character has shown multiple supernatural powers. He was shown as flying (even in human form) freely turning from a human to a bat and back again, turning himself (and his car) intangible, mild control over the weather, starting and snuffing out small fires with his mind, firing bolts of energy from his hands, casually resisting the bullets and nightsticks of police officers while easily breaking their necks in the final battle, as well as (offscreen) turning 3 young women into vampires.

In addition to his supernatural powers, this version of Dracula also seems perfectly content with using modern technology when it benefits him. He's shown driving a limousine, harnessing lightning with a lightning rod in his cane, using dynamite on many occasions, and using modern medicine to drug the Wolfman (when he was in human form).

Personality wise, Dracula has an aristocratic, erudite personality, which has often been attributed to depictions of the villain. Dracula appears to have accepted the stalemate from his 19th Century attack from Abraham van Helsing, and views his 20th Century fight as another rematch in evil vs. good, as evidenced by his overlooking an American town and remarking to himself "Let it begin". He only loses his calm demeanor when his opponents seem to be getting the better of the fight, resorting to vulgarity and willingness to use violence on small children, such as when he called Phoebe a "bitch" and threatened asphyxiation on her if the Monster Squad did not surrender the amulet.

As a commander, Dracula often has his monsters carry out the more physical aspects of dealing with opponents, but he himself can fight formidably when no other monsters are on hand. Dracula also attempted to maintain an iron grip over his own "monster squad", which ultimately led to his downfall. His desire to keep the Wolfman under his total control had caused him to fail to deal with the defection of Frankenstein's monster.

Regehr's interpretation of Dracula is considered one of the best interpretations of the character. Out of all the versions, this particular version was voted #30 on Wizard Magazine's List of the "Top 100 Greatest Villains". 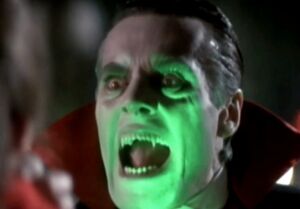 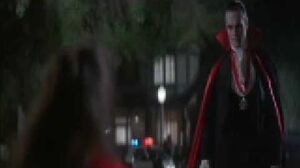