Mastery of darkness and Hellfire
Influence over vampires and monsters
Immortality

Resting in his study.
Reading.

Count Vlad Dracula Tepes is the main antagonist of the Netflix and Powerhouse Animation anime adaptation of Castlevania, based off of the character of the same name from the video games. The story follows the games' background, referencing the feud between Dracula and Leon Belmont, but hints that Dracula might have been the infamous Prince Vlad III of Wallachia as well. He is Trevor Belmont's arch-nemesis.

He was voiced by Graham McTavish, who also portrayed Zoran Lazarević in Uncharted: Among Thieves, both Father Kinley and Dromos in Lucifer, the Saint of Killers in Preacher, Joseph Bertrand III in inFamous 2 and Loki Laufeyson in The Avengers: Earth's Mightiest Heroes.

Dracula's personality and mannerism are very close to that of his game counterparts, but he is not the incarnation of Chaos, being "merely" an extremely powerful Vampire, and an expert scholar on all scientific, esoteric and magic fields, much like his original novel counterpart.

He lives in a castle which he can teleport everywhere, filled with all sort of technology replicated from what he saw when scrying into the future; a nod to the many anachronisms and to the Castlevania's ever-changing location in the games.

He is cruel, unforgiving and prideful, being willing to slaughter people for simple slights, though he would spare women and children, but he is strongly solitary and misanthropic instead of being pure evil, forging genuine bonds with his wife, son and protégés. Alas, tragedy would drive him off the deep end.

His love for his wife is strongly emphasized. Instead of being the catalyst for becoming the King of the Night, it breaks him to the point he loses interest in everything, with his plans of genocide being more blindly lashing out in grief than a real goal. He no longer bothers to feed, to strategize or to rule his council, not even caring to what happens to them and to him.

The story starts in 1455 in Romania. A young woman named Lisa Fahrenheit, training in science and medicine, comes to his castle surrounded by hundreds of impaled skeletons to ask for his tutelage, while resisting his intimidation attempts and offering to teach him to reconcile with the world in exchange.

Impressed by her resolve, Dracula gives her access to his enormous resources. As time goes by, they fall in love, marry and have a son, Alucard. She even inspires Dracula to travel as a human, to learn more about the world.

Alas, many years later, while Dracula was traveling away, Lisa was captured by a fanatical, corrupt, power-hungry and retrograde bishop and burned at the stake under the accusation of witchcraft. When Dracula comes back to their house and find it in ruins, he learns from an old neighbor lady that it is already too late. Maddened with grief, Dracula laments that he could have been on time to save her had he used magic. He warns the neighbor to flee the country with her family as a final kindness, to escape his revenge.

He disappears in a pillar of fire and manifests in the pyre flames as a giant, fiery head, cursing the townspeople for burning an innocent physician. Rebuked by the Bishop who dismisses him as a myth, he gives the Wallachian population one year to put their business in order or flee, before he wipes them from the map.

As an enraged Dracula prepares to raise an army of monsters from Hell itself by next year, 19-year-old Alucard attempts to talk him out of it, as innocents like Lisa would suffer. Dracula retorts that there are no innocents for they would have stood for her, attacking him in blind rage and grievously wounding him with a claw swipe.

One year later, during a ceremony, the Archbishop of Targoviste brags foolishly that the promises of doom by "the Devil" were but lies, blood starts raining over the city and the stained-glass windows of the cathedral shatter, with the shards impaling the Archbishop and his attendants. The cathedral suddenly sets itself ablaze and Dracula manifests in the fire, cursing the crowd for celebrating instead of heeding his warning.

All windows in town bang open, letting out hordes of winged demons who horribly slaughtering everyone around. As the Castlevania rises over the city in a blazing inferno, Dracula manifests as thousands of ravens, ordering his forces to destroy the entire country, town by town.

However, a man named Trevor Belmont, armed with the Holy Vampire Killer whip sets out to defeat the vampire, engaging both the monsters and the corrupt agents of the Bishop who killed Lisa.

Trevor protects a group of scholars called the Speakers from the Bishop, who excommunicated the Belmont Clan and burned their mansion, and is now using the chaos to take control of the country, scapegoating anyone opposing him for the monsters' invasion. Trevor saves the Chief Speaker's granddaughter, the mage Sypha Belnades who was turned into stone by a Cyclops.

Later, as the Bishop is killed by a powerful demon who gleefully reveals that his actions disgusts God so much that He no longer protects him, before ironically thanking him for enabling their rise on Earth. Trevor reveals the Bishop's corruption and lies, and helped by a pure-hearted priest and the Speakers, organizes the population of the city of Gresit to successfully fight back against Dracula's hordes.

Then, Trevor and Sypha venture in the crypt and meet 20-year-old Alucard, who just recovered. Together, they form an alliance to stop his father and save Wallachia before it is too late.

Dracula spends most of his time watching the fire in the hearth of his study, wasting away without drinking blood. He assembles his generals in the Castlevania, gathering many powerful Vampire Nobles and their armies, along with two human Devil Forgemasters, Hector and Isaac, much to the vampires' outrage. He reasons that contrary to them who only obey him to drink blood from humans en masse, they renounced their kind out of loyalty to his cause, having experienced first-hand how cruel humanity can be.

Dracula later teleports the Castlevania away from the ruins of Targoviste. Discord reigns among his council, when Carmilla, the last Vampire Noble recruited appears, announcing that his legions of demons were defeated in Gresit. She dares asking why Dracula did not make his wife a vampire. Dracula talks to her in private and orders her to work with Hector and Isaac. They later learn that Trevor, Sypha and Alucard teamed up.

The Viking Vampire Godbrand confronts Dracula, stating that killing humans would doom vampires, but Dracula cowers him with size alone, making clear that he does not hold vampires in higher esteem than humans, regarding them as parasites. Dracula knows that his vassals are turning against him, with only Isaac being fully loyal, but he could not care any less He talks with Isaac, telling him that he is the only one he can consider a friend.

After Isaac kills Godbrand for insubordination, Dracula ponders that killing humans only brings him indifference, contrary to the past times, during which he methodically slaughtered forty merchants for merely disrespecting him, burning the city of Kronstadt and impaling them, sparing only women and children, making leather from his victim's skins as book covers.

He teleports the Castlevania into the city of Braila, which his forces start slaughtering. He enables his council to do as they please so long as they leave no survivor. Carmilla takes profit of this to take control and defeats his armies of vampires with her own, attacking the Castlevania. Just as Dracula is about to enter the fray and deal with Carmilla's forces himself, Sypha uses a mirror and a spell she found in the Belmont Estate to teleport the Castlevania in the river, destroying most of the vampires, forcing Carmilla and Hector, now her slave, to barely escape.

Sypha teleports the Castlevania over the Belmont Estate and the trio storms the castle, slaughtering every vampire without troubles. Isaac is ready to fight to the death for his lord, but Dracula, touched by his devotion, teleports him to safety through a magic mirror.

Dracula greets his son, who states that the war is over, and reminds him that he was powerless to stop him before. Alucard retorts that this time he is not alone, and the three heroes engage the decisive battle against the King of the Night. Contrary to the games, Dracula never teleports and fights with his firsts and claws, overwhelming every foe no matter how powerful with his immense strength, speed and fighting skills.

Even greatly weakened by starvation, he effortlessly withstands everything they throw at him. He knocks Alucard down, throws Sypha away and catches Trevor, recognizing him as a Belmont and preparing to end his line, but his friends save him, enabling him to land a decisive blow with the upgraded Morningstar Whip.

As father and son continue to battle, wrecking the castle corridors on their wake, they crash into Alucard's childhood bedroom. It is only there that Dracula finally comes to his senses. Lamenting how he is destroying the only family he has left, in a voice laced with tears. Broken by regrets and shame, he does not lift a finger when Alucard rips a bedpost to stake him, and dies in an aborted embrace. Trevor then beheads him and Sypha incinerates him.

As everything is done, Alucard is heartbroken and plans for the Castlevania to become his tomb, but Trevor convinces him to guard the treasures and libraries of the castle and the Belmont Estate, and make him a symbol of peace instead of terror. Sypha and Trevor then leave, hinting a blossoming romance.

Alas, Carmilla is still around, and she uses Hector to rebuild an army of monsters, while Isaac is building his own army of undeads, meaning that the troubles are not fully over.

As Carmilla and her council are using Hector to rebuild an army of monsters and take over the continent, Isaac is building his own hordes to pursue Dracula's genocidal goal. Meanwhile, Trevor and Sypha investigate worshippers of Dracula in the town of Lindenfeld. It turns out that the Visitor, a highly powerful Night Demon forged by Isaac has corrupted the local Priory, who harness his power to open the Infinite Corridor, a gateway between dimensions.

The Priory's chief monk Sala plans to open an access to Hell, from which Dracula very nearly escapes back to the Earthly Plane with Lisa, but Sala is killed, and the mysterious and seemingly immortal Saint Germain helps Trevor and Sypha to destroy the Visitor and all the demons it summoned, before hijacking the Infinite Corridor to reach his long-lost lover. This ends Dracula’s threat, but for how long? 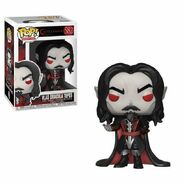 Retrieved from "https://villains.fandom.com/wiki/Dracula_(Netflix%27s_Castlevania)?oldid=4217651"
Community content is available under CC-BY-SA unless otherwise noted.