The Dragon is one of the four main antagonists (along with Mr. Hyde, Captain Ahab, and Long John Silver) of 20th Century Fox's 1994 live action animated fantasy film The Pagemaster. Although it is technically an animalistic being rather than having a personality of a truly malevolent monster, it posed a great threat to the group as they tried to escape the fantasy world. The dragon proceeds to endanger their lives several times in a climactic battle.

Its vocal sound effects were provided by Frank Welker, who also played Horror, Moby Dick, and the other creatures in this same film.

The dragon first appears as a picture in the center of the library, which melts and morphs into the dragon after Richard slips and gets knocked out, trapping him in the world of illustrations. The dragon later appears to be dormant. After Adventure continuously rambles in the dragon's mouth, the dragon wakes up, chasing Richard, Adventure, Fantasy, and Horror. Fantasy loses her wand by Horror accidentally knocking it out of her hand, and the dragon swallows it. After they are close to the Exit, the dragon attempts to burn Adventure, Fantasy, and Horror. This forces Richard into fighting the dragon by himself in order to save them.

While fighting the ferocious dragon, Richard gets caught by the dragon's tail, with the dragon swallowing him shortly after. However, after Richard opens the Jack and the Beanstalk book within its stomach, the dragon is then forced to regurgitate Richard due to the growing beanstalk. However, the dragon bites part of the beanstalk, making it fall down into nowhere and the dragon attempts to swallow Richard again. Luckily, Richard escapes and reaches the Exit, where the dragon pleasantly congratulates him. 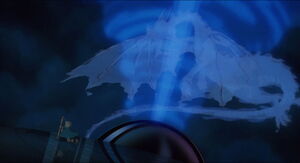 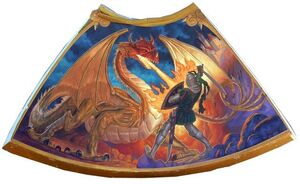 Retrieved from "https://villains.fandom.com/wiki/Dragon_(The_Pagemaster)?oldid=3496028"
Community content is available under CC-BY-SA unless otherwise noted.