Turning his daughter into a perfect weapon.
Killing Stargirl and Shining Knight.

Dr. Shiro Ito, also known as Dragon King, is a supporting antagonist of the first season of the DC-Show Stargirl.

Ito is a Japanese scientist who experimented on himself and transformed his body into a reptilian hybrid form. Under the name Dragon King he became a supervillain and an enemy to the Seven Soldiers of Victory before disappearing and presumably dying. However, Dragon King is still active and is working with the Injustice Society of America to further their goals. Dragon King's daughter Cindy is also involved in these plans and proves to be even more insane than her father.

He was portrayed by Nelson Lee.

Dragon King was born in 1901 in Imperial Japan and was a scientist to the Japanese military. He was responsible for the creation of several biological weapons and was arrested for war crimes before eventually being executed in 1947. However, Ito survived his execution and disappeared. He appeared in the United States where he now experimented on himself, turning himself into a human-reptile hybrid and giving himself superhuman abilities. He started amassing followers by breaking the minds of people and turning them into barely human drones without free will. He was responsible for several terrorist attacks and became an enemy to the hero group known as the Seven Soldiers of Victory. The group stopped him from destroying New York City with a living weapon but Ito, now going under the alias Dragon King, managed to escape.

Dragon King married and he and his wife had a daughter, Cindy. When Cindy was a child, Dragon King already experimented on her and saw her as nothing more than a promising experiment. Among other improvements, he outfitted Cindy with bone blades she could eject from her wrist, but during a tantrum Cindy accidentally used them to kill her mother. At one point, Dragon King got remarried to an unnamed woman only to get divorced. He eventually got married to Bobbie Burman. Dragon King also got into contact with the Injustice Society of America but their relationship was strained at best, with the Wizard especially proving his disliking of Dragon King whenever he could. In order to improve the relationship, Dragon King sent out a proposal to the ISA member Brainwave. He proposed an organized relationship between Dragon King's daughter Cindy, who was very much aware of her father's identity and his crimes, and Brainwave's son Henry King Jr., who did not know about his father's villainy. This proposal allowed Brainwave to keep an eye out on his son via Cindy and to monitor him for developing telekinetic abilities. Brainwave accepted the proposal and Dragon King kept 'improving his daughter'.

Eventually, Dragon King is approached by Icicle, the leader of the Injustice Society of America, who proposes working together in order to succeed in "Project New America". For this project, which would result in the ISA controlling the minds of every adult citizen in several US States and lead to the secession of these states from the United States. In order for the plan to work, the ISA needs Dragon King's support since he is required to build a machine which would allow for Brainwave's telepathic abilities to be broadcast over these states. Dragon King is only too willing to build the machine and announces himself to be a firm believer in the Injustice Society's cause. Back at his lair, he is forced to deal with his rebellious daughter Cindy, who wants a seat at the table and is determined to kill Stargirl. Dragon King coldly orders her to stay put and forbids her to take action.

When Cindy ignores his orders and eventually happily returns to her father's lair and proudly announces that she found Stargirl, she is reprimanded by the angry Dragon King that instead of alerting him, she went after Stargirl herself and nearly compromised Project New America. Despite his daughter's angry protest, he orders her to return home and keep a low profile, viciously threatening to remove his hood if she keeps defying him. For once, Cindy submits to her father's orders but when she ends up in another fight with Stargirl only hours later, Dragon King has Cindy captured by his drones and locks her up in a cell in his lair in order to prevent her from messing up his plans any further. However, Cindy's battle with Stargirl has its benefits since through watching the fight, Dragon King has learned that Henry King Jr. indeed inherited his father's telepathic abilities.

A few days later, Dragon King visits the lair of the Injustice Society in order to brief them on his advancement with the machine. Although many of the villains are uncomfortable with having Dragon King as a partner, only Sportsmaster speaks up and falls silent eventually. Dragon King informs the group that preparations are near completion and that they do not need to wait for Brainwave to wake up since his son has the same telepathic abilities. Dragon King confirms that his machine will be finished within the week and that once it is activated, they will be able of controlling the minds of every adult citizen of six whole states. However, some time later Brainwave awakens from his coma yet has no memories, causing Dragon King to be tasked with re-awakening his memories.

At the same time, Dragon King is handed the staff of Stargirl which Icicle managed to capture. Both the staff and Brainwave are brought to Dragon King's lair where Dragon King starts the procedure on Brainwave. While he manages to retrieve Brainwave's memories, the lair is infiltrated by Stargirls team. From her cell, Cindy warns her father who then sends his drones to fight the intruders. During the battle, Dragon King watches Stargirl taking out several of his drones, resulting in him drawing a sword and and eventually attacking her himself. He manages to overpower her but before he can kill her, Wildcat hurls the Cosmic Staff towards Stargirl. As a result, she can fend off Dragon King's attack, blasts him in the face with her staff – taking off his hood in the process – and then shoots a light beam at him with a horrified shriek once she sees his reptilian face. Dragon King is knocked out and the team is able to flee from the lair.

Eventually, the time has come to turn on the machine. After Dragon King took a successful test run with Brainwave – whose powers have increased after his son's death – Dragon King turns on the machine for real. Brainwave starts affecting the mind of adults in ten states while Dragon King gleefully watches the process. However, before Brainwave is finished, the JSA storms the lair once again in order to stop Project New America. To prevent them from reaching Brainwave and the machine, Dragon King joins up with Icicle, Sportsmaster and Tigress. As a united group, they attack the heroes which results in a fierce battle. During the fight, Dragon King ends up dueling Shining Knight in a sword fight. However, during their battle they inadvertently blast open the lock to Cindy's cell, allowing her to free herself. Furious at her father for imprisoning her for days, she sneaks up to her father just as he is about to execute Shining Knight and kills him when she rams her bone blade through his back. 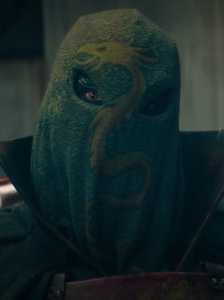 Cindy has defied her father.