Dragon Lord Torch is the former ruler of all dragons in Equestria and a character from My Little Pony: Friendship is Magic, while the modern era version of Torch is largely a neutral character he serves as one of the central villains of a legendary tale, as seen via flashbacks in the "Legend of Flash Magnus".

Dragon Lord Torch and several other dragons would attack Flash Magnus and his group of Legionnaires during the era before the formation of the Wonderbolts, due to the group having to travel across the Dragon Lands to meet up with other members of the Legion on the opposite end of a said territory.

Despite being brave and trained soldiers the Legionnaires are no match for the dragons and several are kidnapped by Torch and his allies, who carry them off to the dragons' lair. Commander Ironhead fears the power of the dragon and almost calls off the idea of rescuing the captured Legionnaires until Flash Magnus volunteers to distract the dragons himself.

Allowing the others to sneak in and rescue their fellow Legionnaires: seeing how brave Flash Magnus was Ironhead gives him a magical shield capable of resisting even the heat of dragon fire and agrees to the plan. Thus Flash Magnus does as he promised and distracted Torch and his dragons long enough for Ironhead and his men to rescue the other Legionnaires - the pegasi then gather a large number of storm clouds, which Flash Magnus leads Torch and the dragons into, this causes a terrible lightning storm which forces Torch and the other dragons to flee, since even dragons can't compete with lightning.

As a reward for his actions, Flash Magnus is allowed to keep the magic shield and becomes the Element of Bravery. 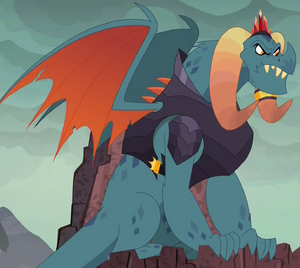 Retrieved from "https://villains.fandom.com/wiki/Dragon_Lord_Torch?oldid=4226996"
Community content is available under CC-BY-SA unless otherwise noted.