Ability to summon both Undead and Daedric warriors

Serve the Dragons in both life and death (succeeded)
Escape Apocrypha, Hermaeus Mora's control, and conquer Tamriel (Miraak; failed)
Come back as a powerful Lich (Hevnoraak; failed)
Escape imprisonment and wreak havoc on Tamriel (Otar the Mad; succeeded)
use Ralis Sedarys to produce sacrifices in which he can use to resurrect himself (Ahzidal; succeeded)
Escape Labyrinthian and take the power of Savos Aren and the Dragonborn
Find the Eye of Magnus (both Morokei; both failed)
Devise a plan to escape Forelhost and kill Skorm and his troops (Rahgot; succeeded)
Keep Anska away from the scroll (Vokun; failed)
Have the Vestige kill the Necromancer who defiled his slumber and turned his warriors into Undead so he can return to the Afterlife (Haldriin; succeeded)
Guard the Fork of Horripilation from anyone who tries to take it (Korthor; failed)
Guard the Shard of Wuuthrad from anyone who tries to take it (Vosis; failed)

The dragon priests themselves can be traced back to Atmora, where they were the ruling body during the Merethic Era. Known as the "Dragon Cult," they worshipped many animals as avatars of the gods, the Dragon being chief among them.

Dragons embraced their role as god-kings over men, but rather than deal with the actual ruling itself, they granted small amounts of power to dragon priests in exchange for absolute obedience. In turn, the priests ruled men as equals to the kings. The priests set down laws and codes of living that kept peace between Dragons and men, but to do so they demanded tribute.

When the Atmorans began to migrate to Tamriel over the next several centuries, the dragon priests and cultists were some of the first men to arrive. The system of rule in Tamriel, however, was quite different from Atmora. It is unclear why this was the case, but the priests began to rule with an iron fist, making slaves of the rest of the population.

At the height of the dragon cult's influence, the capital of Skyrim was considered to be the city of Bromjunaar, located in what is now Hjallmarch hold. It was here the highest ranking priests met within the temple of Labyrinthian to confer about matters of ruling. It was also during this time that the highest-ranking dragon priests were granted magical masks that defied the laws of time, and bore powerful enchantments. It is unknown if masks were named after the priests who wore them, or if the priest took on the name of the mask that was granted to them.

Eventually, men rebelled against the cruelty of the cult in what is known as the Dragon War. After Alduin was banished from Nirn, a large number of the cultists were killed and the surviving dragon priests were overthrown.The survivors adapted and went into hiding all across Skyrim. They entombed the remains of the dragons that died during the war within Dragon mounds, with the belief that Alduin would one day return and resurrect the faithful. However, other sects within the cult believed only those who ascended to the priesthood would be granted a second life.

Upon death, the dragon priests insisted that their followers be buried with them in the various Dragon temples and tombs across Skyrim. This act served a specific purpose, rather than a vain display of power. Because the concept of resurrection upon the return of Alduin was a core belief of the dragon cult, the priests required their followers to perform a daily ritual to facilitate this. The Dragon Priest Hevnoraak planned his resurrection obsessively, and sought to come back as a powerful Lich.

Every day, a group of followers that were entombed with the priest would awaken and gather around the sarcophagus of their respective priest. Here, they would prostrate themselves before it for several hours. During this time, an exchange of life force took place between the followers and the priest. This exchange sustained the dormant priest until it was time for his resurrection. Once the ritual was complete, the followers meticulously cleaned the area and would return to their burial chambers. While resting, the drained life force would magically restore itself, ready for the next day.

It is believed that the followers who were doomed to perform this ritual were initially buried as grown men and women, but over thousands of years they deteriorated into the draugr that now pledge to guard the ancient Nordic tombs with their lives.

The last known remnants of the dragon cult remained up until 1E 140, when a legion of King Harald's soldiers discovered a hidden stronghold of cultists in the secluded monastery, Forelhost, high in the Jerall Mountains. They shortly laid siege to it. The soldiers spent several weeks trying to break into the monastery, but the cultists put up a heavy resistance. It was only through the power of a young voice-master that they were able to breach the main gate. But the cultists (led by Dragon Priest Rahgot) had been preparing for this inevitable outcome. They had prepared a special poison that would kill them all so when the soldiers found the bodies, they would be deterred from investigating the monastery further and so Rahgot and his most faithful would survive. The plan worked and the soldiers withdrew, though Rahgot and the survivors eventually died of age.

True to the prophecy, the Dragons returned to Tamriel and with the sign they'd been waiting for, the Dragon Priests awoke from their ancient slumber. Though their rebirth was short-lived however, as the Last Dragonborn, who had been prophesied to slay Alduin, began to put them down again. Evenutally, the Dragonborn slew all 8 of Skyrim's main Dragon Priest leaders, and took their masks to the Labyrinthian. Here, they placed all 8 masks on a shrine, and using a strange wooden mask carved in their image, managed to acquire the Konahrik mask. The Dragon Priests most powerful artifact. Miraak, a renegade dragon priest and self-proclaimed 'First Dragonborn', was able to survive until 4E 201 in the daedric realm of Apocrypha before he was defeated by the Dragonborn after attempting to enslave all of Solstheim. 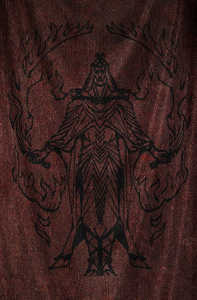 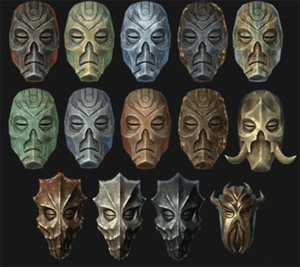 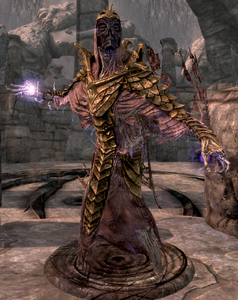 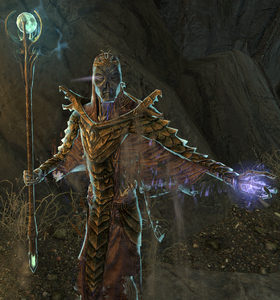 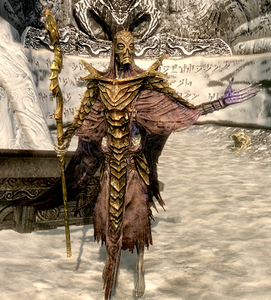 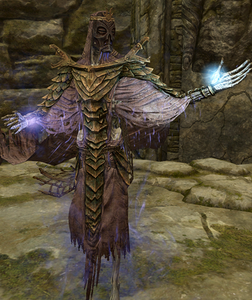 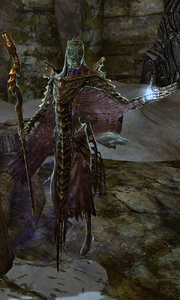 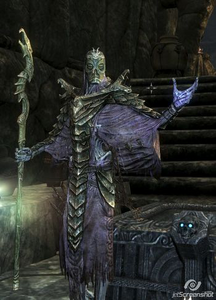 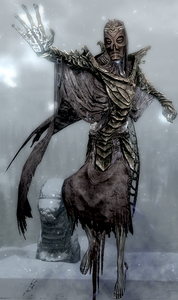 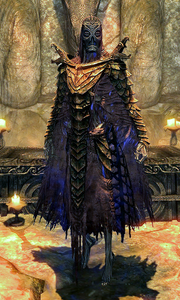 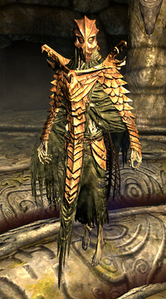 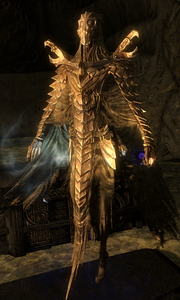 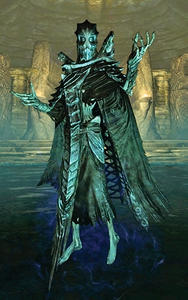 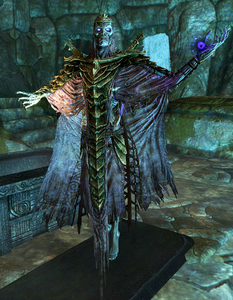 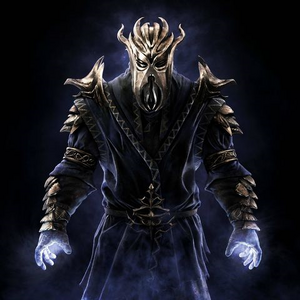 Miraak
Add a photo to this gallery
Retrieved from "https://villains.fandom.com/wiki/Dragon_Priests?oldid=3499706"
Community content is available under CC-BY-SA unless otherwise noted.