Dragon of the Moon

The Dragon Of The Moon is a malevolent godlike entity from Marvel comics and an antagonist whose sinister influence has affected various heroes and villains across the Marvel universe.

The sole survivor of an ancient race of demons, the Dragon of the Moon seeks to gain power by corrupting the human race. The Dragon once allied with Mordred who was trying to overthrow King Arthur Pendragon of Britain, but it was defeated and imprisoned within Saturn's moon Titan by the Eternals. The Dragon later managed to corrupt Thanos, who murdered most of the population of Titan. It also began to corrupt Moondragon. With the aid of the Defenders, Moondragon was freed and the Dragon destroyed.

During Quasar's quest to find the Kree savior, Moondragon began suffering from the same headaches that signaled the coming of the Dragon of the Moon, eventually in battle with the Phalanx and near death, she succumbed to the Dragon and was transformed again.

Dragon Of The Moon is virtually all-powerful and godlike in scale, specializing in corrupting others into doing evil. 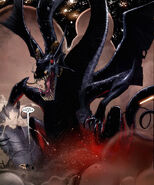