Main goals:
Slay Alduin.
Kill all dragons and vile creatures in Skyrim.
End Skyrim's Civil War.
Optional goals:
Bring the Dark Brotherhood to glory.
Seek revenge on Mercer Frey and prevent him from killing the Nightingales.
Kill Grelod the Kind as a request of Aventus Valentino.
Take over the Thieves guild and restore it to its former glory (all succeeded).
Help Lord Harkon and his Vampire coven achieve their goal of blotting out the sun (formerly).
Slay Harkon.
Destroy the Dawnguard.
Defeat Lord Miraak and save Solstheim from his grasp (all succeeded).

The Last Dragonborn is the main protagonist and playable character of The Elder Scrolls V: Skyrim, as well as its expansions, Dawnguard and Dragonborn. While they are usually a hero, their morality depends on the player's choices, and at certain points in the game, the player is given the choice to commit terrible, sometimes atrocious acts.

While the history of the last Dragonborn is entirely up to the player, there are a few hints throughout the game that are either dependent on the player's responses to certain questions and what's already confirmed in lore through context clues.

Firstly, it's possible and highly likely that the Dragonborn isn't from Skyrim at all, given how they were arrested before the start of the game for "trying to cross the border" illegally into Skyrim. If they were already a citizen from Skyrim, this would have never been an issue in the first place and the Dragonborn wouldn't have been arrested, therefore never starting the events of the game.

If the player ever does the quest "No On Escapes Cidnha Mine", a prisoner named Braig can ask the player about their past. Firstly, he'll ask the Dragonborn about the first time they've been arrested and one of the responses will be "Young. I've always been known to get into trouble", implying that the Dragonborn already had a criminal past even before the events of the game. Next Braig will ask if the Dragonborn has any family waiting for him, and they player can either say that they do but none are in Skyrim (once again implying they're a foreigner), that the only family they have are close friends, or that they don't have any family they particularly care for or like to mention.

Whenever the Dragonborn speaks with Serana, they can talk about whether or not they had a good relationship with their parents growing up and whether or not they're alive, as well as possibly mentioning they're an orphan who never knew their biological parents.

In Super Smash Bros. Ultimate, a Mii Costume of the Dragonborn for the Mii Swordfighter appears as purchasable DLC released alongside Kazuya Mishima's release as a playable character. Its appearance is based on the design used for the Dragonborn in promotional material.

Vamplordcrop 03.png
The Dragonborn in his vampire lord form. 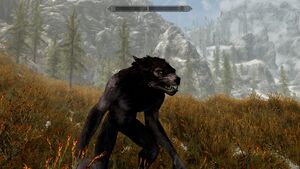 The Dragonborn in his werewolf form.