Conquering worlds.
Manipulating those who against him to do his bidding.

Take over the kingdom of Alefgard (failed).

Wipe out the entire Mankind as they were corrupt as his monsters
Kill The Hero (failed).

The Dragonlord (竜王/りゅうおう, King Dragon in Japanese), also sometimes known as Dracolord while in his wizard form, is the main antagonist and final boss of the Famicom/NES game Dragon Quest (formerly known as Dragon Warrior in the US) as well as its MSX, Super Famicom, Game Boy Color and iOS/Android remakes. He sank the kingdom of Alefgard into darkness and kidnapped the princess of Tantegel.

He received another major antagonist role in Dragon Quest Builders, which takes place in an alternate scenario where he Hero from Dragon Quest chose to join forces with the Dragonlord, instead of battling him. A very determining choice, infamous in jRPG video games history.

He stole the mystical Sphere of Light in order to flood the world with demons and monsters while also kidnapping Princess Gwaelin for unknown reasons. As the successor of the legendary hero Erdrick, the game's Hero is tasked with defeating this menace.  Right before the final battle, the player should be wary when the Dragonlord asks the hero to join him because answering "yes" triggers an immediate Game Over. If "no" is chosen, the final battle begins. The hero begins battling him in his sorcerer form and after he's defeated, he will change into his dragon form.

In the alternative scenario where the Hero joins him, he will proceed to use the Sphere of Light to engulf Alefgard in total darkness (just as the great evil who preceded him did), strip humanity from the vital skill of construction, and leave them at their fortune in a monster-infested world, likely in hopes that they would turn to him as their new king and savior. Reaching to mankind's plights, Almighty Rubiss sends forth a savior called the Legendary Builder to deliver Alefgard from the darkness and suffering.

The Dragonlord is one of the unlockable, playable characters in Fortune Street and Itadaki Street DS.

Dragonlord appears as a legacy boss. His map is randomly dropped by Greygnarl in the grottoes.

His two forms are common monsters in the series. His sorcerer form can be synthesized with a Demon-at-Arms and a Great Dragon. His dragon, two-space form requires Dracolord (his first form), a Gem Slime, a Captain Crow, and an Alabast Dragon. Dracolord is a Rank S monster; Dragonlord is Rank X and they're both of the Dragon Family.

He appears as one of Nokturnus' finest warriors, and he's the final opponent that the player must face in the Dragon Quest I story arc.

This fiend appears in Dragon Quest X inside the new Dragonlord's Castle location as part of the "Battle of the Dragonlord Castle" event in as part of the series' 30th anniversary celebration. The castle is an enhanced 3D version of the last chamber in the original game. The Dragonlord appears in his sorcerer form and tempts the Hero into joining him, just like in the original game. If the player refuses, the sorcerer will immediately transform into his well-known dragon form. His wizard form is not fought in this game.

While the Dragonlord himself does not appear, the final boss of Hero's Classic Mode campaign "A History of Heroism" is based on him. His first form is Robin, and once he is defeated, turns into a giant purple Charizard.

Dragon Quest became the first in a series of classic role-playing videogames where, even if dragons became less relevant in several of the following installments, the name "Dragon Quest" remained, reminiscing of the very first quest for the Dragonlord. This sorcerer also holds the title of being the first turn-based battle JRPG final boss.

He first appears as a blue-skinned wizard with yellow eyes and a pair of horns. He wears purple robes, a golden necklace with a red orb and bears a wooden dragon-shaped staff in his left hand.

His true form is revealed to be a large purple dragon with red horns and a yellow underbelly. This form is probably where his name, as well as the the series' name, come from. 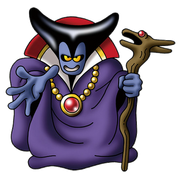 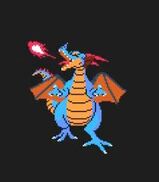 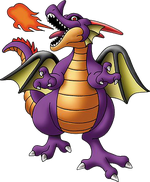 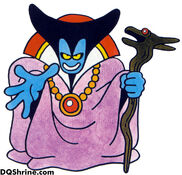 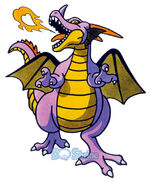 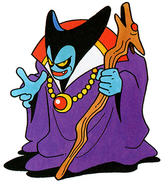 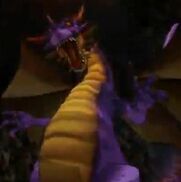 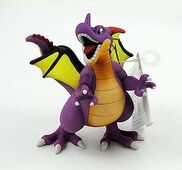 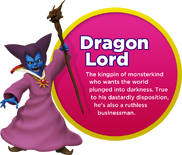 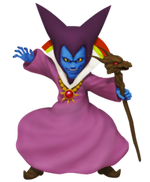 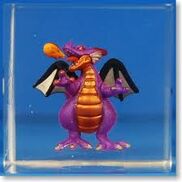 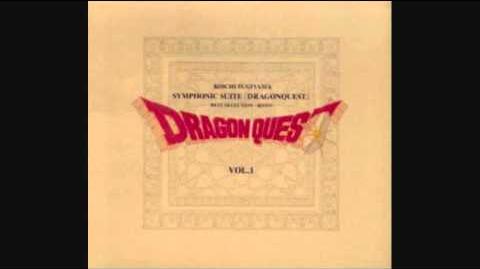 Retrieved from "https://villains.fandom.com/wiki/Dragonlord?oldid=3255313"
Community content is available under CC-BY-SA unless otherwise noted.