King's Quest I: Quest for the Crown

Various depending on members.

Monstrous Dragons
The Dragon, as they are called, are dragons and a species in the King's Quest adventure game series including King's Quest I: Quest for the Crown.

Most Dragons are, as everyone knows, mostly evil and ferocious reptilian creatures, usually green and of enormous size that breathe fire. Apart from the traditional kind of dragons, there is also the Two-headed Dragon (which has regenerative powers), the Dragon Wyrm and the Three-headed Dragons. Though most common dragons have green scales, they can come in assorted colors. Blue firedrakes have been seen, and there is documented evidence of red dragons (though that variety seems to be rare).

One of the most widespread creatures of human myth, dragons are usually—but not always—thought as huge, fire-breathing lizards or snakes. Dragons have been feared and worshiped since the beginning of recorded history, and the belief was ancient even then. While many cultures think of the dragon as evil, the Greeks, Romans, and Chinese sometimes thought of them as wise and powerful dwellers of the inner earth and used the image of the dragon on some of their standards. In more recent times, fantasists have more and more attributed benign qualities to the creatures. It is not known what the origin of the dragon myths is. It cannot be the memory of the dinosaurs because humanity and dinosaurs never existed at the same time. Not all dragons breath fire, and some are known to fling frost.

After the Sorcerer stole Merlin's Mirror he put it under the guardianship of a dragon. The dragon is said to have a head similar to a pterodactyl. It was a ferocious, fire-breathing dragon with sharp, green scale, and a long tail. Graham encountered this dragon in the Dragon's Lair. From across the cave, the heat of the sulfurous flames singed Graham's hair. The dragon made half-rushes back and forth at him, taking its time before making a killer charge. Graham tested the balance of his dagger, knowing he had only one chance to strike the dragon in its heart. In order to distract the dragon to give himself more time to aim and a clearer target, he hefted a bucket of water, and just as the dragon exhaled , he flung the water into its snout. He had extinguished the dragon's flames, it stopped and sputtered, steam and bubbles gurgling form its nostrils. Graham stayed the dagger in his hand, seeing the look of embarrassment on the dragon's monstrous face. It dropped its head, and tucked its tail, and the beast pushed a boulder aside and pussyfooted out of the cave.[3] Graham successfully defeated the dragon without any violence. The green dragon later attended Graham's wedding in Kolyma at the Monastery of the Blessed Wilbury.

Another type of dragon are Crystal Dragons, are the exception to the rule for being benevolent. One crystal dragon lives in Vulcanix Underground, another lives in Frozen Reaches

The head of a slain dragon was used for decoration in Julia's Tavern.

Telgrin could cast a spell forming a magical dragon.

Dragons come in different shapes and sizes. Some are green, others red, some blue. Some have wings, others do not. Some can fling fire, others can fling ice.

Many dragons may be capable of speech but, but for firedrakes when they talk things have a tendency to catch on fire. 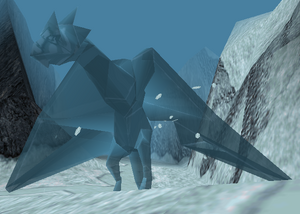 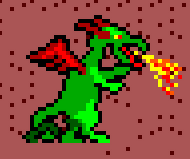 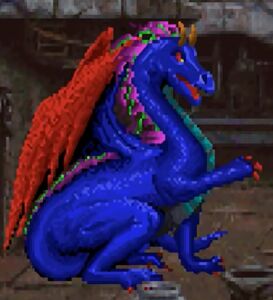 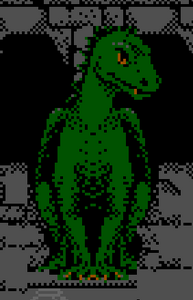 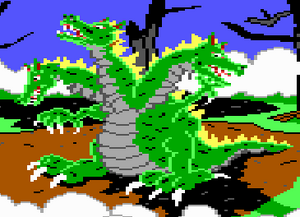 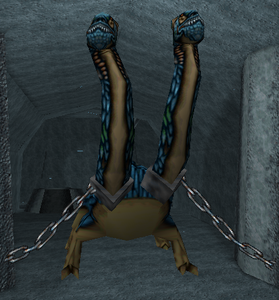 Retrieved from "https://villains.fandom.com/wiki/Dragons_(King%27s_Quest)?oldid=3524824"
Community content is available under CC-BY-SA unless otherwise noted.