Villains Wiki
Register
Don't have an account?
Sign In
Advertisement
in: Evil from the Past, Dragons, Live Action Villains,
and 23 more
English

The Dragons are the main antagonistic race of the 2002 science fantasy film Reign of Fire.

Initially dismissed by modern humans as a myth, these flying monsters' existence later confirmed upon the awakening of their first pack by construction workers that unintentionally unearthed the Bull Dragon, the alpha-male of their kind. More dragons follow soon after, and came close to eradicate the human race. It's proposed that firsts of their kind first emerged during the end of the Mesozoic era and thus responsible for dinosaurs' extinction.

Their vocal sound effects were provided by Jon Olive.

The Dragons (or most likely their progenitor species) first appeared on Earth in prehistoric times during Mesozoic era and lived alongside dinosaurs for a long time before eventually killed them all by burning them in an event come to be known as the K-T extinction. Afterwards, the Dragons went into hibernation, waiting for the Earth to replenish all life that has been destroyed by them. These creatures' deadly capabilities even attributed as the catalyst of the Ice Ages, another prehistoric period on Earth.

Though remained hidden for millennia, modern man encountered the hibernating Dragons around the Viking Age and the Middle Ages as many were slaughtered by Vikings and Knights. These events inspired mankind for myths that involve Dragons and their infamous reputation, unaware that they only knew little of them and the number of slaughtered Dragons were only a tiny fragment of the portion of their overall population on Earth.

In the early 21st century during construction on the London Underground, a male Dragon was uncovered by workers and killed all the humans who had found them. One boy named Quinn survived the Dragon ambush and feared them. Years later, the females woke and managed to kill off humanity and rule Earth, hunting any human survivors.

Now a young man, Quinn grows up leading a community of survivors. Some of Quinn's survivors get rebellious against his rule and they go out illegally at night to pick apples and steal the crop. They are ambushed by a Dragon who eats one of them. Later they meet an American survivor called Zann who claims to be a Dragon killer. There, it turns out that the Dragons have only one male in the colony, as the rest were female. Quinn realizes that the male was the Dragon that killed his mother, and if he can kill the male, the others will be unable to reproduce. Quinn goes to the nesting place of the Dragons alongside Jensen and Zan. He fights the male Dragon and eventually, Quinn throws a bomb down its mouth in retribution for the death of his mother and the downfall of mankind.

The remaining Dragons apparently begin to dwindle afterwards with the Male's death; they are at any rate not seen or heard of. Quinn doubts their another possible resurgence; but remains prepared and says he will fight if they do return, claiming that "They'll burn, we'll build."

All dragons exhibited aggressive and territorial behavior, burning everything on their path and killing those who stand on their own way to feed on their charred mass or as enemies. Because of their intelligence and hostility towards any rival dominant species on the planet to the point of borderline genocidal, they pose considerable threats than simple instinctive beasts some perceived them as.

However, the Dragons' lack of concern towards non-human life throughout their conflict against mankind ultimately contributed to their downfall in modern day. In their pursuit of becoming the most dominant species on the planet, they burned more than what they can eat, resulting food to become scarce that some either died out or cannibalize one another to survive. It was at that very point persevering humans eventually managed to fight back and successfully retake their planet in the end.

Although they basically evoke the image of wyverns because of their massive wings being modified forelegs akin to bats instead of separate limbs, Dragons nevertheless evoke their race's mythical image; massive reptilian creatures with scales, horns, long tail, and leather wings. Average dragons are typically 45–50 feet long with a wingspan of twice, though males' are thrice as big.

In stark contrast of most species which female tend to be bigger than male, males of these creatures are rather big, possessing wingspan of thrice of his length while females only twice. Other difference between both sexes are minimum yet evident facial features: Females have longer snout along with straight upper horns that relatively straight, whereas males' snout is much shorter and their horns are longer and curved.

The egg of a dragon has a rather red/orange transparent colour and is about 1.5x0.7 feet.

Similar to their common depiction, dragons possess deadly ability to breathe fire. Instead of magic, the ability is made possible by two glands in their mouth cavity that project two fluids which combine just in front of the mouth to form a natural napalm (although it acts more like nitroglycerin as the mixing of the fluid causes the ignition). They also possess the ability to fly thanks to their large wings and durable hide that provide resistance to gunfire.

The dragons' greater strengths are their intelligence and reproduction ability: Van Zant theorized that rather than mating with females one by one, males would fertilize all available eggs that have been placed in large bodies of water like salmon, which is effective to maintain their population and make up males' apparent low birth rate. A testament of their great intelligence is how they outsmart and nearly wiped out humanity throughout their conflicts as well as properly remain stealthy even while flying. Although he can decimate an entire military convoy straight away, Bull Dragon opted to study their pattern first before deciding the best course of action so he won't have to sustain injuries in the attempt. Similarly, he remains cautious when fighting Quinn at the climax of the film, and only defeated by a slight mistake.

The Dragons possess two Achilles' heels beside dependence on males: Their volatile glands and vision. If the glands got ignited prematurely, it will dangerously blown the beasts from inside out. However, this weak point is greatly difficult to exploit as they breathe fire as soon as they open their mouth, with Quinn is the sole individual who managed to do so. Although they share similar vision with humans', they cannot see through extreme heat emitted by heat sources such as fire (anything that surrounded/stand behind heat sources are blurred in their POV), which explained why they can't see well in the light of dawn and dusk. Quinn unknowingly exploited this limitation when he is about to shoot his explosive arrow into Bull Dragon's mouth, provoking the beast to expose his glands and subsequently killed him. 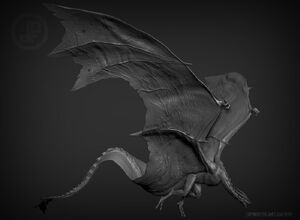 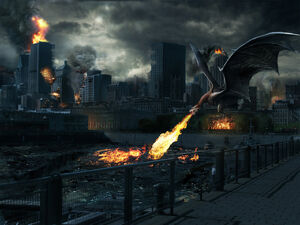 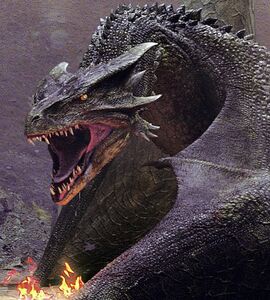 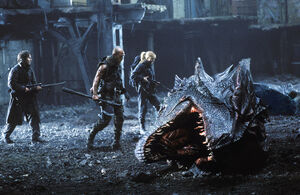 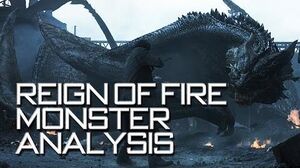 Reign of Fire - All Sightings