Legends and Folklores around the world

Various, but primarily originated from Earth

On & Off Villains of Folklore
Dragons are very popular antagonists in folklore, mythology and fairytales, though it is worth noting this tends to only apply to Western cultures, as other cultures (such as China) had a more positive view of dragons (which also spread to the West in time).

Although many are typically depicted as villains, some incarnations (such as those in Eastern Cultures) are depicted as being more heroic.

The word dragon entered the English language in the early 13th century from Old French dragon, which in turn comes from Latin draconem (nominative draco) meaning "huge serpent, dragon", from the Greek word δράκων, drakon (genitive drakontos, δράκοντος) "serpent, giant seafish". The Greek and Latin term referred to any great serpent, not necessarily mythological, and this usage was also current in English up to the 18th century.

Dragons were originally depicted as giant fire-breathing snakes, often with wings and they would stand as the ultimate opponent to a brave knight or ancient hero. One of the most famous examples of this type of story was Saint George and The Dragon, in which the brave knight went forth to slay a fearsome dragon to save a beautiful princess from its terrible grasp, this story became so popular that it has inspired innumerable adaptations in film and literature.

Other examples of dragons as antagonists in fairytales can be found in stories such as Sleeping Beauty, in which the evil fairy transforms herself into a gigantic dragon (a scene made famous by Disney in their adaptation of the fairytale, in which Maleficent's final form is a large black dragon).

Sometimes, a dragon was not a winged reptile but rather a gigantic snake, known as a "Wyrm". These dragons were said to live in water or in wells and they often grew so large that brave heroes were called upon to slay them and save livestock or people from their often immense appetites.

As with many characters in folklore, dragons may have been symbolic, a way of expressing how brave a hero was by having them defeat a seemingly unconquerable foe (in a similar fashion as Giants were often used to symbolize the defeat of bigger enemies, such as military powers or invaders).

Dragons have also been given a malevolent role in the scripture of many religions, especially Christianity, due to their serpentine nature, they are often associated with the Devil and indeed one of the many forms given to the Devil is that of a dragon: he is also said to take the form of a large serpent (as he had done in the Garden of Eden).

However, there are stories where dragons are merely wild animals struggling to survive.

Depending on their physical appearance, dragons can be divided into the following groups:

In the early Vedic religion, Vritra (Sanskrit: वृत्र (Devanāgarī) or Vṛtra (IAST)) "the enveloper", was an Asura and also a "naga" (serpent) (नाग) or possibly dragon-like creature, the personification of drought and enemy of Indra. Vritra was also known in the Vedas as Ahi ("snake") (अहि), and he is said to have had three heads.

In the text Life of Apollonius of Tyana written by Flavius Philostratus, it contains a long detailed description of India heavily infested with dragons. However, this does not correspond with modern Indian belief, and likely not with Indian belief as it was in his time, whether Apollonius invented this story, or whether he believed someone else who told him it.

Aži Dahāka is the source of the modern Persian word azhdahā or ezhdehā اژده ها (Middle Persian azdahāg) meaning "dragon", often used of a dragon depicted upon a banner of war. The Persians believed that the baby of a dragon will be the same color as the mother's eyes. In Middle Persian he is called Dahāg or Bēvar-Asp, the latter meaning "[he who has] 10,000 horses". Several other dragons and dragon-like creatures (all of them malevolent) are mentioned in Zoroastrian scripture.

In Jewish religious texts, the first mention of a dragon-like creature is in the Biblical works of Job (26:13), and Isaiah (27:1) where it is called Nachash Bare'ach, or a "Pole Serpent". This is identified in the Midrash Rabba to Genesis 1:21 as Leviathan from the word Taninim (תנינים) "and God created the great sea monsters". In modern Hebrew the word Taninim is used for Crocodiles but this is a 20th-century usage unconnected with the original Biblical meaning.

In later Biblical texts, the Book of Isaiah, the Book of Job, and Psalm 89 refer to a sea-demon called Rahab (not to be confused with Rahab, the woman of Jericho mentioned in the Book of Joshua). AB equates this Rahab with a dragon or monster. "Rahab" is the English transliteration of רהב (reb) with the several meanings: pride, a mythical sea-monster, or Egypt (as an emblematic name). In the Douay-Rheims version, translated via Medieval Latin from the Vulgate, the word reb is rendered "the proud one" in DRA and "the power of the sea" in DRA (Psalm 88 is equivalent to Psalm 89 in other versions due to different verse numbering in the Vulgate). The connection between the sea monster and "Leviathan the serpent" is made in KJV.

In Jewish astronomy, this is also identified with the North Pole, the star Thuban which, around 4,500 years ago, was the star in the Draco constellation's "tail". However, this can also have been either the celestial pole or the ecliptic pole. The ancient observers noted that Draco was at the top of the celestial pole, giving the appearance that stars were "hanging" from it, and in Hebrew it is referred to as Teli, from talah (תלה) – to hang. Hebrew writers from Arabic-speaking locations identified the Teli as Al Jaz'har, which is a Persian word for a "knot" or a "node" because of the intersection of the inclination of the orbit of a planet from the elliptic that forms two such nodes. In modern astronomy, these are called the ascending node and the descending node, but in medieval astronomy, they were referred to as "dragon's head" and "dragon's tail".

The Merthyr Synagogue features a dragon on the front gable.

Animals that may have inspired Dragons

It has been speculated that accounts of spitting cobras may be the origin of the myths of fire-breathing dragons just as the same accounts with mythological basilisk (the latter case's killing gaze has something to do with spitting cobra's tendency to spray their enemies' eyes).

Nile crocodiles (today very restricted in range) were in ancient times occasionally found in Southern Europe, having swum across the Mediterranean. Such wayward crocodiles may have inspired dragon myths. Skeletons of whales, as well as dinosaur and mammalian fossils may have been occasionally mistaken for the bones of dragons and other mythological creatures; for example, a discovery in 300 BC in Wucheng, Sichuan, China, was labeled as such by Chang Qu. Adrienne Mayor has written on the subject of fossils as the inspiration for myths in her book The First Fossil Hunters, which was published in 2000. And in an entry in the Encyclopedia of Geology, she wrote: "Fossil remains generated a variety of geomyths speculating on the creatures' identity and cause of their destruction. Many ancient cultures, from China and India to Greece, America, and Australia, told tales of dragons, monsters, and giant heroes..".

In Australia, stories of such creatures may have referred to the land crocodiles, Quinkana sp., a terrestrial crocodile which grew to 5 to possibly 7 meters long, or the monitor lizard Varanus priscus (formerly Megalania prisca) a giant carnivorous goanna that might have grown to 7 feet, and weighed up to 1,940 lbs, or rainbow serpents (possibly Wonambi naracoortensis) that were part of the extinct megafauna of Australia. Today the Komodo monitor lizard Varanus komodoensis is known in English as the Komodo dragon.

In the 2000 book An Instinct for Dragons, the anthropologist David E. Jones suggests a hypothesis that humans just like monkeys have inherited instinctive reactions to snakes, large cats and birds of prey. Dragons have features that are combinations of these three. An instinctive fear for these three would explain why dragons with similar features occur in stories from independent cultures on all continents.

In Slovenia, Janez Vajkard Valvasor compile folk stories on the Olm, a subterranean salamander, in the late Johann Weikhard von Valvasor's 1689 book The Glory of the Duchy of Carniola. It is mentioned as a baby dragon. Heavy rains of Slovenia would wash the olms up from their subterranean habitat, giving rise to the folklore belief that great dragons lived beneath the Earth's crust, and the olms were the undeveloped offspring of these mythical beasts.

In the early 20th century sculpture of the late Norwegian artist Gustav Vigeland, inspired by Medieval art, dragons are a frequent theme — as symbols of sin, but also as a nature force, fighting against man.

The popular roleplaying game system Dungeons & Dragons (D&D) makes heavy use of dragons, and has served as inspiration for many other games' dragons. Though dragons usually serve as adversaries, they can be either good or evil, with their alignment being determined by their species. For example, a red dragon is evil and breathes fire.

There is a widespread belief that earlier cartographers used the Latin phrase hic sunt dracones, i.e., "the dragons are here", or "here are dragons", to denote dangerous or unexplored territories, in imitation of the infrequent medieval practice of putting sea serpents and other mythological creatures in the blank areas of maps. However, the only known use of this exact phrase is in the Latin form "HC SVNT DRACONES" on the Lenox Globe (ca. 1503–1507).

Another map that contains dragons is the one of Bishop Olaus Magnus'. The Carta Marina map of Scandinavia (1539) has many monsters in the northern sea, as well as a winged, bipedal, predatory land animal resembling a dragon in northern Lapland. 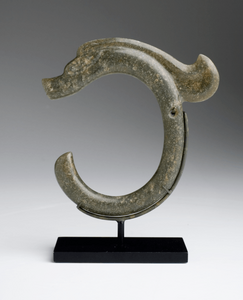 Earliest known depiction of a dragon from Ancient China, in a stylized C-shaped representation carved in jade belonging to the Hongshan culture, which thrived between 4500 and 3000 BC/BCE. 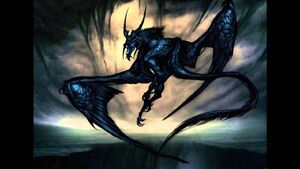 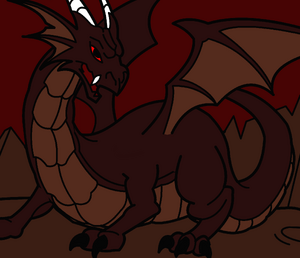 A cartoon image of a dragon. 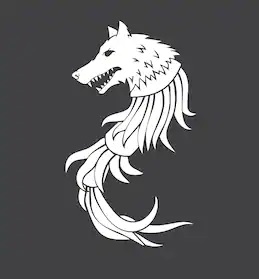 Dacic Wolf, a creature with the body of a dragon and the head of a wolf 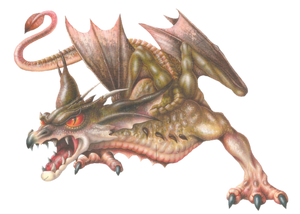 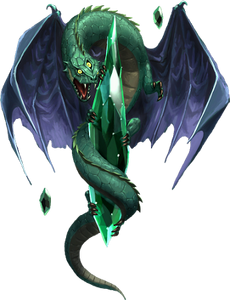 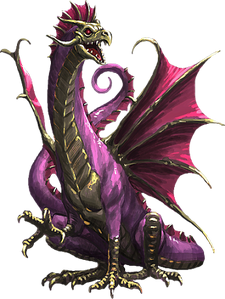 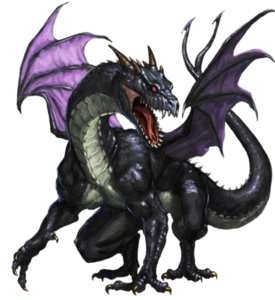 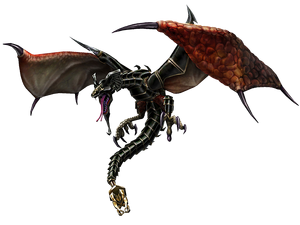