Landlord and a warlord in Outworld (in his former life)

Oni Tormentor in the Netherrealm

Tormenting and feasting on souls.

Have his revenge on Quan Chi.

Gain the god-like power of Blaze.

Torture
Use of dark magic

Drahmin is an Oni from the Nether-Realm and an antagonist from the Mortal Kombat series of fighting games.

Prior to being banished to the Nether Realm and bearing the moniker Drahmin: the Oni Tormentor, Drahmin was already a cruel and remorseless warlord. He allied with Moloch and the two travel the hellish realm and bring about the suffering of souls. Drahmin immediately accepted Qaun Chi's proposal to escape the Netherrealm. He also has a vengeful side to him and promises to track down the sorcerer for leaving without them.

Drahmin wears his mask to suppress his rage, but without it, he showcases a murderous insanity, attacking all around him without mercy. In his Armageddon ending, Drahmin's bloodlust had escalated to the point that he turns on his only ally Moloch, however that was just the beginning.

Drahmin was a cruel human landlord from Outworld and a warlord. After a lifetime of sin and his death, his soul was cast down to the Netherrealm for his crimes. Driven mad in its depths, he eventually accepted his fate and became Drahmin, the Oni tormenter. He later met and allied himself to a fellow oni, Moloch, and began wandering the Netherrealm, seeking out and torturing souls they came across.

Eventually, Drahmin and Moloch met up with the sorcerer, Quan Chi, who was fighting Scorpion. Unable to fight the mighty specter, the sorcerer asked for the oni's assistance and so the two intervened and drove the ninja off. However, Drahmin and Moloch seek retribution, when Quan Chi, who do not keep his part of the bargain, escaped the Netherrealm. The bargain was that he would take them with him via an ancient structure that was supposedly a gateway to other realms. However, the sorcerer realized that this was a dormant portal that he could activate with Shinnok's amulet. However Scorpion chose this moment to attack and while Drahmin and Moloch fought him, Quan Chi opened a portal to Outworld through which he escaped. But the three followed him and the two Oni found themselves in a different part of Outworld with no sign of Quan Chi or Scorpion.

While they scoured the wastelands, the two Oni had killed everyone they came across. The pair had encountered both Cyrax and Lei Mei, who were able to escape their clutches. They were found by Shang Tsung (after the Deadly Alliance was formed) and recruited them as his backup defense against Quan Chi. They were periodically fed mortal to keep them satisfied. The two had yet again encountered Scorpion; although they're unable to devour him, they instead tossed him into the Soulnado. In his non-canon Deadly Alliance ending, Drahmin and Moloch were freed by Shang Tsung to confront Quan Chi at his fortress, the two Netherealmers fought and had stumbled in the inner sanctum chamber, where he emerges as his former human self.

In his Armageddon ending, Blaze's godlike power fused within Drahmin's mask, transforming him to three times his normal size. He then turned on his former ally Moloch and killed his former partner, though his bloodlust had only just begun.

Drahmin like Moloch only had a brief appearance in the comics they tried to stop Scorpion from leaving the Nathrealm only to fail. Scorpion escaped and Quan Chi has them killed Moloch has his head cut off by Revenant Kitana and Drahmin had his skin burned off of his body leaving only his bones. After their deaths Revenants Kitana, Kung Lao and Liu Kang became Quan Chi's top commanders.

Drahmin does make a appearance in the game do to the fact he died in the Mortal Kombat X comics. However his mask can be found in a DLC called the Krypt. It is a location on Shang Tsung's Island and is full of many treasures. Some information of Drahmin can be found after finding the mask the information reveals that Shaug Thung killed Drahmin in another time line and took his soul.

Drahmin has superhuman abilities granted from being an oni, which, when combined with his Iron Club and unrestrained rage, makes him a deadly foe. He can also form the flies around his body into a makeshift projectile.

In Deadly Alliance, Drahmin (assisted by Moloch) was able to overpower and defeat Scorpion.

In his Armageddon ending, Drahmin becomes three times his normal size and was able to best Moloch in combat. 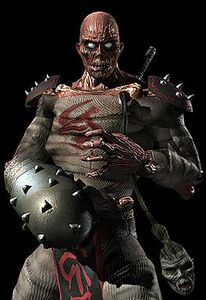 Drahmin the Oni Tormentor in his ceremonial garbs in Mortal Kombat: Deadly Alliance. 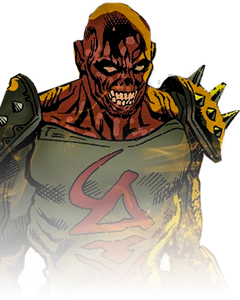 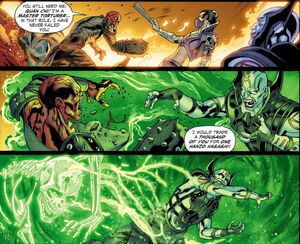 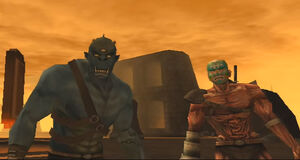 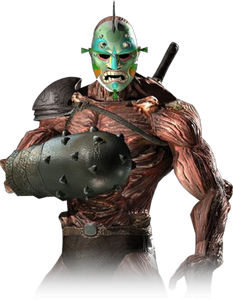 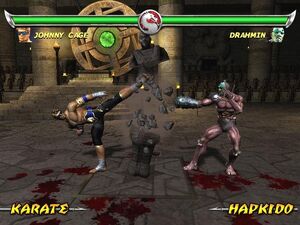 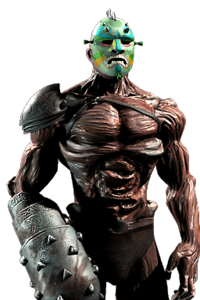 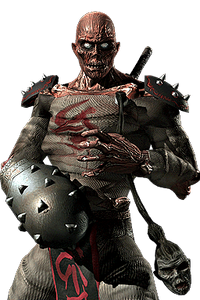 Drahmin and Moloch vs. Quan Chi. 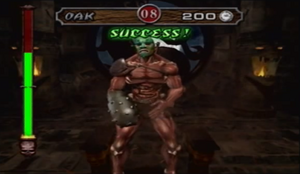 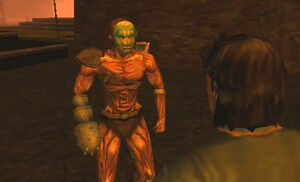 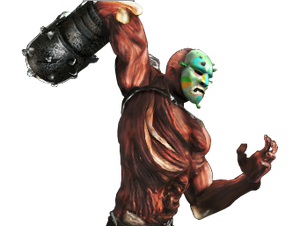 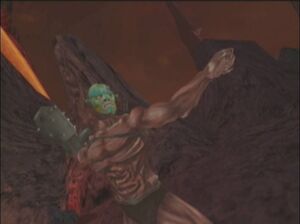 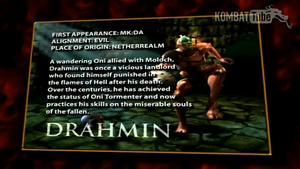 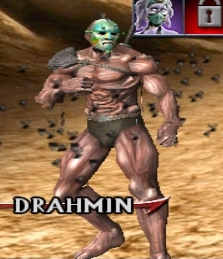 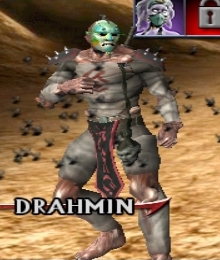 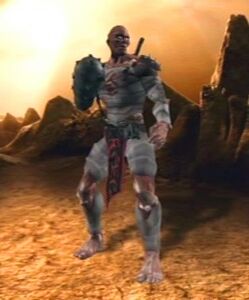 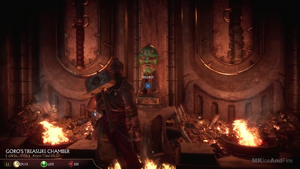 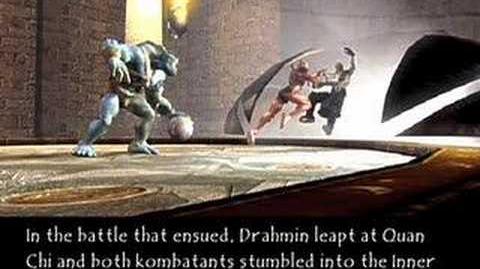 Retrieved from "https://villains.fandom.com/wiki/Drahmin?oldid=3535805"
Community content is available under CC-BY-SA unless otherwise noted.