Drakath is a major villain in the AdventureQuest universe, which includes many related Flash-based online games: his most prominent role is in AdventureQuest Worlds (a MMORPG).

Drakath is a Champion of Chaos and the main antagonist of Adventure Quest Worlds. He was the son of the former king, Slugwrath. In DragonFable it is said that he and Sepulchure had a deal that Drakath would receive the Necrotic Blade of Doom to get his kingdom back. In exchange for the Doom weapon, Sepulchure wanted the white and black dragon boxes. Because Drakath couldn't get both boxes, (thanks to the hero from DragonFable), he didn't get the sword (Until he used it to stab Sepulchure). He seems to have acquired chaos powers, and seeks to end all good and evil and bring about an age of chaos.

In AdventureQuest Worlds, he appears to the shock of everyone as he fatally wounds Alteon, destroys Sepulchure and sends his castle crashin, beginning the war on Chaos. He has masterminded the creation of his Chaos Lords, the release of the Chaos Beasts and seeks to unleash his partner, the Mother of all Monsters, onto the world. 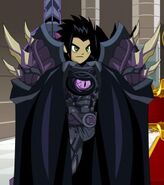 Drakath in the Drakath Strikes Back Poster

Drakath with Xing and Xang 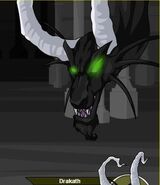 Drakath as Drakath the Darkness Dragon

Drakath as a child 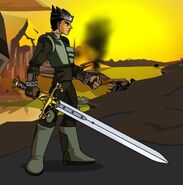 Drakath with King Alteon and Sepulchure

Drakath in front of the moon

Drakath's Character Page
Add a photo to this gallery

Retrieved from "https://villains.fandom.com/wiki/Drakath?oldid=862788"
Community content is available under CC-BY-SA unless otherwise noted.