Hobo With A Shotgun

Rule Hope Town with an Iron Fist (succeeded until their deaths).

The Drake and his sons Ivan and Slick are the main antagonists in the grind-house movie Hobo with a Shotgun.

Hobo enters the city Hope Town, where he sees all sorts of brutality and violence. The city is ran by The Drake, with his two sons Ivan and Slick. The Drake with his sons come to the city, killing The Drake's younger brother Logan, for being a "traitor". They kill him by putting a sewage grate around his head, tied one end of a noose around his neck and the other to The Drake's car before reversing at full speed, decapitating him.

The Hobo the whole time, is just trying to find a normal life, staring at a lawnmower in hopes of starting a lawn-care business. So The Hobo ends up trying raise money to buy it. However, he sees some punks abusing and attacking people, inside of The Drake's club. Inside, he finds both of the brothers, where they are torturing and killing innocent people. Both of the sons end up attacking a boy named Otis, for not giving them money in-time, so they break his arm. While Abby, a proustite tries to defend the boy, but fails.

Slick ends up getting close to murdering Abby, but the Hobo knocks him out and brings him to the police. Inside the police station, The Hobo tries to get Slick put into prison, which escalates with the police chief and the brothers attacking The Hobo, carving "HOBO" into his skin, and throwing him inside of a garbage bin. Abby ends up befriending the Hobo, and she helps him recover from the wounds.

The next day, The Hobo goes to the Filmmaker, who records homeless people fight and humiliate themselves for money. The Filmmaker pays him after telling the Hobo to chew on broken glass. He enters the store to buy it, but a group of criminals goes inside and nearly kills a woman and her baby. The Hobo gets furious from all of this, grabs a shotgun from the store and shoots all three of the criminals. After the killings, Hobo starts chasing down villains in the city such as the filmmaker, a coke lord, a pimp and finally a pedophile dressed as Santa Clause.

The news outlets start talking about the Hobo being a hero of the city, doing good deeds, and defending the innocent. Enraged, The Drake tells his sons to re-install fear into the citizens of their town. Ivan and Drake end up burning a school bus filled of innocent kids going to school with a flamethrower and then enter the television station which is covering the Hobo's vigilantism, and kills the host. Afterwards, The Drake and his sons tell the people of Hope Town if they don't want any more of their children to be murdered, they must go out and exterminate any and all homeless people they can find in hopes of killing The Hobo.

In the middle of the night, Abby is seen going home, but a police officer tries to rape her. The Hobo finds them and shoots the officer. A group of people trying to kill the Hobo are trying to find him, so Abby puts the Hobo inside of the officer's remains, and drags him away in a shopping cart and tells the mob he ran away in another direction. Otis ends up seeing the two, so he contacts The Drake's sons.

Both of the sons end up locating them inside of Abby's home. While Abby and Hobo are talking about just going away from the city, and finding a job in another place, by starting The Hobo's lawn care services and Abby taking up a teaching career. The two sons enter the apartment to try and rape Abby again and kill The Hobo. Abby's neck gets cut out with a hacksaw by Slick and nearly dies until The Hobo electrocutes Ivan's skates with a toaster to permanently scar him and then shoots Slick's groin off with his shotgun. As he lays dying in a phone booth, Slick calls his father to tell him what happened before he's dragged down to Hell in a burning school bus.

The Hobo takes Abby to a hospital where she gets medical treatment. The Drake, furious after his favorite son has been murdered, summons The Plague, two Samurai-Demon creatures which go on a hunt to capture the Hobo and bring him to The Drake. While Abby is recovering in hospital, the Plague ends up taking The Hobo to The Drake, in order to execute him.

Abby recovers, manages to get weapons, and rallies the people of Hope Town to fight back against The Drake and the corrupt police force. She confronts the Drake while holding his only living son Ivan hostage. The Drake grins and explains how Ivan just doesn't have that much potential for success anyways, and he shoots his only son. Abby then kills Grinder with her weaponized lawnmower, but is then captured by The Drake who forces her hand inside of it down to the bone, but Abby then uses her sharpened bone to repeatedly stab The Drake in the chest and frees The Hobo just before the police force arrives.

The Hobo makes his way over to The Drake, who tells The Hobo that he can never be defeated even in death because the town "worships him", but is quickly proven wrong when the angry mob turns on the officers aiming their guns at The Hobo. The Hobo tells The Drake that they're going to Hell together and then shoots his head off, martyring himself as he's shot to death by the police.

They are a crime family that rules "Scum Town" (Hope Town), and make the citizens live in fear through their shows, which involve killing people who they see as traitors and the hobos in a gruesome way. They are incredibly sadistic, with a fondness for quite brutally killing people to settle grudges or even just to send a message to someone. They have no qualms about who they kill, with even children and their own relatives dying at the hands of this maniacal family. They rule the city unopposed, as they have most of the city's police force paid off, and likely several of the town's political leaders as well. They meet their match, however, when a nameless hobo comes to town and starts bringing his own brand of justice to the streets with a shotgun.

It is never specified what criminal activities the family is involved in, although it is most likely to be drug dealing, as Slick is seen with a considerable amount of cocaine twice and giving it away as it was nothing, also their henchmen are never revealed but they are probably the punks that are seen torturing homeless people on the arcade owned by the Drake. Prostitution and possibly sexual trafficking are other criminal enterprises that the family likely runs, between the fact that they have several beautiful women by their sides much of the time, and a scene in which the Hobo kills a pair of guys (One or both of whom were likely employees of the Drake) who appeared to be in the process of selling women as slaves. The family is also aided by a contract killing team known as The Plague on capturing and/or killing enemies.

Slick is the Drake's favorite son. He is completely remorseless, extremely sadistic and colder than Ivan, being highly amused by torture and watching his victims suffer and die, but he is not as aggressive and violent like Ivan is. Slick is smarter and more ambitious than his brother, aspiring to become a crime lord like his father, making him more dangerous than his brother.

He shows hatred The Hobo for knocking him out on the citizen arrest attempt, even his father makes fun of him asking if a "school bully took your lunch money". Slick is often the leader when acting with his brother, mostly due to his higher intelligence and greater focus capability.

He is second rate to Slick in their father's eyes. Ivan is horribly sadistic, taking pleasure from pain, even his own. He is much more aggressive and violent than Slick, but he is the least threatening of the three due to not being very smart, only focusing on violence and causing pain to others instead of focusing on growing as a criminal. Due to this, he often follows his brother on whatever their duties are, often taking a perverted amusement to their games.

Despite this, he was still dangerous by himself by being more short-tempered, aggressive and violent than his brother and father. He is also shown to be trigger-happy. His father knows that he has no potential to become a crime lord, which he proves when the Drake kills his own son in cold blood, feeling him to be useless and incapable to replace Slick after his passing. Ivan is also a very skilled fighter, such as when he had a fight with the Hobo only using Ice Skates as weapons to combat him despite The Hobo using a shotgun, nearly killing him by himself. 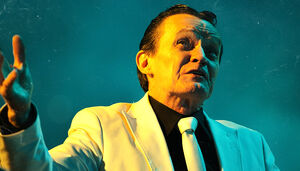 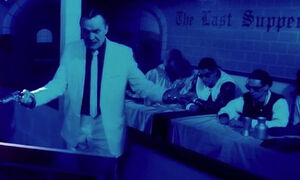 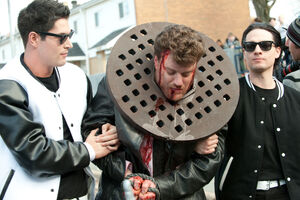 Ivan and Slick walking their uncle to his execution.

Slick after being shot in the groin by The Hobo. 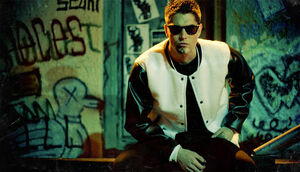 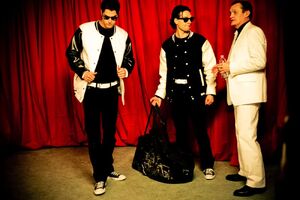 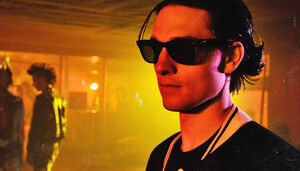 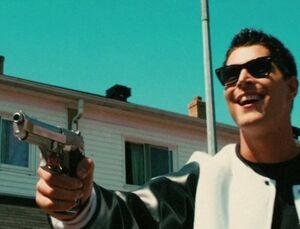