Villains Wiki
Register
Don't have an account?
Sign In
Advertisement
in: Mythology Villains, Noncorporeal, Type Dependent on Version,
and 18 more

Draugar are closer to revenant than either zombies or ghosts aspects-wise for being corpses reanimated by their own restless spirits despite blending elements of the corporeal undead and the noncorporeal undead, rose from their graves to spread plague and misery to the living: In older myth they were believed to haunt burial mounds but in more modern myths they became strongly linked with the ocean and were believed to be formed from those who drowned at sea.

Draug are very popular in fantasy media due to their links to Norse mythology and just like Trolls, they are a staple of many fantasy games and novels, often altered from their depiction in ancient tales.

It is said that those who returned as a draug are people who nasty, mean, or greedy in life. As Ármann notes, "most medieval Icelandic ghosts are evil or marginal people. If not dissatisfied or evil, they are unpopular". An indication of a corpse that will rise as a draug is being found in an upright or sitting position rather than horizontal.

A variation of draug is haugbui (from Old Norse haugr’ "howe, barrow, tumulus"), the dead body living on within its tomb. Unlike regular draug, haugbui cannot leave its grave site and only attacks those who trespass upon their territory.

Stronger than their decaying forms suggested, draugar are "generally hideous to look at", bearing a necrotic black color (said to be either hel-blár ("death-blue") or nár-fölr ("corpse-pale") to state it in shorthand), and associated a "reek of decay", or more precisely inhabited haunts that often issued foul stench.

In cases of Þráinn (Thrain) the berserker of Valland and Ásviðr (Aswitus), both possess sharp scratching claws that the hero Hrómundr to refer to the former as a sort of cat (Old Norse: kattakyn). Some draugar at times appeared skeletal as the result of much of their flesh decomposed to the point of exposing bones beneath or worse, their mortal form had since reduced into rotting parts put together by its owner's restless spirit, either of which didn't help as even draugar with least decomposing form still reeked horribly.

Even a draugr's burial mound smells as horrible as its inhabitant as noted in the case of Kárr the Old and Sóti the Viking. In fact, Hörðr Grímkelsson’s two underlings ended up dying from "gust and stink (ódaun)" of latter's mound.

As it was stated that draug are mean, nasty, or greedy person in life, majorities of them are malicious beings who either seek nothing but harm and misery of the living, tormenting those who wronged them in life, or simply haunting their burial site to prevent anyone from trespassing. The motivation of the actions of a draug was primarily jealousy and greed. The greed of a draug causes it to viciously attack any would-be grave robbers, but the draug also expresses an innate jealousy of the living, stemming from a longing for the things of the life it once had. This idea is clearly expressed in Friðþjófs saga, where a dying king declared:

This desire for the friendship experienced in life is one example of the manifestation of this aspect of the draug. Draug also exhibit an immense and nearly insatiable appetite, as shown in the encounter of Aran and Asmund, sword brothers who made an oath that if one should die, the other would sit vigil with him for three days inside the burial mound. When Aran died, Asmund brought his own possessions into the barrow: banners, armor, hawk, hound, and horse. Then Asmund set himself to wait the agreed upon three days: 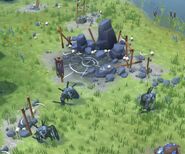