Draaaaven! (by his fans)
Good-lookin' (by himself)

Draven, also known as the Glorious Executioner, is a villainous playable character in the multiplayer online battle arena game League of Legends.

A warrior with a flair for the dramatic, Draven is a celebrity throughout all of Noxus. Having sworn to defeat any opponent who sets foot in the Reckoners Arena, Draven is ready to slice up anyone with his spinning axes to make sure his fame remains unmatched.

The 99th champion added to the game, Draven was released on June 6, 2012, and is most commonly played in the bot lane.

He is voiced by Erik Braa, who also voices Vel'Koz in the same game.

Draven grew up as an orphan in the city of Basilich alongside his older brother Darius, so from a young age the two boys had to fend for themselves. Draven excelled at getting into fights with the older children and thugs in the shady streets, fights that Darius would almost always have to get Draven out of. Darius would often scold his brother for getting into such fights, but Draven's overconfidence made it nigh impossible for him to turn down a brawl.

When the empire of Noxus invaded and conquered Basilich, Draven decided once again to start a fight with a poorly planned assassination attempt on the Noxian captain, Cyrus. Impressed with Draven's "fighting spirit", Cyrus welcomed Draven and Darius into his ranks as soldiers, a job they accepted. Darius later grew into one of the empire's finest commanders, with Draven under his command, but the rigid and undramatic structure of the military quickly made Draven bored of serving in the army.

No one knows exactly why Draven left his brother's warband, but regardless he was happy to. Draven felt his skills as a warrior were being wasted on the battlefield; he wanted a job that would bring him personal glory. For this, Draven sought out a contract at the gladiatorial Reckoning pits of Noxus. But as Draven entered the Reckoner's Arena, he realized the crowds had lost interest in the routine executions over the centuries and fell into a depressed state in the drinking halls of Noxus Prime.

But at his lowest point, Draven was found by the disgraced general, Jericho Swain, who had a plot to overthrow Boram Darkwill and restore glory to the empire. Eager to find admiration and triumph by any means necessary, Draven allied himself with Swain in hopes that the coup could help him and his brother. When the coup succeeded, Draven stood by the new Grand General's side and was tasked with executing Darkwill's allies among the noble elite.

As Draven watched the executions from the balcony of Reckoner's Arena, one man foolishly tried to escape. Draven threw his axe at the man in an exhilarating motion, something that left the crowd awestruck. As his new fans roared in approval, Draven was given the idea to make the gladiatorial pit fights of Noxus into a game of rivalry, spectacle, and glamour.

Though the games ended far less in death, they would still be filled with blood and brutality, something to keep the crowds entertained as Draven's following only grew more and more. Draven now lives the dream in Noxus as an influential celebrity and one of its most skilled warriors, even helping Darius in battle from time to time. But though his name is known across Noxus, Draven isn't finished yet. Until the entire world cheers his name, Draven will make sure the show continues.

After the awakening of Viego, the Ruined King, his corruption spread across Runeterra. Draven foolishly challenged Viego to a duel and immediately lost, becoming one of his possessed pawns (represented with the Ruined Draven skin) with no other changes but a more vicious personality than usual.

In game, Draven is a marksman-type character, dealing high damage from the back lines by throwing his spinning axes. His passive, League of Draven, helps him gain Adoration from his fans (which grants him bonus gold for kills). Draven can throw a Spinning Axe to deal bonus damage, and catch it to automatically ready the next attack. He can use Blood Rush to increase his movement and attack speed, and Stand Aside to throw his axes in front of him to knock enemies sideways and slow them. Draven ultimate, Whirling Death, throws his axes in a line in front of him before they come back.

As a self-obsessed arena master, Draven is both incredibly dramatic, headstrong, and extremely vain. Combining his own flamboyant theatrics with the brutality of the Reckoner's Arena has made Draven a celebrity in Noxus, and he's certainly going to let the fame get to his head.

While he does show a soft spot for his fans, Draven shows close to little regard for others, acting annoyed around his brother and executing his prisoners without remorse. Draven's self-centered approach to life means that he loves any and all attention he receives, leaving a picture of himself by his bedside and loving nothing more than the sound of people cheering his own name. And while this makes Draven a rather one-dimensional character, it sure makes him a dedicated one, because he enjoys what he does and won't let anyone stop him from doing it. 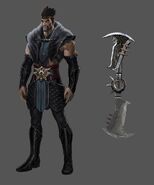 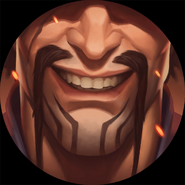 Draven as he appears in Legends of Runeterra.

Draven being possessed by the Ruined King.