High-Ranking member of the Space Pirates

Draygon is a major antagonist and boss in Super Metroid, being a huge grotesque crustacean-like creature. It is one of the four Space Pirates that Samus Aran must face in order to enter Tourian, the lair of Mother Brain. It seems to be an adult Evir, having some around it that may be its offspring.

Draygon's body is covered with a green exoskeletal shell with four legs like that of a lobster on both sides. Its mouth has teeth forming a circular maw and it has bloodshot green eyes. On top of its head are parts that look like screaming, ghastly faces. Draygon's belly is yellow and underneath the armor covering its rear is a tail with a stinger at the end.

Samus Aran battles this creature in the watery wastelands of Maridia. At first, it hides within its lair, only to suddenly appear moments later. Being a large sea dwelling beast, Draygon's weakness is both electricity and has the sweet spot on its stomach, as it has a large crustaceous shell covering every part of its body but that. Draygon attacks Samus by spitting goo, swimming at her at high speed or by grabbing her and attacking with its stinger tail. Defeating the water beast causes Evir to appear and bury Draygon into the sand. A room opens up that rewards Samus with the Space Jump ability. 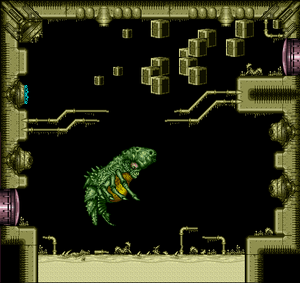 Draygon in its lair.