Cooking dishes out of human flesh.

He was portrayed by the late Jim Siedow in the first two films and Bill Moseley in Texas Chainsaw 3D, the latter of whom played Chop Top Sawyer in the second film of the Texas Chainsaw Massacre series, Luigi Largo in Repo! The Genetic Opera, and Otis B. Driftwood in House of 1,000 Corpses, The Devil's Rejects and 3 From Hell.

Drayton was the owner of the Last Chance Gas Station, he initially appears to be helpful by selling Sally Hardesty and her friends some meat but informing them of the station lacking any gasoline. He then reappears later in the film but after Sally is the only one left in her group and was being chased by Leatherface. Drayton then tricks Sally and knocks her out with a broomstick before putting her inside of his car. Later, Sally is awaken by Nubbins Sawyer who ties her up in a chair and prepares for dinner. Sally’s fingers are then cut with a knife with 5e drop dripping out being used to feed Grandpa Sawyer. After several hours of torturing her, he then instructs his two younger brother to kill Sally which then decides to let Grandpa do the job as to show the boys, their grandfather’s butchering skills. However due to Grandpa being 124 years old, he’s unable to grasp the hammer for more than a few seconds resulting in him repeatedly dropping the hammer and failing to land a single strike on her. When he does land a weak strike on her neck due to the aid of Leatherface, Nubbins then tries to do the job himself due to his impatience. However Sally then uses the distraction to escape and jump through the window. Drayton then orders his brothers to chase after her, which results in Nubbbins being ran over by a truck and Sally escaping after jumping and escaping in a pickup truck.

Drayton returns in the sequel as a more malevolent character. He’s first shown in a chili championship cook-off, winning for the second year and claiming it due to him using “prime meat”. As he drove home in his food truck, gloating and celebrating along the way, he gets a call by Chop Top Sawyer, informing him that a audio recording of the intro scene as being broadcasted. Infuriated and trying to silence anyone who knew of their responsibilities in the killing spree, Drayton orders his two younger brother to go to the radio station and to kill Stretch and LG. Later, Drayton appears in his "new house" in an abandoned amusement park inspecting the new bodies (including that of the mortally wounded LG). He then left the room to attend to other affairs. Minutes later, he noticed the damage down to his new home and orders his brothers to find the culprit. When Strech is cornered, Drayton had her knocked out and taken to dining room where he has her tied up. He then put her through several minutes of torturing, an example being him trying to have Grandpa hit Strech with a hammer. The meal however was soon interrupted by Lefty who arrived looking for revenge and was wielding three chainsaws. Realizing the threat, Drayton then tried to bribe Lefty off, only to get a chainsaw to his rear which caused him cower underneath the dinner table. After a lengthy chainsaw duel between Lefty and Leatherface, Drayton realized that all was lost and pulls out a grenade and pulls the pin. Waiting for the explosion, Drayton then monologues only to accidentally get a chainsaw in the back by Leatherface, resulting in him dropping the grenade right as it detonated, killing everyone left in the room.

Drayton was not seen nor mentioned in the third film although it’s implied that he was the one who was killed at the beginning in the execution scene.

Drayton makes a minor appearance in the 7th film of the series, it was revealed that he is the father of Leatherface. In the opening, which picks off soon after the ending of the first film, Drayton along with all the other members of the Sawyer family amassed in the house to resist the Sherrif. When the Sherrif arrived, Drayton reluctantly tries to hand over Leatherface to the Sheriff after being pressured to do so by the other family members. Drayton then goes to Leatherface and berates him for failing to kill Sally. Drayton then leaves him behind and slams the door shut when the drunken posse led by Burt Hartman arrives. After tensions rose between the two parties, a posse member threw a Molotov Cocktail into the house, setting it in fire and starting a shootout. After exchanging a few shots with the posse members, Drayton along with most of the other family members are shot and killed with the house burning to the ground. Leatherface however managed to survive the shootout due to the metal door Drayton slammed shut which protected Leatherface from the shootout and fire. 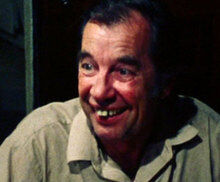 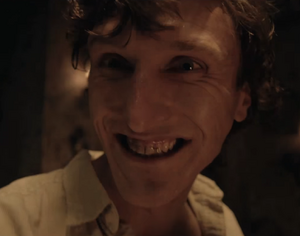 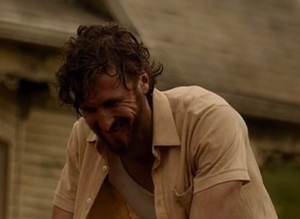 Younger Drayton with a beard in Leatherface. 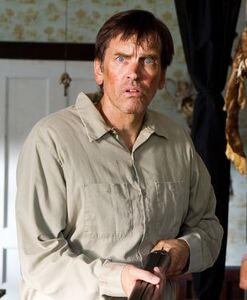