Physical strength
Commands on the Army

Lieutenant Draza is a supporting antagonist in the 2009 video game Uncharted 2: Among Thieves. He is the right-hand man of Zoran Lazarević who also acts as his army's de-facto leader in his absence.

He was portrayed and voiced by Michael Benyaer in Among Thieves, who also voiced Haras in Assassin's Creed: Revelations, and Fred Tatasciore in the multiplayer of Drake's Deception, who also voiced Carnage in Spider-Man: Shattered Dimensions, Tony Alpert in Battlefield: Hardline, and Helm Hammerhand in Middle-earth: Shadow of War.

Not much is known about Draza's past, but it appears that he might be of Serbian descent or originated from Eastern Europe. He at one point was recruited or joined Zoran Lazarević's private mercenary army, and rose to the rank of lieutenant. Draza became Lazarević's right-hand man and most loyal soldier, and helped his boss search for the Cintamani Stone.

Draza travels to Nepal with Lazarević in search for the location of Shambala, and possibly led his soldiers to fight off the local resistance. Draza was with Lazarević when they confronted Nathan Drake and Elena Fisher, a journalist who was tailing Lazarević to see if the war criminal was alive. After Lazarević killed Jeff and ordered Flynn to kill Drake and Elena, he orders Draza to follow him to the train, whom he makes the supervisor over. While commanding the soldiers on the train, he is alerted that Drake has made his way on the train.

With Nate killing many soldiers, Draza decides to take command, and sends a large mob of soldiers against the treasure hunter. Seeing that Nate is making his way, he sends a heavy weapons soldier to eliminate Drake, but the treasure hunter manages to kill the trooper. Seeing this, Draza calls for a helicopter over the radio, but it is destroyed by Nate. Tired of the treasure hunter, Draza decides to face Nathan himself, and the two began to fight in a railroad car. Draza is defeated in combat, but recovers quickly and attempts to strangle Nathan to death. However, Chloe Frazer appears and shoots Draza in the head, killing him.

Draza is the most loyal follower Lazarević, would follow any order given from the boss. Lazarević himself seems to trust Draza Giving him the Fabled Phurba dagger to keep Draza was a Silent Person rarely speaking only if he needs to often gave his actions to speak instead of his words Draza would often stand alongside with Lazarević, going wherever he will go.

Draza was a tall man around Lazarević's height with a tan skin toe and tick and very muscular body structure. Draza has a short hair and a beard both are brown in color and grey eyes Draza had Cauliflower ears suggesting he has been in various fights. 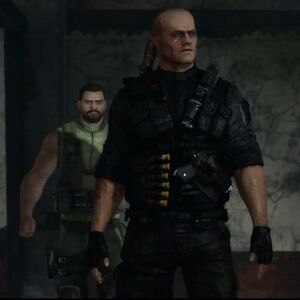