Cheat his way to first place in the Laff-a-Lympics Events (always failed).

Steal all the Treasure (Yogi Bear and the Magical Flight of the Spruce Goose; failed).

Villainous Cheater
The Dread Baron is a recurring character in Hanna Barbera cartoons and is very similar to Dick Dastardly.

In the TV series Laff-A-Lympics, there was a similar looking (and sounding) character to Dastardly named "The Dread Baron", voiced by the late John Stephenson. In fact, the similarity caused the translators in Brazil to mistake him for Dastardly (in issue #12 of the Laff-A-Lympics comic book by Marvel Comics, Dread Baron and Dastardly are twin brothers). The character's name is an obvious pun on the name of the infamous World War I fighter pilot, the Red Baron. In this series, the Dread Baron was seen wearing a World War II-era German fighter military's uniform. The Dread Baron accompanied Mumbly, a dog that was very similar to Muttley, only with gray fur, and an orange trenchcoat. Mumbly actually had his own series in which he was a detective, and in a role-reversal, Mumbly acted as the team captain of the Really Rottens in Laugh a Lympics with the Dread Baron and others serving as team members. The two later appeared in the made-for-TV movie Yogi Bear and the Magical Flight of the Spruce Goose, where the Dread Baron and Mumbly are first seen in Dick Dastardly's plane from Dastardly and Muttley in Their Flying Machines. In 2007, Dastardly makes a brief cameo as himself in a Cartoon Network commercial when - complete with a cartoon bomb - he is let into CN headquarters because he has the proper ID with him - beating out Yogi Bear, who has forgotten his ID and can't get in.

It is uncertain why Dread Baron and especially Mumbly (who was a good guy in his original series) were used in roles that were identical to Dastardly and Muttley, especially for the Yogi Bear movie. Previously, it was assumed that Dread Baron was created as a substitute because Paul Winchell was unavailable for Laff-a-Lympics, where John Stephenson provided the Baron's voice. However, Winchell was available for the Yogi Bear TV movie, yet voiced the Dread Baron, not Dastardly. It has also been speculated that Hanna-Barbera didn't completely own the rights to Dick Dastardly and Muttley and the two characters were in essence shared with another company, Heatter-Quigley Productions, who refused to allow the character names to be used in those specific programs and thus new characters had to be created.

The Dread Baron also bears some similarities to the Red Max, another character from the Wacky Races series. 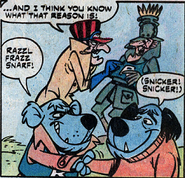 Add a photo to this gallery
Retrieved from "https://villains.fandom.com/wiki/Dread_Baron?oldid=4028657"
Community content is available under CC-BY-SA unless otherwise noted.