Kill all of the Yogi Yahooeys' Members (succeeded)

Kill all of the Scooby Doobies' Members (failed)

Dread Baron is a major antagonist in season three of Robot Chicken, appearing in the episode "Ban on the Fun".

He was voiced by Dan Milano.

Tired of always losing at the Laff-a-Lympics, Dread Baron gathers all the other members of the Really Rottens and storms the hotel the Yogi Yahooeys are staying at and proceed to gun down every single member with little resistance.

The Scooby Doobies are infuriated by this, so they assemble their team to track down Dread Baron himself, Mumbly, Daisy Mayhem, The Great Fondoo, Dinky Dalton, and Finky Dalton. One by one, every member of the Really Rottens is killed, with Dread Baron himself being blown up with a phone bomb after receiving a call from Captain Caveman.

Dread Baron has the same appearance as he did in the original Laff-a-Lympics tv show. He wears his iconic helmet, thin mustache, brown gloves, Really Rotten's Uniform with the logo, and long brown boots. 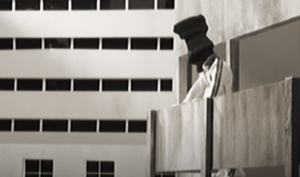 Dread Baron mimicking one of the most infamous images from the Munich massacre. 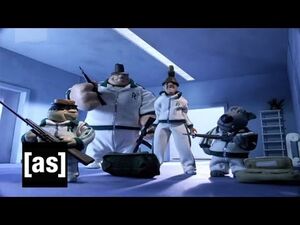