Leader of The Evil Deadpool Corps (until his death)

All the same powers/skills as the original Deadpool

Kill everyone in the Marvel multiverse. (succeeded in multiple universes)
Undo the existence of Marvel characters by killing their inspirations (temporarily succeeded, but then reversed)
Destroy all of existence (failed).

Dreadpool is the main antagonist in The Deadpool Killogy. He is a darker alternate version of Deadpool from Earth-12101 whom after being driven to madness by his own self-awarness of being a fictional character in a comic book, wants nothing more but to kill all life in existence, beliveing that doing so would free everyone from their tortured meaningless existance.

On Earth 12101, Dreadpool is first scene being wheeled into the Ravencroft Asylum by The X-Men in an attempt to cure his insanity after burning down the Smithsonian Museum. Unbeknownst to everyone however, Psycho-Man was disguised as a doctor and he attempts to mind control Deadpool into becoming his minion to try and take over the world, but in the process he unintentionally "kills" Dreadpool's inner voices and replaces them with a new and much more sinister one. Dreadpool escapes from his straight jacket and kills Psycho-Man, then under the orders of his new inner voice, he burns down the asylum with everyone inside.

After escaping the asylum, Dreadpool sets out his goals to kill all of the heroes and villains in Marvel's universe. He starts with The Fantastic Four, Spider-Man, The Avengers, and many others. Eventually he makes it to the X-Men's headquarters, killing all of the students there and even Wolverine and Professor X. Meanwhile Peter Parker's friends and relatives hire Taskmaster to hunt down and kill Deadpool, to which he agrees.

Much later into Dreadpool's murderous rampage, an all out war has broken out between Marvels Heroes and Villains, some even resorting to killing themselves as to not suffer at the hands of Dreadpool. Soon enough, Taskmaster finds Dreadpool in a swamp and the two have a sword fight until they awaken Swamp Thing who kills Taskmaster. Dreadpool tells Swamp Thing of his plans to destroy all of existence and Swamp Thing sacrifices itself so that Dreadpool can travel to "The Nexus of All Realities".

After entering the Nexus, the evil voice in Dreadpool's head tells him in order to truly destroy Marvel's alumni, they should kill what they were inspired by so that they were never created in the first place and never resurrect.

Dreadpool hops from universe to universe, killing several important characters in literature to destroy their comic inspirations, such as Moby Dick, Dracula, and many others. When he comes across Dr. Victor Frankenstein however, he manages to give his evil voice a physical form inside Frankenstein's Monster so they kill alongside each other. Meanwhile, Sherlock Holmes and Dr. Watson get a distress signal from one of Dreadpool's past victims who tells them that all of reality is at stake. They assembles a team of literary heroes in an attempt to stop Dreadpool including Hua Mulan, Beowulf, and Natty Bumppo.

When they finally catch up with Dreadpool and Frankenstein's Monster, Watson manages to shoot The Monster dead, but Beowulf and Natty die in the process. Holmes and Dreadpool get into a fight on his machine that's allowed him to travel between universe and Holmes manages to knock Dreadpool off the machine and sets it upon himself to undo all the damage Dreadpool has done so far by remembering all the stories he's ruined himself.

Back on Earth 616, the original and much less evil version of Deadpool is by himself in New York City fighting a giant robot, feeling outclassed since this would normally be a job for either the X-Men or The Avengers, but he doesn't know that they're all dead. Suddenly, he's saved by the good Deadpool Corps and they tell him about Dreadpool's plans and his own evil Deadpool Corps filled with other versions of Deadpool that also want to destroy all of reality.

Deadpool joins them in their quest to stop Dreadpool and his Corps, but every member of both sides along the way dies until it's only down to Deadpool and Dreadpool who finally meet in his headquarters. Dreadpool tries to convince Deadpool about the pointlessness of existence if there's no consequences for death and no consistency, but Deadpool reminds him that not even Dreadpool is safe from continuity and that he isn't right, only stubborn.

Suddenly, Dreadpool's wounds he hasn't been letting himself heal from fix themselves off-panel, devastating him knowing that all his work has been for nothing. Deadpool then finally kills Dreadpool by decapitating him and then pouring a universal acid onto his body so he won't heal, then Deadpool celebrates being the last version of Deadpool standing. 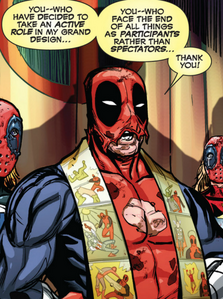