Serve the Decepticon cause

Comically Depressed Minion
Dreadwind is a minor antagonist in the Transformers franchise, especially Generation One. The original version of the character was based on a figure from the 1988 toyline.

Dreadwind first appeared in Issue #42 of the Marvel US comic, alongside perennial partner-in-crime Darkwing. The two of them travelled to Nebulos in pursuit of Scorponok's Decepticons, only to find that not only had they all moved on, but the Nebulans had poisoned the planet's fuel to prevent any further Transformer interference. However, the renegade Nebulan scientist Hi-Test sided with the pair and used a Powermaster process to transform himself into Dreadwind's binary-bonded partner, with colleague Throttle partnering Darkwing. Because of the high fuel demand, Dreadwind and Darkwing conducted a number of raids to gain food supplies for their new partners. When a group of Autobots arrived on the planet, they attempted to fight the pair. Dreadwind and Darkwing initially had the upper hand but when not only did most of the Autobots undergo the Powermaster process as well but they were led by a rebuilt Optimus Prime, the duo were soon driven off planet.

Although they were never seen among the Earth Decepticons in the main comic, the UK annual story "Dreadwing Down" saw the pair working alongside the Seacons to try and steal a power cell. The later "Prime Bomb" saw them working for Scorponok and battling the Autobot Powermasters and the Protectobots as they stole him the components needed to build a smart bomb to kill Optimus Prime.

Issues #52 and #53 revealed Dreadwind and Darkwing were now working for the Meccanibals, using Hi-Test and Throttle as a front to hide their robotic nature. When Autobot Pretenders Cloudburst and Landmine arrived on their space station, Dreadwind and Darkwing tried to ambush them but were thwarted by Sky Lynx and ended up on the run from the Meccanibals with their true nature exposed.

Dreadwind and Darkwing ended up working for Megatron and travelled to Earth to recover the remains of Starscream, succeeding despite the intervention of the Triggerbots and Starscream's corpse being reanimated by the power of the Underbase. When Megatron's prisoner Ratchet double-crossed him and used the Pretender process to revive Grimlock, Jazz and Bumblebee, Dreadwind and Darkwing ended up battling the trio alongside Megatron's other allies the Sports Car Patrol. The battle carried all of them outside Megatron's base, moments before it exploded as the result of a bomb he had intended to destroy the Ark being teleported back there.

The pair reappeared as part of the battle with Unicron and shared a moment of disillusionment at the apparently fatal damage done to Cybertron during the battle. They chose to blame the Autobots and joined Bludgeon's invasion of Klo. There, they helped track down survivors of a successful ambush of the Autobots, killing their old rival Getaway, but withdrew with the others when Optimus Prime arrived with reinforcements.

Dreadwind did not appear in the Generation 2 comic but did return in the Marvel UK annual story "Another Time and Place", as one of the Decepticons who assisted Bludgeon in his attempt to revive Megatron. Dreadwind was shot by Grimlock. 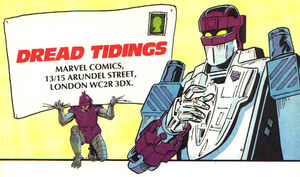