A Nightmare on Elm Street

The Dream Demons are a trio of malevolent demonic entities, vaguely resembling floating, skeletal snakes in appearance and the overarching antagonists of the A Nightmare On Elm Street franchise.

Their primary goal being breaking down the barriers between the Dream World and the real world, the Dream Demons seek out depraved humans to act as their agents in spreading chaos and horror. The Dream Demons are revealed to be the source behind the legendary serial killer Freddy Krueger's power and his ability to kill in dreams.

A Nightmare on Elm Street

Before Freddy was killed by a vigilante mob of all Springwood citizens as a human, the Dream Demons appear to him and offer him a deal involving him to become their agent in exchange for vast power and to become "forever". Freddy accepts their deal and the Demons merge with him, giving him his powers. Whenever a would-be victim defeated Freddy, the Dream Demons would resurrect him to continue his work.

When Freddy's daughter, Maggie, forcibly drags her father into the real world and blows him up with a pipe bomb the Dream Demons are violently expelled from their servant's remains.

After Freddy's death, it is assumed the Dream Demons return to him as he uses his dream manipulating powers to resurrect Jason Voorhees of Crystal Lake (disguised as Jason's mother Pamela) and send him to Elm Street to kill the children and spread the fear to allow him to return.

The Dream Demons' last notable appearance is at the end of the comic Freddy vs. Jason vs. Ash: The Nightmare Warriors, where the demons emerge from the Necronomicon Ex-Mortis - Book of the Dead - and accuse Freddy of lying to them, saying they gave him power and now they have nothing because of Freddy using the power of the book to gain reality-altering abilities. Accusing him of been 'not worthy', the trio of demons strip Freddy of both his Necronomicon abilities and his dream manipulation powers - reverting him to his original, unburnt form despite his pleas to them. Now mortal, Freddy is killed for good as Ash Williams blasts him with his shotgun - with Freddy's lifeless body been sucked into an inter-dimensional vortex created by the magic of the Necronomicon itself.

It is unbeknownst if Freddy would come back, as a time-displaced Agent Wesley Carter - who was sucked into the Necronomicon's vortex - arrived in 1964 after the police had gained the search warrant for Freddy. Finding it in front of him and remembering how it was never signed properly, signs it impulsively. Thus, history is changed as Freddy is convicted of the murders rather than been set free. 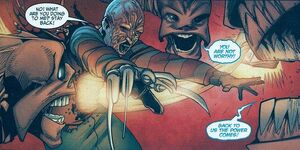