Learn everything about Traptanium to power the Golden Queen's Ultimate Weapon (succeeded).

She was voiced by Tara Platt in the game series and Parker Posey in Skylanders Academy.

Cloudcracker is not the first prison from which Dreamcatcher has escaped. She had actually escaped from Lucid Lockdown within the Realm of Dreams, before escaping from the dream realm itself. Not only can she read your mind while you're sleeping but she can bring your worst nightmares to life. Using her mischievous powers of dream-stealing, she has driven entire villages to the point of madness all for the sheer thrill of it. Her playfully evil nature is what got her noticed by the Golden Queen, who needed a good psychic for her evil schemes and also for relationship advice. Loving both cunning plans and gossip, Dreamcatcher was happy to oblige and promptly joined the Doom Raiders. Although due to her aforementioned mischievous nature, the Golden Queen has found the relationship advice questionable.

In Skylanders Academy, Dreamcatcher has a similar reputation to her mainstream counterpart in terrorizing others through their dreams for fun. Because of it, her parents sent her to Skylanders Academy in the hopes that she would be reformed.

Dreamcatcher takes the appearance of a giant floating head. She has sky blue skin and dark blue hair with a pink polka dot ribbon. In her evolved form, she has red hair and wears a yellow ribbon with green stars.

Dreamcatcher is a mischievous and cruel sadist who enjoys driving others insane with her dream manipulation, though when confronted she will make petty excuses for her cruel behavior. She has the attitude of a stereotypical teenage girl, occasionally speaking with text phrases such as "OMG" and "TTYL". She is also bothered by people who actually enjoy her nightmares and reacts with more violent pranks to enjoy messing with them to turn the table against them.

In TV Series Skylanders Academy, Dreamcatcher's personality is basically the same as she established to be already a sadist, to begin with simply because being a good citizen is boring. This concerned her parents that they sent her to the titular academy to be reformed.

True to her name, Dreamcatcher possesses potent psychic powers which allowed her to manipulate other people's dreams: By feeding on others' dreams, she can gained her victims' secrets and performed other feats such as teleportation, conjuring a durable force field, bring dreams and nightmares to life, healing herself from injuries, let the dreams of individuals run amok, altering her own size, and warp reality. Dreamcatcher is also capable to conjure tornadoes (the said tornadoes occasionally pulling sheep from people's dreams due to that ability related to her dream manipulating abilities) and made others fall asleep by summoning mechanical claws with her Dream Drain and can form her Dreamquake, which is a stormy cyclone with destructive lightning.

Aside from performing dream walking and manipulating dreams of others, Dreamcatcher's psychic powers allowed her to sense the current conditions of her allies, as she was able to report the defeat and capture of the Chompy Mage and Chef Pepper Jack at the hands of the Skylanders.

She first appears in the episode, Dream Girls, where she appears as a Skylander in a group of cadets, watching Stealth Elf train in front of them. They were amazed at her abilities, except for Dreamcatcher who was sleeping the entire time. Later in the episode, the Skylanders became afraid of sheep after witnessing them in their dreams, so Stealth Elf (whom yet to be affected) sought to find out why by asking her fellow Skylanders cadets with no luck.

After discovering that she was too focused on her investigation that made her forgot to sleep and her friends' fear on sheep might have something to do with nightmares about them, Stealth Elf then goes to sleep, and predictably, she had a nightmare where a huge sheep tormented her. However, Stealth Elf, who predicted that this would happen, resists and discovered it was Dreamcatcher who tampered everyone's dreams to the point where they afraid of sheep. A battle ensues, where at first Dreamcatcher had better advantages thanks with her dream manipulation powers, but Stealth Elf, whom realizing how Dreamcatcher's powers worked and she realized that she had better control over her dreams than Dreamcatcher, she managed to defeat her by turned her dreams against the dream manipulator.

Not long afterward, Stealth Elf, who awakened from her dream duel with Dreamcatcher om the next day, caught her opponent floating beside her, revealed that she snuck into her room to tamper her dream. The heroine quickly restrained her and exposed her deeds to her fellow cadets. As punishment for the chaos she caused to the academy, Dreamcatcher was sent to a prison called Cloudcracker to await her trials.

Upon her arrival at Cloudcracker prison as seen in the episode The Hole Truth, Dreamcatcher met Doom Raider and their leader Golden Queen for the first time. She at first ridiculed the team until Golden Queen proposed her to join them. Interested in her proposal, she joined the team and they instigate the plan to escape the prison. 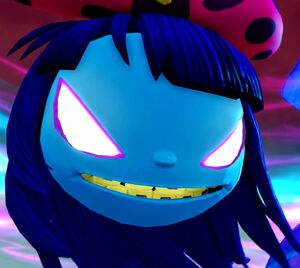 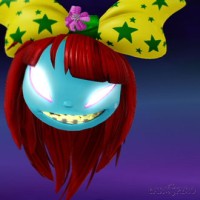 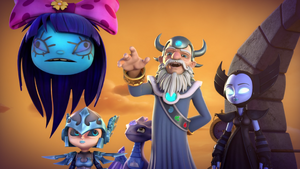 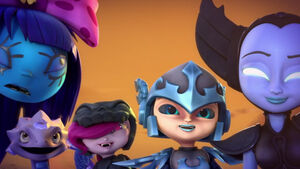 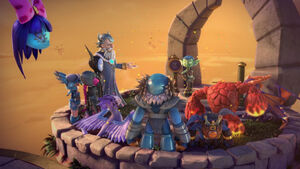 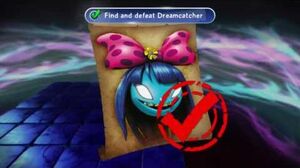