Escape from the scientists (failed).

Have sex with Gavin.
Kill the scientists boss.
Kill Gavin and his brother
Have sex with Elsa (all succeeded).

Dren is the main antagonist of the 2009 sci-fi horror film Splice.

She was portrayed by Delphine Chanéac.

Two generic engineers, which are a couple Clive Nicoli and Elsa Kast have a goal of making human-animal hybrids in order to use them in medicine. The two made two big-fat creatures known as Fred and Ginger, which started to mate with each other. After they managed to make them mate, the couple moved onto creating a revolutionary hybrid. Their employers disagree with their idea, and tell them to keep focusing on Fred and Ginger. The couple however keeps working on making the hybrid, and they end up making a female creature. Clive wanted to kill the creature, but Elsa managed to force Clive in letting the creature live. The hybrid also ages much faster but mentally it's developed like a child. The hybrid ended up spelling NERD with toys, Elsa ended up calling the hybrid "Dren".

Clive's brother ends up seeing Dren but Dren ends up jumping on him. But Dren starts having a fever, and the couple put her in cold water. Clive ends up trying to kill Dren by drowning her, instead Dren started to use it's gills and rest inside of the water. The whole time the couple has been experimenting with Dren, forgetting about Fred and Ginger. At a presentation, the couple presented Fred and Ginger. Inside of a box, Fred and Ginger were next to each other, they were supposed to mate, but it escalated in Fred and Ginger getting into a fight, killing each other. Because Ginger transformed into a male, and Elsa and Clive did not see it coming, because of work with Dren.

Elsa and Clive end up moving Dren inside of a old-isolated farm where Elsa used to grow up. At the farm, Dren ends up revealing that she got carnivorous tendencies, wings and ends up getting inside of adolescence. Dren ends up being bored all the time being locked at the farm, because the couple fears of people discovering her outside. Clive ends up finding out that a unknown donor did not donate it's DNA for experimentation, instead Elsa used her own DNA. Dren ends up misbehaving, killing a cat, and trying to kill Elsa, and Elsa ends up amputating her stinger. Elsa goes to her work to synthetize a protein, while at the farm, Clive and Dren end up having sex. Elsa sees the two having sex and gets sick. Clive goes back into Elsas house and they end up deciding to kill Dren but they end up finding Dren dying.

In the end of the film, the other employer gives a lot of money to Elsa, in order for Elsa to keep her pregnancy with Dren on-going, and she agrees, taking Dren's baby.

When she was born, Dren looked like a deformed creature with no hands but as she matured she started to look more human. As an "adult", she looked like a deformed human with no hair. She has a tail with a tip like a scorpion, webbed feet, mostly black eyes and only four fingers (counting the thumb). Later in the film, it is shown she can produce twisted butterfly-like wings. She has aquatic lungs and needs to be underwater every once in a while. When she became a male she looked a little more disfigured.

Dren could not speak but instead made bird-like noises (screeching, cooing, etc.), except at the end of the film when she/he said "Inside you." as she/he was raping Elsa. 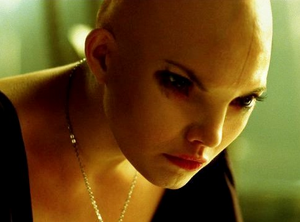 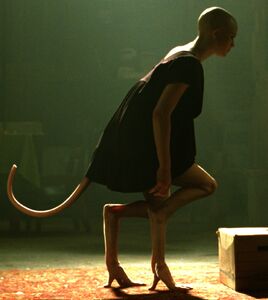 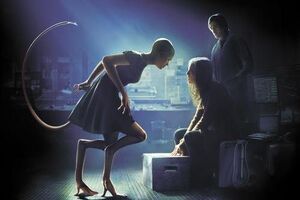 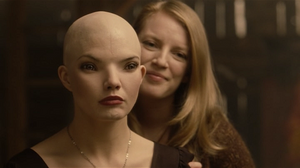 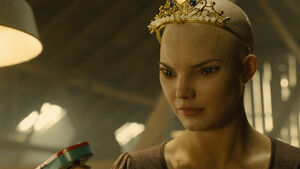 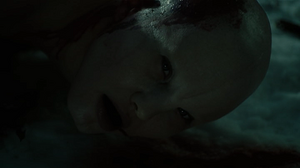 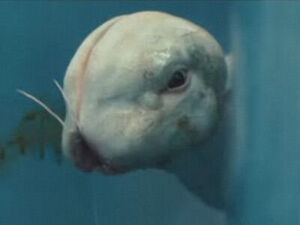 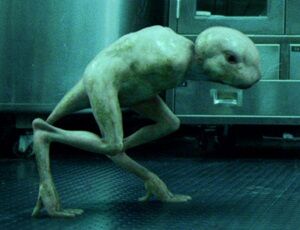 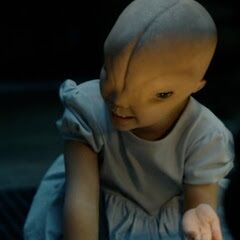 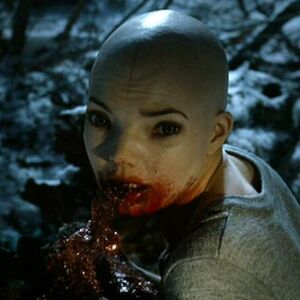 Add a photo to this gallery
Retrieved from "https://villains.fandom.com/wiki/Dren_(Splice)?oldid=4094541"
Community content is available under CC-BY-SA unless otherwise noted.