High pain tolerance, Intelligence, and Strength
Time travel (with the Time Portal and Time Ray at his disposal)

Antagonizing and fighting both Captain Man and Kid Danger.

Drex or Captain Drex is the former sidekick of Ray Manchester/Captain Man, before Henry Hart/Kid Danger, who turned to a life of crime, and the overall main antagonist in the TV show Henry Danger. He a bigger threat the heroes have ever faced; more so than either The Toddler, Dr. Minyak, the Time Jerker, Barge (who is the most strongest and the most durable villain), Frankini, and even Rick Twitler himself. This headstrong supervillain is Captain Man most dangerous and worst enemy as well as Henry Hart/Kid Danger's archenemy. Drex has also proven to surpass all the other dangerous villains the heroes have faced and the only villain who ever succeeded in their goals

He was portrayed by Tommy Walker.

Drex was Ray Manchester's/Captain Man's original sidekick, working with him for a few months, 9 years before Henry Danger takes place; however, Ray said he never saw much action out on the field or let him fight crime despite the fact he was his sidekick. Whether "Drex" is his real name or a secret identity is unknown. He seems to be an expert at setting up booby traps.

He has blond hair, and wears a blue headband with a knot behind his head. He also wears either a ragged yellow-gold or dark blue vest with what appears to be street gang clothes.

When Drex became a criminal, because of his extensive training under Captain Man's wing, he was too powerful for even the Captain himself to stop him. But somehow, he was defeated and soon arrested by the Federal Bureau of Investigation (FBI) before spending time in prison until many years later.

He also hopes to surpass and replace his mentor for his own goals, going as far as denying him the day he received his powers and Drex getting them instead. He has ultimately proven that he seeks to erase Ray/Captain Man from existence and wipe the memory of Swellview's citizens from ever knowing their true savior.

He was the sidekick of Captain Man about 9 years before he became a criminal. Ray stated he didn't let Drex fight crime despite the fact he was his sidekick. Captain Man even states that Drex could have killed him if he was never indestructible. Later Drex was arrested and put in prison.

It was Bring Your Daughter To Work Day at Swellview prison, and one girl accidentally released Drex and blamed on her age and that she didn't know any better. Drex meets Henry (Kid Danger) and Ray (Captain Man) in Schneider's Bakery where he beats up two criminals, traps Ray in an unbreakable helmet and his hand in a wooden box and humiliates Kid Danger by spanking him and singing a song that parodies "Oh Da Doo Dah Day". Later he comes to Junk and Stuff to find where the Man Cave is and Jasper tricks him into taking him to the playground. Fortunately, Kid Danger is able to defeat Drex with his new superpower (super fast reflexes) before Jasper gets hurt, and humiliates Drex the way Drex humiliated him at the bakery. Schwoz blasts Drex with a beam that leaves him braindead, and he is brought to the Man Cave where Henry is on the news spanking Drex. The episode concludes with Captain Man, Henry, Jasper, Charlotte and Schwoz singing around Drex.

While still being contained in a storage room for the past year. Drex escapes the containment unit when Vice Mayor Willard announces a 10-second power outage. Jasper shot silly string at Drex, who escapes and crushes the can with his hand. Drex traps Jasper in duct tape, and uses the Time Jerker's Time Portal to go back in time to stop Captain Man from becoming indestructible, and sets one of the blasters on a timer he stole and point it at the portal to self-destruct. Henry and Ray go down to the storage room, and try to stop Drex. However, Drex jumps through the time machine. Henry and Ray follow him through the machine, as a gun that Drex had set up fires at the time machine, destroying it.

The heroes see Drex nearby buying a snow cone, and they are about to apprehend him, but they're stopped by security. Henry and Ray bring the officers behind bushes and knock them out, but when they return, they see that Drex has left to Glass Tech.

Drex dresses as a scientist and stops Ray from becoming indestructible at age 8. Drex used the Densitizer to become indestructible. It works, however the side effect turned his right hand into a monster hand. After defeating Henry and the now destructible Ray. Drex destroys the Densitizer with the blue laser gun he stole, and attempts to destroy Ray and Henry, but the heroes are brought back through time and Schwoz tells them that as long the time portal is activated, the changes made in the past or future will not affect the present. Captain Man and Kid Danger (who are 20 minutes older) travel back to before Drex became indestructible, but they were too late. They warn themselves to save Carl and everyone in the building. Drex becomes confused at this ordeal but his goal is the same. They succeeded in making Ray a superhero again. Captain Man and Kid Danger are sent back to the Man Cave, where Drex is trapped in a time prison. To make sure he will never be seen again, Captain Man and Kid Danger sends Drex 100 million years into the past, getting him out of their hair once and for all.

Due to the heroes changing the timeline, Drex survives from the Cretaceous period well into the Ice Age, where he becomes frozen and discovered years later by S. Thompson on cold Mount Swellview.

S. Thompson was showing Mrs. Shapen where Drex was but he escaped and scared them off.

At Swellview Mountain, he meets Bigfoot, who was using his hair dryer to defrosting a caveman. Since Drex had been using Bigfoot's electric generator, so Bigfoot lets Drex know that. However, Drex reacts by making a threatening gesture that he was going to hit him. Bigfoot does not fear him and even mocks him, but when a group of cavemen appear unexpectedly, he decides to just leave the place.

Fran meets Drex in a bathroom at the Nacho Ball, he was with two cavemen finishing up his look. Fran tells Drex that she was in a hurry to use the bathroom, so Drex and the cavemen leave.

The Beginning of the End

Making his striking comeback, the former sidekick turned villain had surprised Captain Man by setting up a trap in the Man Cave, leaving him tangled in a vine and knocking out Schwoz and Bose with his stun laser he quickly stole from Ray belt after capturing them.

Drex has tied up Captain Man, Bose, and Schwoz in the Man Cave. They ask how he was able to arrive in the present-day after they sent him 100 million years in the past. Drex explains that he had frozen himself and waited until climate change thawed him out. He had an army of cavemen that he had trained to hate Captain Man and Kid Danger by blaming every bad thing that happened on them. Schwoz accidentally blurb out that Drex can send Ray 100 million years into the past just like he and Henry did to him, causing Drex to think of ways to get revenge on them.

At the Man Cave, Drex is trying to think of ways to get his revenge on Captain Man. He then gets the memory wiper and challenges Schwoz to modify it so that it would work on everyone in Swellview. Offended, Schwoz accepts the challenge. Kid Danger arrives in his uniform and easily takes out Drex Cavemen. Drex zaps Kid Danger with a laser gun, and he falls to the ground, and Drex orders the cavemen to sit on him.

Schwoz comes out with the upgraded and new memory device capable of wiping the memories of everyone in Swellview. Schwoz then accidentally reveals that the memory wiper would only work if it were attached to aircraft, like a plane or a helicopter. Schwoz refuse to help Drex further until he took Bose as a hostage. Drex explains his plan: he would erase everyone’s memories of Captain Man in Swellview so that no one would remember who he was. Then, Drex would take a gumball and become the new Captain Man, tarnishing everyone’s impression of who he is. Drex takes the Time Ray and zaps Captain Man back in time 101 million years ago. Drex then takes Bose and Schwoz as hostage so that Schwoz can help him operate the Memory Wiper.

Drex is at Planes-a-Plenty, trying to get a flying vehicle that can get him into the sky. However, the employee there says they don’t have any planes since it was planes graduation they were all in the sky, but they have a blimp, and they needed to wait for the blimp to be inflated, much to Schwoz and Bose's amusement and Drex's disappointment. Sleeping for hours as they waited for the blimp to be inflated, the employee notified Drex his blimp was ready to board. Miles, Mika, and Chapa decide to go to Planes-a-Plenty to try and stop Drex from executing his evil plan but all four of them were easily defeated.

Kid Danger and Captain Man go after Drex by paragliding toward his blimp. They land on top and begin to fight Drex. Captain Man realizes that the fight on the blimp is his perfect fight with him fighting with him and Dwyane fighting the Bad Guy. As they take down Drex, Henry knock the Memory Wiper off the blimp destroying it as it fall down a thousand feet. Miles then appears, with one of his cavemen, as he discover he can teleport. This distract them allowing him to knock Kid Danger nearly off and allowed him to gained the upper hand against Captain Man. Drex throws Captain Man off of the blimp. Kid Danger then tackles Drex, but was easily beaten. Before Drex threw Henry off Captain Man soon arrives back onto the drone, having caught the drone Jasper sent up. Captain Man throws Drex off the blimp, as he struggles to grab on using his claw-hand and tears a hole in it, before falling down a thousand feet. However Jasper caught Drex with the drone and sent him straight to jail before he could hit the ground. 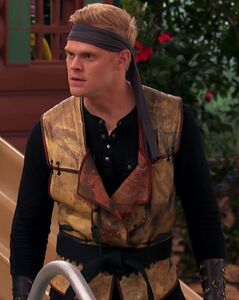 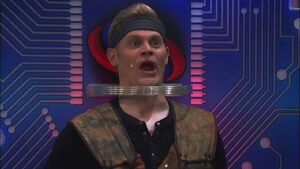 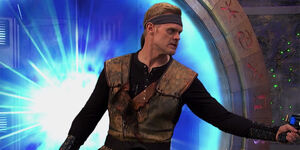 Drex before he escape. 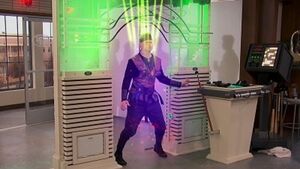 Drex becoming indestructible and getting a monster claw 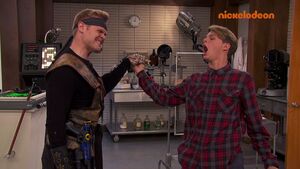 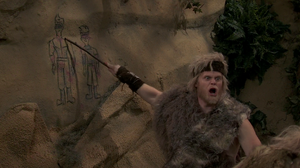 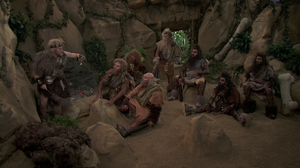 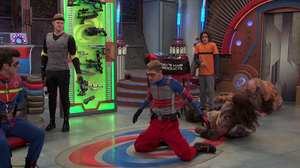 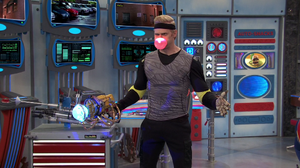 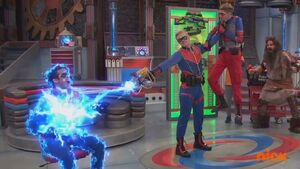 Drex sending Ray 101 million years into the past. 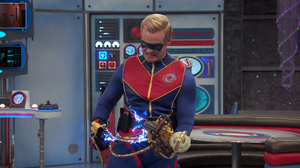 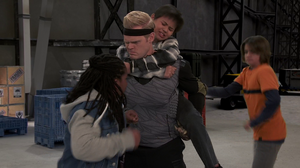 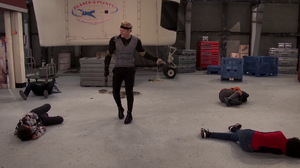 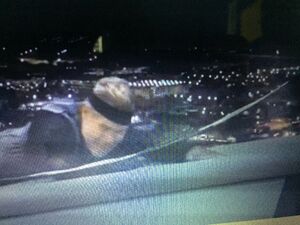 Drex's final defeat.
Add a photo to this gallery

Retrieved from "https://villains.fandom.com/wiki/Drex_(Henry_Danger)?oldid=3759098"
Community content is available under CC-BY-SA unless otherwise noted.