Villains Wiki
Register
Don't have an account?
Sign In
Advertisement
in: Leader, Live Action Villains, Planet of the Apes Villains,
and 41 more

Dawn of the Planet of the Apes

Save the human race from extinction by eradicating the apes.

Avenge the deaths of his family (both failed).

Dreyfus is the anti-villainous secondary antagonist of Dawn of the Planet of the Apes, and a posthumous antagonist in it's sequel War for the Planet of the Apes. Dreyfus was a former police officer, the co-founder of a small community of humans in San Francisco who genetically survived the Simian Flu outbreak, and leader of the Human Resistance. Although not necessarily evil by any means, he was more than willing to take extremist measures in order to save and protect humanity.

He was portrayed by Gary Oldman, who also portrayed Count Dracula in Bram Stoker's Dracula, Drexl Spivey in True Romance, Norman Stansfield in Léon: The Professional, Egor Korshunov in Air Force One, Jean-Baptiste Emanuel Zorg in The Fifth Element, Carnegie in The Book of Eli, Dr. Zachary Smith in Lost in Space, Mason Verger in Hannibal, Vladislav Dukhovich in The Hitman's Bodyguard, Lord Shen in Kung Fu Panda 2, Ruber in Quest for Camelot, Daniel Clarke in Call of Duty: Black Ops, and General Grawl in Planet 51.

Dreyfus was a former police chief who co-founded a small community in San Francisco with a man named Malcolm after the tumultuous Simian Flu outbreak ran its course. He was also appointed as the leader of the human resistance and ended up experiencing personal losses - as his wife and two sons died during the Simian Flu outbreak.

Dreyfus was first seen talking to Malcolm and of his group relaying information about the ape tribe, including their ability to speak. Dreyfus was reluctant to believe their report, despite the insistence of both Malcolm and Carver otherwise.

Dreyfus witnessed Caesar and his colony arrive and tries to stop Malcolm from approaching them. He was then shocked to see Malcolm's group were telling the truth about the apes talking as Caesar spoke to the humans and threatened them with war if they trespassed into ape territory again. After this, Dreyfus calmed his people by telling them that the apes will not come back and tells them he has a plan to restore power to the city and search for other survivors.

Talking with Malcolm, Dreyfus explains that now he has discovered the ape encampment at a local power station. Seeing no other solution, Dreyfus has one goal: wipe them out. However, Malcolm tells his associate, they can't afford a war since they have lost so much already and tells him he to give him three days to talk with Caesar.

Dreyfus is hesitate but complies though he tells Malcolm if he is not back in that time, he will get some of the other survivors and get weapons and they will go to the Apes' home and slaughter all of them.

Battle with the Apes

Later, Dreyfus and the survivors celebrate having the power restored and he happily looks at a tablet which holds a picture of his deceased family. He soon preps his personal militia for battle when the apes, led by Caesar's treacherous usurper Koba, launch a gun-wielding assault on the human colony - as Koba strived to wipe out humanity in retribution for their mistreatment towards him in the past and thus opposing Caesar's hopes of seeking peace between the two colonies.

At first, Dreyfus was able to dispatch many apes, but soon sees that he had underestimated the apes' capabilities as they kill many of his men before ultimately breaking through the human's defense; Dreyfus could only watch in horror as he witnessed the apes terrorize his people to the point where many of them would later be killed or imprisoned. Unable to do anything, Dreyfus escaped the area along with his closest men as the apes took over the city.

Near the climax, Dreyfus encountered Malcolm in an abandoned underground bunker. When Malcolm discovered that Dreyfus has set up a bomb ready to be detonated, he then threatens Dreyfus and his two men with a rifle and ordered him to deactivate the bomb. Malcolm then attempts to explain Koba's plot against Caesar and that Koba himself tricked the apes into attacking the human colonies, but Dreyfus angrily refused to believe this, believing that the apes are all guilty. He revealed to Malcolm that he and his men have made contact with a military base up north and they wee already on their way to help them fight the apes.

Unable to come to terms with Malcom's decision and believing that there is no way the ape and human colonies can ever make peace with each other, Dreyfus refused to surrender and instead decides to willfully sacrifice himself and his two men with the bomb detonator - in his own hopes for the survival of humanity's existence and the extinction of the ape colony.

Despite Dreyfus' efforts, Malcolm managed to escape and survive the explosion. Caesar and many of his apes also survive the bomb and the fall of the tower; Koba survived as well, but ends up getting killed by Caesar as a result of how the his genocidal aspirations effectively broke the apes' potential of earning peace with humanity. 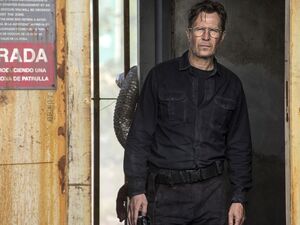 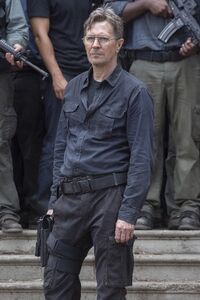