Possesses the ability to travel inside dreams and create hallucinations

Kill everyone that is associated with Courtney Bates and drive her insane.

The Driller Killer is the chief antagonist of the comedy-horror film The Slumber Party Massacre II.

He was portrayed by Atanas Ilitch.

After Courtney Bates and her sister named Valerie Bates killed Russ Thorn in The Slumber Party Massacre, Valerie went insane and was committed to a mental institution.

At the start of the film, Courtney Bates, now grown up and in her own rock-band, is plagued by bizarre and musical nightmares involving The Driller Killer. She at first mistakes it as trauma from her past experiences with Russ Thorn, but as the film goes on, her dreams slowly become one with reality.

Courtney and her band decide to go to a recently purchased condominium that one of the band members' parents purchased. During this weekend stay, Courtney is plagued by vividly bizarre hallucinations that include a raw chicken leaping from the fridge and attacking her, a severed hand replacing her hamburger, a literal bloodbath, and her friend's face turning into a giant zit and exploding.

Her friends and boyfriend become increasingly concerned for her mental health, but all of their concern quickly becomes a fight for survival when The Driller Killer finally materializes and starts to take the gang of kids out one-by-one.

He eventually kills all of them, but Courtney, and chases her into a construction site next door to the condominium. Courtney then fashions herself a flamethrower and sets The Driller Killer on fire, seemingly killing him.

However, at the very end when Courtney sees her friends' bodies being carried away, one of them sits up and starts laughing. Courtney then wakes up to reveal it was all a dream, only to have her boyfriend sleeping beside her be The Driller Killer. Then it is revealed she is in a mental asylum and screaming as the Driller Killer's electric guitar drill can be seen bursting through her cell room floor.

Most of The Driller Killer's dialogue is nothing but puns from classic rock songs including: 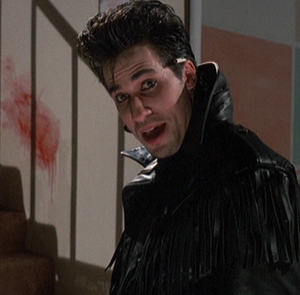 Retrieved from "https://villains.fandom.com/wiki/Driller_Killer?oldid=3889081"
Community content is available under CC-BY-SA unless otherwise noted.