Defeat the Digidestined (while being brainwashed).

To escape from the Data Squad in Digimon Data Squad (succeeded briefly).

Drimogemon is a minor antagonist in the Digimon franchise, specifically the animated TV series Digimon Adventures 01, 02, Digimon Data Squad, and the manga version of Digimon Fusion.

Drimogemon is a Champion Level Digimon that resembles a giant mole with purple and white fur, a drill for its nose, and also mini drills for its claws.

Drimogemon spends most of his time underground and rarely fights. Rather than attacking, he is a coward, and often tries many attempts to run away.

While the DigiDestined were looking for the Tags, they were attacked by a Drimogemon with a black gear on his back. It took the power of Ikkakumon and Kabuterimon to destroy the Black Gear. Before he drilled away he told the DigiDestined where the Tags were.

While the Digimon Emperor was ruling the Digital World, a Drimogemon was under the control of the Dark Ring. He and Digmon fiought each other until Digmon used his Gold Rush and destroyed the Dark Ring.

Drimogemon first appeared from a Digi-Gate, and helped two robbers escape from prison and help rob money with them. When the DATS team arrived on the scene, Drimogemon and the robbers try to flee, but Marcus and Agumon held them back by stopping them in their vehicle, preventing them from escaping. Drimogemon grew bigger and destroyed the robbers vehicle. Gaomon and Drimogemon engage in a fight, while Thomas plans to drive the mole into the water. But Marcus and Agumon ambush Drimogemon from the water, ruining Thomas’s plan, foolishly making it harder and Drimogemon cowardly digs away. Thomas Digivolves Gaomon into Gaogamon to get to Area F immediately. They cornered Drimogemon, who just came out of a tunnel he created. Gaogamon attacks Drimogemon, but retreats back into the tunnel, only to be punched out of the tunnel by Marcus, for he and Agumon secretly followed the mole. During the battle, a digital gate unexpectedly opened and the two Digimon tried to destroy Drimogemon, but the two attacks canceled each other out, allowing Drimogemon to escape back to the Digital World. Fumed at Marcus for interfering with his mission, Thomas refuses to be on a team with Marcus. Back at DATS, Commander Sampson scolds Thomas for not working together. To set things right, Thomas requests a Digital Dive, but Sampson refuses and tells Thomas to accept his failure.

Later on at night, Thomas sneaks into the DATS headquarters during Yoshi’s night shift at the headquarters and activated the Digital Dive to go to the Digital World (despite disobeying Commander Sampson's orders) to fight Drimogemon once again. Marcus and Agumon also force Yoshi to make them go to the Digital World to join the fight too. Drimogemon then spotted Agumon and Marcus and trapped them into a maze. When Thomas and Marcus made up, they were finding a way out of the maze, they saw Drimogemon and Marcus hatched a plan to get on Drimogemon's back and control him by grabbing on to his fur. Then suddenly Marcus and the others got free from the underground path and led them to a crystal stadium, where Drimogemon can't escape underground. When the DATS begin to attack him, he digivolved into Digmon to attack. Then Marcus and Thomas had a plan for GeoGreymon and Gaogamon to combine their attacks, reverting Drimogemon as Digmon back into a Digi-egg. After Drimogemon was defeated, Marcus and Thomas became friends.

Beast type Digimon with an enormous drill to his nose. While digging in the ground, he moves at high speeds, when he dives into the ground, he is not easily encountered. He is placid and has a shy nature, he occasionally steals bones in the ground that was hidden by Garurumon and uses them as weapons. 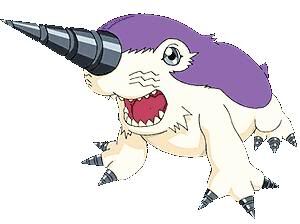 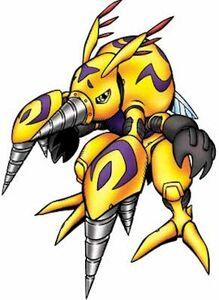