Tom and Jerry: The Lost Dragon

Get revenge from elves from exelite her

Drizelda is the main antagonist of Tom and Jerry: The Lost Dragon.

She was voiced by Vicki Lewis in her first villainous role.

At the start of the story, Drizelda is banished from her village by the mighty wizard Kaldorf for using dark magic and for her ill treatment of her niece, Athena, who chooses to stay with Kaldorf. Drizelda attempts to cast a spell on Athena and Kaldorf, but her dark magic backfires and she's catapulted to a volcano, but not before vowing revenge.

Years later, Drizelda sends her three hench-cats, Tip, Pan, and Alley to steal a dragon's egg she craves. Unfortunately, they are chased away by a dragon and the egg tumbles into a river. After they spread the news, Drizelda is furious that they lost the egg. She turns Tin, Pan, and Alley into bat creatures and sends them to find it. Tin, Pan, and Alley attempt to capture the baby dragon, Puffy, who has hatched from the egg, but Tom and Jerry save the hatchling.

After Athena ventures into town to find the trio, Drizelda arrives. Drizelda reveals that there is a dragon in the village and that Puffy's mother is looking for him. Using dark magic, she kidnaps Puffy and takes him to her lair. Drizelda attempts to force Puffy to give her his fire to cultivate the power in her magic necklace. Puffy refuses, so her cats use pepper to make him sneeze. Drizelda absorbs the fire, turning Puffy to stone and transforming into a dragon. Athena, Tom and Jerry arrive at Drizelda's lair and are attacked by Puffy's mother, whom they convince that they were looking after him. Meanwhile, Drizelda launches an attack on the village and wins a fight against Kaldorf.

Before Drizelda can devour Kaldorf, Puffy's mother, Athena, Tom and Jerry fly to the rescue. Drizelda and the mother dragon engage in a huge fight, but Drizelda uses her magic necklace to turn the latter into a statue. Kaldorf tells Athena and her friends that the necklace, the source of Drizelda's power, is to be destroyed. Tom, Jerry, and Athena's animals overpower Drizelda before Athena, with Tom and Jerry's help, destroy the necklace with a mallet. While Puffy and his mother are freed from Drizelda's spell, Drizelda's magic backfires, turning her into a statue.

In a post-credits scene, a bird flies onto Drizelda and she shoos it away with a puff of smoke. 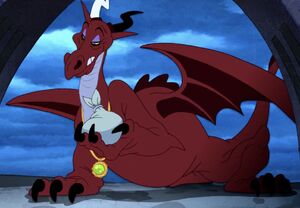 Retrieved from "https://villains.fandom.com/wiki/Drizelda?oldid=4311277"
Community content is available under CC-BY-SA unless otherwise noted.