Drizella Tremaine (Once Upon a Time)

Drizella Tremaine is the central antagonist of the Season 7 of ABC's Once Upon a Time, serving as the main antagonist of its first half.

Drizella is the daughter of Rapunzel Tremaine, the sister of Anastasia Tremaine and the stepsister of Cinderella. Drizella is responsible for casting the Dark Curse, which lands her and several other Enchanted Forest residents in Seattle. In Hyperion Heights, she lives as "Ivy Belfrey", the assistant to her mother, now known as "Victoria Belfrey".

She is portrayed by Adelaide Kane.

Similarly to Zelena, Drizella has revealed that she was born with natural magical powers, yet her mother has always forbidden her to even manifest them and learn them to control. But when Regina finally offers her help and begins to teach to the young Tremaine the most basic forms of witchcraft, Drizella shows a speed of learning frighteningly accelerated.

Until now Drizella has shown she has some telekinetic ability, the power to magically immobilize her targets and the ability to teleport with a purple smoke. However, she also demonstrated that she could create with her palms a form of shield or invisible blast (which she used to prevent debris from falling over Regina's head by destroying them) and an ability to manipulate plants (manipulating, like a tentacle species, the root of a flower to kill her boyfriend). When her mother confronts her and Gothel, Drizella demonstrates the ability to put Rapunzel to sleep with a wave of her hand.

As master of the new Dark Curse, she is able to dictate all the rules and manipulate the memories of everyone in the Enchanted Forest before being sent to Hyperion Heights (which she presumably designed indirectly) - for example, she changes Rapunzel's memories to make her believe that she cast the Curse to save Anastasia and that she and Gothel are the only ones awake when in truth Rapunzel is not truly awake.

In the present day, Drizella has seemingly lost her magic to Anastasia through Gothel's bracelets, and in order to regain her powers she must conduct another exchange of magic with her sister to succeed.

As a child, Drizella was cheerful and innocent. She had a close relationship with her sister Anastasia and even her stepsister Ella. She even gave Anastasia the idea to release lanterns into the sky so they can guide their mother Rapunzel back home, showing her kindness and optimism.

After losing her father, her stepmother, and her sister, as well as having her returned mother become more abusive of her and her stepsister, Drizella's life fell apart utterly. Far from the nice girl she originally was a child, Drizella was broken and pessimistic, blindly following her mother's orders. After discovering her mother intended to sacrifice her to use her heart to revive Anastasia, Drizella became evil and no longer cared about others, not even Anastasia. She became determined to make her mother suffer, and even casted the Dark Curse with the help of Gothel and the Coven of the Eight to do so, with the heroes unable to stop her. She still retained a bit of kindness though, offering Gretel friendship before the latter attempted to kill her.

After Victoria sacrificed her life to save Ivy, however, Ivy had a change of heart. She seeks support from Henry, has a heart-to-heart talk with Jacinda, and expresses her desire to save Anastasia from Eloise. She also embraces her old doll that Jacinda returns her, showing her more endearing side. After making amends with Anastasia, a fully redeemed Ivy returns to the New Enchanted Forest with her. 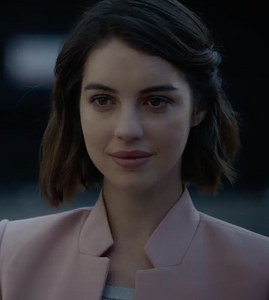