Standing up against the Jedi

Helping the Trade Federation in their goals.

Robotic Minions
Droidekas, also called the destroyer droids or wheel droids, was a type of heavy battle droid used by the Trade Federation and the Confederacy of Independent Systems. It gained a reputation for deadliness over the course of the Clone Wars. Droid commanders such as General Grievous favored the droideka for its resilience and firepower, as well as the fear it could instill in even the most powerful Jedi.

They were deployed in many battles over the course of the Clone Wars, such as Muunilinst, usually in moderate numbers due to their cost, and were also used as guards in various Confederate installations. After the Clone Wars, remaining droidekas would fall into the hands of a variety of factions, such as smugglers and criminals.

The droidekas were designed by the carnivorous Colicoids of Colla IV, who were displeased by the limitations of Baktoid Combat Automata's basic B1 battle droids, and chiefly manufactured on their homeworld. The Trade Federation traded rare meats to the Colicoids as a way to ease bargaining with the ravenous insectoids, and were able to enjoy special rates on these normally very costly droids. Before the Federation's defeat following their Invasion of Naboo, these droids were usually slaved to a central control computer. This technique fell out of favor in the aftermath of said battle, however, and they would later function independently like the B2 super battle droids did. Even before that time, the droidekas on Colla IV were not slaved to a central computer, this independence rendering them both much more expensive and much more lethal.

They were more formidable than the Federation's more numerous battle droids for several reasons. They were able to transform into a "wheel" configuration, allowing rapid movement and compact storage. When they encountered their targets, each of the bronzium-armored droidekas would unfold into a tripodal weapons platform, armed with a set of two twin blaster cannons which could unleash a withering torrent of firepower.

Often, they were also equipped with deflector shield generators. The personal energy shields these projected could endure much punishment, capable of deflecting or absorbing virtually any manner of energy or projectile fire up to the level of a light artillery bolt, as well as rebuffing lightsaber blades and physical attacks. Additionally, the effectiveness of these droids was bolstered by their lack of the usual requirement for photoreceptors; instead, droidekas utilized non-visual composite radiation sensors, less likely to be distracted by light-based effects.

Droideka dispensers were sometimes used to transport and deploy these droids even in the middle of intense combat zones, proving a serious nuisance to their foes, such as the Jedi. 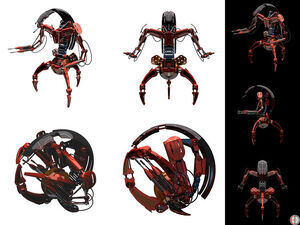 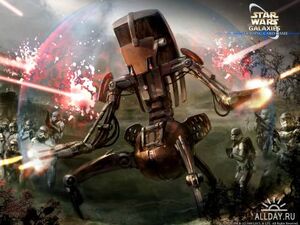